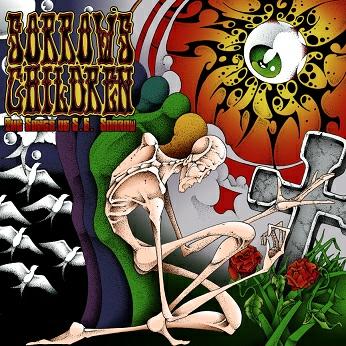 Fruits de Mer Records specialize in vinyl only releases featuring contemporary bands covering songs – many quite obscure – from the 1960s and early 1970s. And they’re coming up with increasingly interesting ideas for theme albums. The Pretty Things’ S.F. Sorrow, released in 1968, was a concept album based on a short story by singer Phil May. Quoting the promo sheet: The album tells the story of Sebastian F. Sorrow, from birth through love, war, tragedy, madness, and the disillusionment of old age. (With over 40 years of historical hindsight, it’s interesting to point out that The Pretty Things’ concept album was released a year before Tommy.)

Sorrow’s Children is a recreation of the entire S.F. Sorrow album, with each track recorded by a different band. Sorrow is born as The Luck Of Eden Hall open the album with a rousing rocker with ripping acidic guitar licks and gorgeous orchestral keys. I’ve heard quite a bit from these guys on Fruits de Mer releases, including some original songs and they’re really good. Sky Picnic’s Bracelets Of Fingers lull the listener with sitar, mind-bending guitar and Eastern percussion for some tasty trippy psychedelia. Sidewalk Society’s She Says Good Morning is a cool grooving, heavy rocking song. Hi-Fiction Science’s Private Sorrow is intense and spaced out, with a Can-like feel. I reviewed their debut album just days before this write-up and will be looking forward to more from them. Langor’s Balloon Burning is one of my favorites. It starts off pretty trippy, and then halfway through launches into blistering psych rock with freaked out electronics. Very cool. I gotta check out more from these guys. The Seventh Ring Of Saturn’s Death satisfies with cool Prog-Psych-Pop. Senrab Mendips’ Baron Saturday features funky groove rock. Extra’s The Journey starts off as an acoustic driven pop-psych tune with nice harmonies, but then turns into a surreal acid rocker with a Tomorrow Never Knows vibe. Earthling Society’s I See You features their trademark brand of spaced out psych rock. At almost 6 minutes this is one of the longer tracks of the set and Earthling Society really use the time to stretch out and jam. Jay Tausig’s Well Of Destiny is a big molten slab of space atmosphere. Jay is another one that I’ve been hearing more and more of on Fruits de Mer releases and it’s all very good. Another need-to-check-out-more artist. The Gathering Grey’s Trust is classic 60s pop-psych. We get intense, orchestral Prog-Pop on King Penguin’s Old Man Going. And The Loons end the album with a powerful rendition of Loneliest Person.

As a bonus we get a second Loneliest Person, recorded live in 2010 by The Pretty Things themselves and exclusive to this album (i.e., the band endorsed this project!). The Pretty Things continue to be active and apparently have a new live album in the works.

Sorrow’s Children will be a limited edition of 700 copies, housed in a gatefold vinyl package with sleeve notes by original Pretty Things members Phil May and Dick Taylor, talking about the making of S.F. Sorrow. At the time of this review the album is still a couple weeks from release, but I’ve got plenty of Fruits de Mer vinyl and can tell you that every one of them features beautiful packaging and artwork, making them standouts in any vinyl junkies’ collection.

2011 has been a busy year for Dusseldorf astral travellers Vibravoid, with the release of Zero Gravity, a second studio offering (their sixth all told) to complement the Minddrugs album that came out in April (as well as another live album recorded at the 2011 Burg Herzberg Festival) – truly, their cup runneth over! For the uninitiated, the band, helmed by guitarist/vocalist Christian Koch, have a mission statement that consists of bringing the great era of ’60’s and early ’70’s psychedelic rock into the present. In doing this, they are eager to draw a line in the sand between their brand of psychedelia and that which comes under the varying labels of heavy psych/stoner/doom rock. Although no stranger to lengthy live jams and improvisations of their own (check out their awesome live version of Can’s Mother Sky on youtube), Vibravoid place a strong emphasis on song craft, either of their own design, or interpretations of classic psych covers from the past. Zero Gravity contains three such covers, all previously released by the band but exceedingly hard to get hold of, plus eight originals (two of which are CD-only bonus tracks) across almost 60 minutes of music. Most of the tracks are relatively short, with the album bookended by a couple of excellent extended pieces.

Proceedings are opened by the (almost) title track Gravitation Zero, which features some gloriously woozy guitar drones and semi-chanted vocals over trademark metronomic drums in a manner which recalls ’90’s spacerock greats Farflung as much as it does ’60’s psychedelia. In a further link with that renaissance period of spacerock, the band next cover No Silver Bird, originally recorded by ultra-obscure American band The Hooterville Trolley in 1968 and covered/rediscovered by Pressurehed for the 1990’s Cleopatra Records spacerock compilation Space Daze. Vibravoid’s version more than does justice to past renditions, and it is great to see a lost gem like this reinvented for the 21st century. The short Travelling Without Moving references the minimalist vintage keyboards of Florian Fricke’s Popul Vuh, while the sparkling psychedelic pop of Photosynthesis In Darkness and Eruptions Of The Green Sun evoke the spirit of hippies, yippies and London’s UFO Club. Shot Gun Wedding is an Eddie Cochrane cover, although you would never know from its sitar-drenched, acid-fried arrangement. Sitars return again on the six-minute The White Ship, originally recorded by Chicago psychedelic folk band H.P. Lovecraft in 1967, and echoing the 1960’s escapist dreams of The Doors and Jefferson Airplane. Get Out Of Here follows the theme of escape, although in a somewhat heavier and definitely more dismissive manner (“I don’t want your love, I don’t want your tears / I don’t need your love, I want to get out of here!”). Brainplane, the closing track on the vinyl release, encourages the listener to drift away into the void. The CD edition closes with the shimmering La Vie En Dusseldorf and the downright bizarre Radiation Zero with its random oscillators gradually morphing into an odd rhythm reminiscent of Pink Floyd’s Syd-era Pow R. Toc H.

Zero Gravity is perhaps a step away from the hard rocking psychedelia of some of their previous releases (the first half of Minddrugs, being a better example of their heavier side), but is none the worse for that, serving as a bright beam of sunlight across an ocean of heavy and dark stoner rock. Those who want to experience the summer of love transplanted into the modern era should brace themselves for a zero gravity trip through space with Vibravoid.