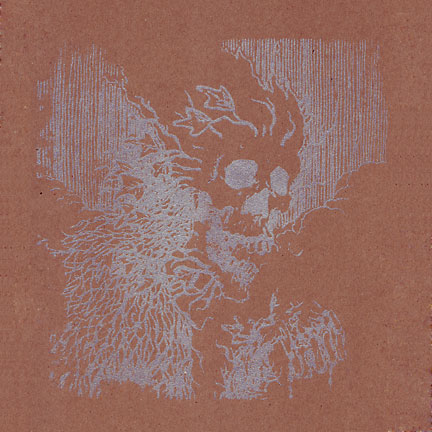 From Glennville Pennsylvania, Stone Breath began in 1995, they are not part of any scene but they are part of the earth. Mike Seed has been making experimental folk music for 20 years and The Language of Light is the duo of Rebecca Loftiss (of AntiClock Records) and Frank Suchomel, longtime experimental musicians from Stillwater Oklahoma.

Side A: Stone Breath
BEAUTIFUL AND TERRIBLE: The album opens with this very short Brooke Elizabeth vocal piece. SCORPION TEARS: Spanish guitar then deep male vocal by Don Belch and some banjo by timeMOTHeye…”strange things with wings appear, so beautiful!, and though the lamps they burn the light of Time; silently we stand here below, wondering at the darkest shadows cast by wing and branch and by the passing ghost”. Sounds like a play or live theater?! Nice flute, like alternative opera. THE SKY’S RED TONGUE: Very strange music…simple strummed guitar with lyrics and flute by timeMOTHeye along with Don Belch’s very deep voice, doesn’t sound like an American accent!? Then it goes uptempo with some Brooke Elizabeth vocals!…timeMOTHeye on the drums…I can’t really compare it to anything, which is a good thing!? Nice packaging and lyric sheet with cool/interesting lyrics! Intriguing mysterious music that continues to draw you in! More like gypsy music than psych/weird folk…gets very quiet then slowly picks back up with Belch’s strange Fiddler on the Roof vocals! All of the lyrics are by timeMOTHeye and they’re pretty great, about nature and magic, all things interesting….”mortals drift while angels dream upon the sky’s red tongue…and the wingless rise like birds. The winged cross themselves in turn and the wind becomes the word.”

Side B: Mike Seed with The Language of Light
COMMIT TO WATER: sounds like a soundtrack to a movie more than a “music” album?! Sounds of horses on the street, strange lyrics and vocals about Satan and souls…weird undertow of Electric Ladyland-esqueness behind the music!? Some nice drones. GRENDEL AT LONG MYND: yes, very musical-like but in a weird interesting way! Bizarre lyrics sung/spoke by Mike Seed and some nice instrumentation by The Languare of Light!…”now I don’t believe that silence is any kind of friend, have you seen the line that makes its way across my hand, it curves just like this road and the long abandoned farmhouse on the left that could be my head”. ROUGH OLD NIGHT: I’d almost be willing to bet these songs and the Stone Breath songs were initially recorded for some kind of musical/play project?!?! Doesn’t matter, makes for a unique, very odd album! Wish I knew what instruments Frank and Rebecca were playing? ABRAHAM’S GUEST: There’s a strange religious theme running thru all the lyrics written by Mike Seed…”they looked towards the cities of the plain…we will destroy it for ten righteous men, what will the angels find there?” Emotional outbursts of music along with the detached vocal…then goes into a piano section…lovely and haunting…and it’s over!!