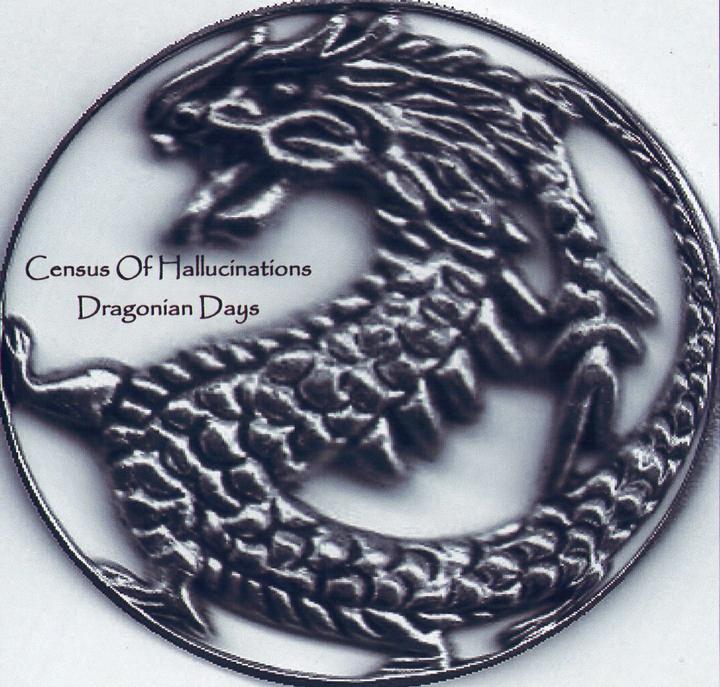 Census of Hallucinations (CoH) were on a creative roll for years, cranking out outstanding albums at a steady pace. In recent years Tim Jones and the Stone Premonitions collective have released albums by a variety of projects, like Stone Premonitions 2010, Stella Polaris, and The Global Broad Band. And now, five years after their last album, Tim has resurrected CoH with himself on guitar, vocals and scribe of all lyrics, the Reverend Rabbit on bass, long time cohort Paddi on drums, and David “Ohead” Hendry on keyboards.

The album opens with Third Shopping Mall From The Sun (for Bill Hicks), a crunchy, high energy rocking rant about consumer culture. (I Googled Bill Hicks and found a “Third Mall From The Sun” YouTube video in which the comedian spews a diatribe against Debbie Gibson and terminal mall culture.) The title track features Tim cranking out ripping guitar on this hard rocking and steady grooving song. Ultra Violet is another killer rocker with great guitar, all setting the stage for Tim’s acerbic lyrics, singing of the world’s handful of pied pipers whose “lies are like radiation, infesting the minds of the nation”. The Delivery Man is a dark moody rocker played at an unsettling rhythmic pace.

The guitar licks sting like a wasp on Hologram, the burn made all the more delicious combined with the jazzy rhythm guitar. I love the end of this song. The band has been rocking hard while Tim harangues about his favorite topic – the few that prosper at the expense of the many. But he firmly grabs our attention by transitioning the music to something more peaceful and lulling for the final verse, explaining that if we want change, we have to love everything and, perhaps more importantly, be what they don’t want us to be.

Semantic Change is a funky rocker with some of Tim’s more playful and poetic lyrics. Stupid Guitarist is a spacey ambient jazz piece with humorously self-deprecating lyrics. I really dig the off-kilter rhythmic pace and ambient jazzy vibe that starts off Modus Operandi. But the music makes intriguing shifts, as if it’s trying to mimic Tim’s increasingly caustic invective against the powers that be. Certainly one of the most interesting songs on the album and the one that took the most listens for me to wrap my head around. Finally, Age Of Light is a solid rocker that closes the album with Tim’s most optimistic lyrics of the set – The tower of Babel is falling down. Cast out the dark and let in the light.

CoH has always been about the combination of well-crafted music and socio-political lyrics that often border on rage, and Dragonian Days demonstrates that Tim hasn’t mellowed one bit – His cynicism, wit, AND smoking guitar are all well intact. And with Paddi, David Hendry and the reliable Rev, we’ve got the same crack, tight-as-a-knot band that CoH has always been. Welcome back…

For more information and song samples, visit http://aural-innovations.com/stonepremonitions
Purchases can be made at the Stone Premonitions web shop: http://www.stonepremonitionswebshop.com