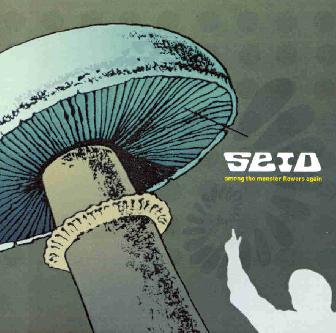 This is an LP-ONLY reissue of a CD released in 2002 – but I received a promo-CDR only, so I cannot comment on the packaging. Scott Heller’s review of the original CD release can be found in AI issue #19.

Seid are a super spacerocking combo from Norway. The album starts off with the great title-track theme fading in, a marching riff with lotsa great space-synth, but quickly kicks off into the totally awesome Fire Song – this is riff-heavy space-rock, and a great vocal here – I prefer it to some of the album’s attempts at singing, this is more of a raw growl, and a very impassioned one. Then again, the singing style vocal in the bridge is excellent as well, and accompanies a beautiful melody with intoxicating keyboards…and then some sitar…before they launch back into the main riff. Jellyfish – these vocals are so silly, even somewhat annoying (“Psyche-jellow-ish”??). Only a band whose second language is English could come up with this – such a dynamic often leads to cool sounds, but not so much here. The music is wacky, too, but in a good way – lots of different instruments play the main theme, including clarinet, bassoon, banjo – and there are loads of swishing and swooshing synth…finishes off with a nice Theremin whirl. Nice cosmic Floydish guitar stylings in the mellow intro to King Leon, eventually turns into a heavy organ/guitar-driven tune – I thought he was shouting “King Lear!”, until I looked at the track listing. Next is 5/4 – another beaut of super cosmic rock, nice mellow groove, better singing, more terrific keyboards, Mellotron, nice weeping-guitar stylings. The last couple minutes of this track is a decent electronic piece, which I might have preferred to have been tracked separately.

Lois Loona is not a fave, but even this tune provides an excellent onslaught of aggressive guitar and ‘tronics about half way in. The moody The Tale of the King on the Hill was not one of my initial favorites, but it keeps growing on me – the guitars have a twangy jangly ’60s effect…I don’t know what they call it, I’m sure there’s a term for this technique. The second half of the track gets into a great power-riffing groove – I haven’t quite come to terms yet with the term “stoner-rock”, but it seems to be pretty entrenched in the scene. Anyway, the sludginess here reminds me of that kind of heaviness, while not sounding like a Sabbath or Hawkwind clone. The Red Planet is another phenomenal mellotron-fueled high-flyer, but they only play that part once – why is this only a two-and-a-half minute song??? – It’s fucking criminal!!! Loop it. Sleep starts off slowly for me, in a minor key, but then warms up with a nice wistful riff in that jangly guitar style mentioned earlier – actually reminds me of Jimmy Page, if anyone. There’s a fair amount of Hammond organ throughout the entire album, which also lends to it having a somewhat ’60s vibe at times, but in many other ways the music diverges from that, and Seid overall have a fairly modern Euro-Space-Rock sound. Phenomenal outro, a more expansive reprise of the intro title-track – a mind-blowing mélange of organ, wild synth action, sitar, flutes, and a fully developed baritone horn section. The tuba player even plays a well-known classical riff that will probably sound familiar, though I couldn’t quite place it.

All in all, while there are a couple generic riffs and some of the vocals leave something to be desired, this is top-notch versatile space/psych-rock, played by extremely capable musicians with excellent group chemistry. You should own this in one form or another. Looking forward to hearing what came later.