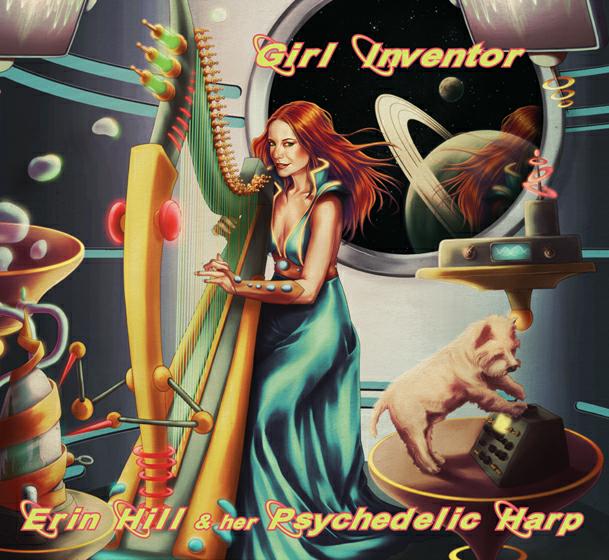 The standard process for new submissions here at Aural Innovations headquarters is that if I’m unfamiliar with the artist it takes its place in the queue and I get to it as quickly as possible. But the name Erin Hill & her Psychedelic harp along with the cover art aroused my curiosity, and when I spotted the “pop, opera, celtic, psychedelic, sci-fi” description on Erin’s business card, I had to hear this right away.

Girl Inventor is by no means space rock or psychedelic per se. But if I were limited to a brief description I’d say Erin’s “pop, opera, celtic, psychedelic, sci-fi” description pretty much nails it. The music is accessible to all. I could imagine many of these songs getting commercial radio play. The songs have solid melodic hooks, often with great rhythmic grooves, and often enchantingly seductive. But an attentive listen reveals that Erin is well off the beaten path.

The lyrics are firmly in the sci-fi/psychedelic realm. I Am A Lava Lamp really made me feel like a lava lamp being shaken (I do have a lava lamp just a few feet away from me where I write reviews). Stun is a symphonic love song for astral explorers – “I’ve gone 19 light years out of my way, just so I could happen to run into you today”. And on This Planet, with its seductive harp and vocals, Erin’s sings, “Oh this planet, I like it, I’ll stay a while”, perhaps imagining herself as a visitor from elsewhere.

A trademark element of the music that characterizes much of the album is the combination of Erin’s harp and Mike Nolan’s pedal steel, which has a spacey Bluesy sound. This is most apparent on songs like How On Earth, with its meditative feel that will sweep you away to the heavens. Ditto for Blue Slide, a beautiful soulful song with a spacey vibe. Erin also utilizes effects, but they’re subtle and used sparingly. I don’t know if it’s electronics or a heavily efx’d instrument, but there are freaky UFO embellishments peppered throughout the title track. Giant Mushroom, a song that has a cool groove and is both soulful and meditative, has some nifty shimmering effects that color the music. One of my favorite songs of the set is Lookout, Science. It opens with sitar and an Eastern feel, but quickly launches into the main theme which has a kind of 60s pop feel, but the harp and pedal steel propel the music into a realm all its own. The sitar returns for a brief solo later in the song and joins in the larger mix at the end.

Analogies are tough and I’ll avoid trying. (Well, maybe Kate Bush at times, sorta…) And cruising around her web site I see that Erin has a busy career as both a musician and actress. She does solo harp and vocal performances covering popular songs. Check out her web site for her harp and vocal interpretation of various songs, from Aerosmith’s Dream On, to Dolly Parton’s Jolene. And how about a solo harp take on Melanie’s Brand New Key? Erin also plays in a Celtic band and has performed with a laundry list of pop stars, had parts in movies, been on Comedy Central’s Chappelle’s Show, and much more.

Anyway, suffice it to say that the music on Girl Inventor is completely accessible but intriguingly out there in ways that are hard to describe. I found it refreshingly different.