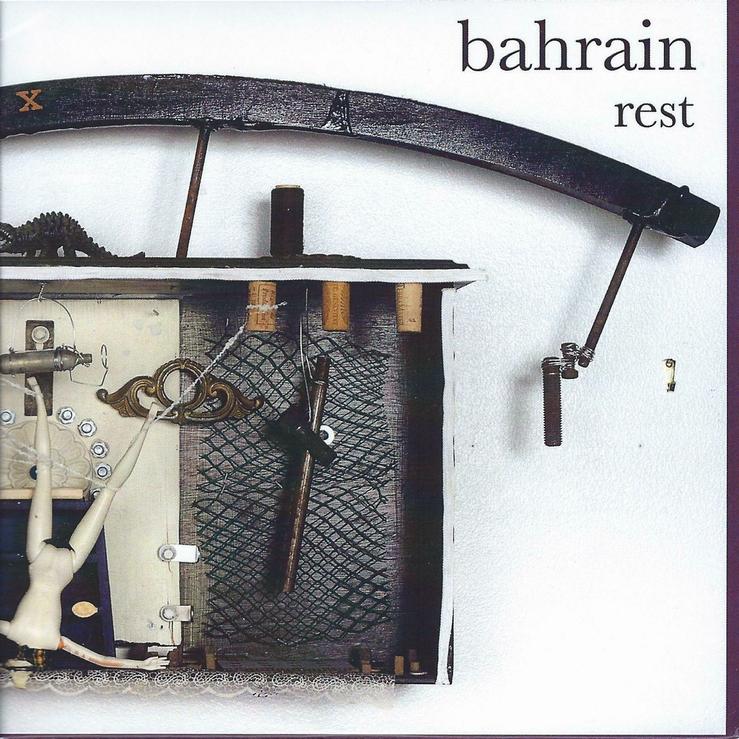 Bahrain are the Austin, Texas based quartet of D. Boone on guitars, Colleen Gugan on bass, keyboards and vocals, Mel on drums, and Scott Telles (ST 37) on bass, keyboards and vocals. The latest from the band is Rest, a 19 track set of live performances, demos, improvs and cover tunes recorded between 2000 and 2005, with some new overdubs, mixing and mastering in 2010. The group actually disbanded in 2005 but reunited for one show in 2012 to promote the release of this CD.

Among the live cut highlight are two tracks from 2004, Audio and The Death Of Magellan, which have a raw acoustic feel, along with steady choppy bass and drumming and simple but catchy keyboard melodies. Vocals on Audio are handled by both Colleen and Scott, and when Scott is on his distinct vocals instantly bring to mind ST 37. The Death of Magellan is similar but darker and I like the dissonance of the vocals and keyboard melody. There are also lots of improv tracks on the album that cover a range of territory, from the raw rock of Drone Sweet Drone, to the spaced out strangeness with lots of crazy keyboard and electronic fun of Reel Gone Loop, and the easy paced rocking alongside rapid-fire organ of Cosmic Descent Odyssey. Backstairs is a highlight, being a pretty cool 9 minutes of dark, moody, dissonant, jamming noise-psych, which also includes a simple but intense keyboard backdrop. We’re also treated to the very first Bahrain rehearsal from 2000, which is a raw jamming rocker. Monkey Calls The Tune is from a rehearsal later the same year that features screechy punk with adventurous rhythmic and instrumental gymnastics and cool keyboard embellishments. This is one of my favorite tracks of the set.

The CD also includes several cover songs, some by bands I’ve never heard. Wonder Boy sounds familiar but I’ve never heard of The Mind Splinters. Bahrain are faithful to the original on New Order’s Dreams Never End. Prog-God Peter Hammill pre-dated Punk with his 1975 Nadir’s Big Chance, and Bahrain do the song kick ass justice. Yesterday Box was the title of a 1986 cassette album by Scott Telles’ 80s band The Elegant Doormats, which Bahrain cover here. It’s steady driving punky rock with a noisy edge but solid melodic hooks and great vocals from Scott, who I think has a damn good and instantly recognizable vocal style for this kind of music. And Roky Erickson’s I Walked With A Zombie is always a fun song no matter who’s doing it.

If you’re not already familiar with Bahrain, but you’re an ST 37 fan then there’s lots to enjoy here, though newcomers may not care for the less than stellar quality of many of the live and rehearsal tracks.

There is a Bahrain Myspace page at http://www.myspace.com/bahrain
Rest is limited to 100 copies so anyone interested should contact Scott Telles at scotttelles@yahoo.com