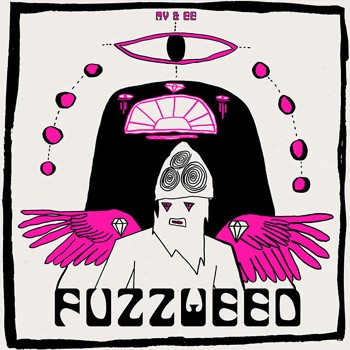 For some twelve years now, the Vermont based hippie collective MV & EE, centered on the duo of Mark Valentine and Erica Elder, have been making a wide mark across the New Weird American landscape. Whether it be their out of space and time folk songs, off-kilter Neil Young and Crazy Horse inspired rockers, their self-described “lunar ragas”, or their live extended ambient explorations, they show no signs of stopping, having released over 30 albums since 2001, rivalling Acid Mothers Temple for prolificacy. Their first album of 2013, Fuzzweed, arrives close on the heels of their last album of 2012, Space Homestead.

Fuzzweed builds on the laidback rural psychedelia of Space Homestead, but takes it further out, into the netherlands between the rustic peaks of the Green Mountains that run through the duo’s home state to the edges of something indefinable and not quite of this world. Opening cut, Environs, true to its name, seems to conjure up images of a passing countryside, but one seen through the eyes of someone tripping out on something decidedly hallucinogenic. It’s a little instrumental that’s a lovely, low key way to start the album. The pace doesn’t pick up much for the next song, Turbine (this is a seriously laidback album, folks), but it does inject a weirdly out of place electronic percussion track (similar to their classic song East Mountain High) which only adds to the otherworldliness of the song. It’s like walking from green summer fields into the fairy realms of the British Isles, but cast with a distinctly American mythology. Bridging the gap between the old, weird settings of the American countryside with a modern landscape of rundown, rusty roadside gas stations and trailer parks, Trailer Trash is nonetheless a sweet journey with strumming acoustic guitars, beautiful ghostly vocals, and acidic electric guitar soloing courtesy of Valentine (who’s vocals and guitar style both seem influenced by Neil Young’s). Jacked Up is just as laidback as the rest of the album, but with its random harmonics, like sparkling diamonds on golden ocean waves at sunset, it has a bit more of warm, West Coast vibe underlying it’s sound.

But it’s the 20-minute long Poor Boy Excursions that really define that ‘caught between this world and the next one over’ sound. Comprising pretty much all the aspects of their style, it starts with some dusty, acoustic slide guitar and Erica Elder’s distant, dreamily sung vocals, as the duo runs through a version of the old blues standard Poor Boy Blues. Pure and simple, it’s as rooted in the earth of the American landscape as one can get. There is, however, an ominous organic drone that slowly builds underneath, leading the listener onwards into the next section of the piece titled Long Way From Home, suggesting we are now getting further and further away from the rural countryside where we began. The title comes from Poor Boy, Long Ways From Home, the sometimes alternate title of the opening blues number, but the blues are left behind here as space guitars, strange voices, wandering bass and tumbling percussion begin to weave a vast psychedelic tapestry of sound. Perhaps we’re now sitting atop Mount Mansfield, the highest point in Vermont, caught between the earth and the cosmos, and we’re ingesting some hallucinogenic substance, preparing ourselves for a journey beyond. And that’s exactly where the last part of Poor Boy Excursions, its title of Environments echoing the opening track, takes us. Environments is actually a piece the duo, along with members of their collective, often play live. This is the band in their lunar raga mode, with rambling Indian percussion and sitars balanced out with droning, lyseric guitars and spacey synths. Here, recorded in the studio, Environments takes on a new crispness as every note and microtone comes out. The sonic quality is deep and expansive, and if the listener closes his or her eyes, then, like its title suggests, it envelopes you, surrounding you in a new cosmic environment where anything seems possible.

Fuzzweed is not the kind of psychedelic music to get up and dance to, it’s the kind to sit back and relax to, letting your mind and spirit wander. Burn some incense, but instead of the exotic scents of sandalwood and patchouli, try some distinctively earthy and American ones like sage and cedar, and take the journey.