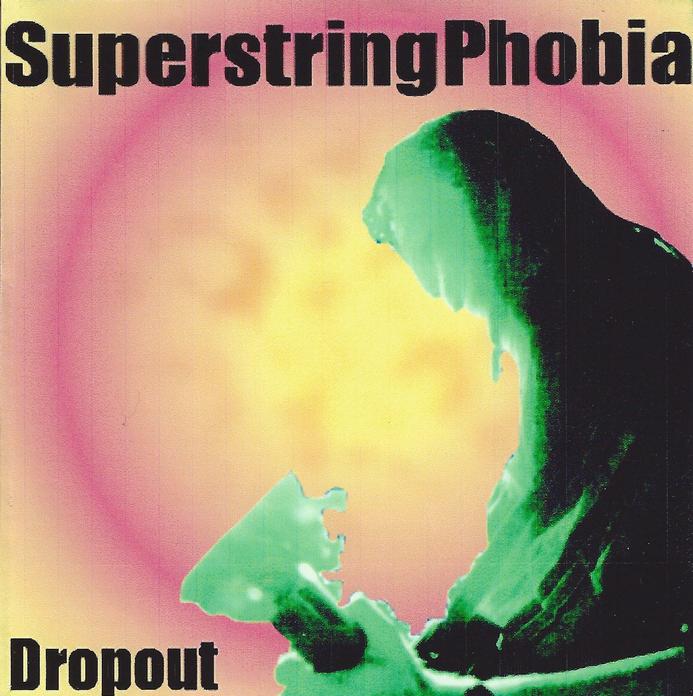 When someone chooses to name their band/solo project after a fear “of wanting to explain all of the particles and fundamental forces of nature in one theory by modelling them as vibrations of tiny supersymmetric strings” (see Wikipedia for further details), you can imagine Dropout being one of those albums that acts as a soundtrack for researching a Masters in Astrophysics. However, fear not; you don’t have to be a rocket scientist to get absorbed by the pulsing beats, hot electronics and razor sharp guitar lines of Superstring Phobia, the brainchild of Leeds-based David Sanderson, who plays and programmes every sound on the album.

Dropout comes across as an intriguing mash-up of Ozrics-style spacefunk, krautrock, and techno, as opposed to the more brain-thumping and bass-heavy school of traditional spacerock (yes, that is Hawkwind I am talking about!). The album opens with Lunar Descent, which features a jarring beat that brings to mind Kraftwerk’s Musik Non-Stop for a few seconds before a series of processed guitars swoop down from above. After a brief Steve Hillage-style lead break, the layers of electronics return, weaving in and out of the guitar lines to form complex layers of sound that could be a highly funked-up version of Throbbing Gristle. The title track, with its funky intro and underwater electronics owes an obvious debt to Ozric Tentacles (think Sploosh!), and is certainly none the worse for it. This is definitely spacerock that would not be out of place on the dancefloor. With that in mind, the following Haunted Dancefloor is three and a half minutes of synthesized electro-beats, almost closer to dubstep than spacerock. The way the different layers of electronics fit together in such cosmic patterns is quite amazing. Highly processed guitars return for Funk Implant, with the jerky rhythm sounding a little like Shriekback’s Pretty Little Things, before a soaring rock guitar solo (again reminiscent of Hillage and perhaps Ed Wynne) rises above the electro soundscape. Outer Space Rock doesn’t exactly rock, but rather squeezes its insidious way into the senses like a spacier version of The Prodigy, while lightening fast guitar lines skate across the electronic beats. This is followed by the nine minute Sonic Guru, providing further variations on the guitar/synth network theme. Inside The Kaleidoscope Mind slows the pace with an off-beat rhythm that almost sounds like it is tripping backwards over itself. An epic, almost melancholic, rock guitar solo rises above the swamp of electronic noise on Psychic Stream. The album concludes with New World Orbit, a medium-paced workout of interstellar guitar and beats.

Other than the artists namechecked above, Superstring Phobia reminds me of guitar-meets-electronics bands like Space Mirrors (but without all the dark bits) and Psy Corps; it doesn’t so much rock as overwhelm you with layers of sound. All-in-all, a great album from a visionary multi-instrumentalist. Also worth a listen is his trans-Atlantic project Nebulous Amphibians with San Franciscan Jon Drukman, again in awe of Ozric Tentacles and accessed via the link below. (CLICK HERE to read the Nebulous Amphibians review we posted)

For more information visit Superstring Phobia at: http://www.facebook.com/pages/Superstring-Phobia/135604409923480
David’s work on the Nebulous Amphibians can be heard on http://soundcloud.com/nebulous-amphibians
Email David Sanderson at: info@echostun.com