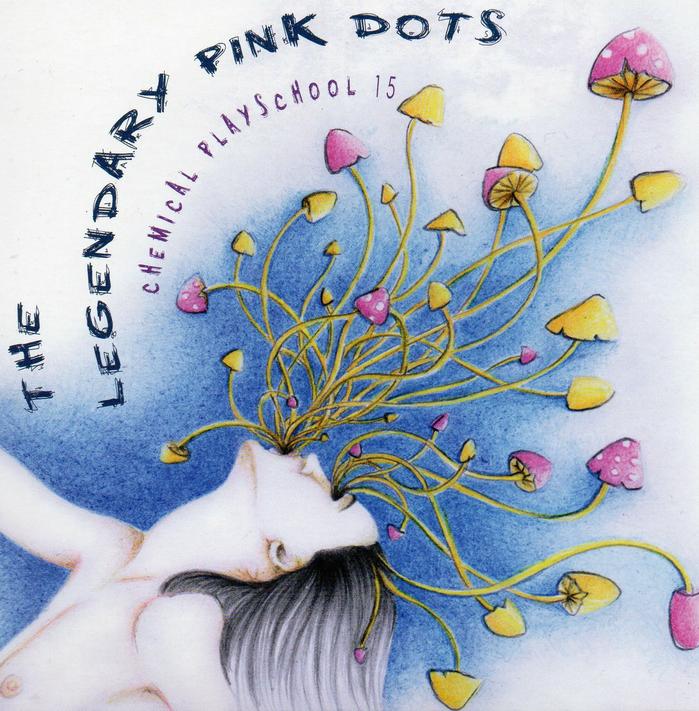 The Legendary Pink Dots are an esoteric underground communal Beatnik collective phenomena and a band I avidly collect and listen to often for the past 15 years, ever since discovering them at a gig in Oslo, a review which can be found in the old index on the old Aural Innovations page, spring 1998 issue. Please CLICK HERE to check it out before reading this review.

Most of my favorite material of theirs was produced between 1980 and 1998, despite lineups and sounds that changed drastically during those eras, the band adopting sounds ranging from electronic underground pop-goth (Brighter Now, Curse) to sprawling progressive concept LP’s in the 80’s (The Tower, Asylum) to full blown spacerock in the 90’s (The Maria Dimension, Hallway Of The Gods, From Here You’ll Watch The World Go By). Since the band’s humble beginnings with the 1980 Chemical Playschool 1+2 cassette releases being early favorites, found collected on The Legendary Pink Box; Ancient Daze and Stained Glass Soma Fountains compilations, like much of the later Chemical Playschool releases like 3+4 and 8+9 as well, having been blown away by them live the 3 times I have seen them play Oslo, in 1998, 2009 and 2011, they never disappoint with a live show, and very rarely with an album release. On Chemical Playschool 15 the linup is unchanged from the latest album, with core members Edward Ka-Spel and The Silverman who founded the LPD’s together with some wonderfully artistic psychedelic post-punk musicians in 1980, and in 2013, recruits Erik Drost, and Raymond Steeg are present as well. For those who are curious if it is the same Mr. Steeg that worked with Hawkwind between Distant Horizons and Canterbury Fayre” albums, yes it is the “missing link” between two of my favorite musical ensembles, the very same Raymond Steeg we have seen credited in Hawkwind CD’s as sound man.

The problem the post-Millenium lineups of the LPD’s is that they get too abstract and non-musical, creating “noise” music or “drone” music, if one likes those descriptives. A few odd albums here and there are still “rock” or “kraut” or “psychedelic” and at least contain “songs”, like the latest studio album proper, Seconds Late For The Brighton Line a few years ago which I have both on CD and on double LP. But alot of LPD’s output elsewhere, most notably Edward Ka-Spel’s post-Millenial solo material, is abstract loop and electronic experimentation, like on this 15th Chemical Playschool edition. The series set out to capture the closest to the Dots’ creative collective / communal “playschool” approach to churn out as much obscurantic material as they are capable of as they live and breathe as a creative entity, with a band that has a sprawling miasma of mythology and internal cross references over the years, be it The China Dolls or the ever ominous Premonitions. During the years, you may have been busy taking exams at The Chemical Playschool but was too stoned reading your Obituary to notice The Cloud Zero pass over and you ended up as a Broken China Doll at The Terminal Kaleidoscope. What do you do then? Join a Cult? Now, CP15 leaves me underwhelmed and a little afraid that the band seems to be treading water towards their 33rd year of existence, with no mythical LPD mythology to expand upon. This is scraping the bottom of the barrel, you dedicated Dotheads and all ye Monk like followers. My last 3 favorite LPD albums were All The King’s Men in 2002, Your Children Will Placate You From Premature Graves from 2006 and Plutonium Blonde from 2008. They were solid, psychedelic, songs balanced out with abstract pieces, all in all fine efforts. This is a band that has been on labels like PIAS and ROIR, so they carry weight of authority as well.

The opener Immaculate Conception is throwaway electronic sound sculpture with phased quasi-psychedelic guitar echo effects and a rubbish lyric that goes repeatedly, “I live at the center of the Universe…..” etc. etc. ad infinitum. There is nothing that jumps out and “grabs you” on CP15 except for some brief interesting moments, some of the film samples and Edward’s monologues 11-19 minutes into Sparks Fly / Museum, the second track. The Opium Den Parts 1-3 is a long experimental track with half spoken vocals, with some acoustic guitar 5 minutes into the song. AAAAARGH!!! HULK MISS THE 80’s & 90’s DOTS! HULK SMASH!!! Yes, I get agressive when I hear experiments that fail. I get angry. Track 4 is called Ranting And Raving and has a spoken intro and more weird ambient interludes. IT REALLY DOES NOT GO ANYWHERE. Excpect no more when Edward returns on vocals over a noisy backdrop, some ranting that does not inspire me at all. It’s directly unlikable. Immaculate Conclusion has echoey chanting voice from Edward and ambient noodling. It really is formless, mis-shapen and most of all uninspired. It sucks. Life with The Dots is no longer like running away to join a travelling Circus or meeting Gypsy caravans at night to get your fortune told with Tarot cards or gaze into a Crystal Ball. So hide your wings in a ghost tower, sails crackling at every breath you take, The Madcap Laughed…. AND NOW HULK SMASH CP15!! HULK ANGRY AT EDWOOD, PLAN 9 FROM OWTEW SPAFE! So the verdict is, I am pissed off that I bought Chemical Playschool 15 but as I collect and adore this reputable band and will never give up listening to them, I will brace myself for future experimentation and take anger management courses. Avoid. I never thought I’d ever say that about a Dots album. S.O.A.B.!!!