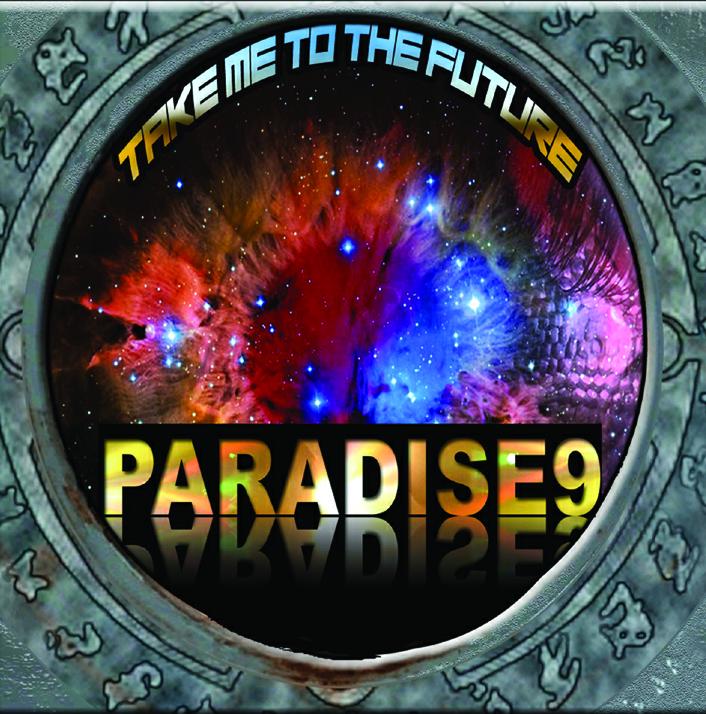 Paradise 9 have been around for a while now, releasing their recorded debut – Showtime – in 1999, before taking what appeared to have been a lengthy haitus. Their reconvening for charity gigs, and release of two new EPs – Nothing For Tomorrow (2009) and State Of The Nation (2011) – marked the beginning of a more productive era for the band, who have now recorded and compiled their second full length album. Take Me To The Future (a Hawkwind referencing title if ever there was one) clocks in at a generous 75 minutes, with twelve tracks in total, seven of them from the recent EPs, and five new ones. Whether or not you own any of their earlier material, Take Me To The Future has plenty to enjoy about it, being a diverse mixture of Buzzcocks/Wire punk-pop, Gong/Hawkwind spaceprog, Ozrics-style psychelic dub, and acoustic folk. Indeed, several of the members and sundry guests have links to such free festival staples as Here & Now, Mick Farren’s Deviants and, inevitably, Hawkwind.

Album opener Digital Signs is one of the new tracks presented here, and calls to mind Robert Calvert’s techno-hacking On Line, with the distinctive Joe Strummer-like vocals of Gregg McKella. Musically and thematically, it serves as a logical progression of the title track from their State Of The Nation EP. Chrystalized Moment (from Nothing For Tomorrow) offers a less cautionary view of the future, and sounds a little bit like Hawkwind’s Love In Space with an additionally rocking guitar solo from Tyrone Thomas. Founding member Gregg (who provides guitar and synth duties throughout) states that the new album has an AOR feel to it, with Steve Rispin (Asia) handling recording and co-production duties. While this may be a curious choice for an agitpop punk-influenced band, the Sandy Pearlman production of The Clash’s Give Them Enough Rope shows that such seemingly oppositional collaborations can work. Nothing For Tomorrow (the title track from their first EP) contains further eco-warnings for the future set to a punky beat, while new track Kosmonaut has a dubby feel in the vein of The Prodigy’s Out Of Space. Instrumental Oceans Rise features Gregg on clarinet, sounding a whole lot like the sax honking of ubiquitous ex-Hawkie Nik Turner (who actually does appear later on the album). State Of the Nation (from the EP of that name) is more street-level politics and features the guitar of the late Judge Trev Thoms, as does Distant Dreams (albeit in acoustic mode). Point Of View somehow manages to be both punky and catchy, propelled by a driving beat and featuring an extended instrumental outro of clarinet and spacey keyboard sweeps across eleven minutes. The short and sharp ICU-channelling Is This The Time (from State Of The Nation) is up next, followed by two new tracks – Times Like These and Anyhow Anyway. The former has a cool dub vibe courtesy of bassist Neil Matthars, with Gong-ish gliss guitar, the latter being a great piece of power pop punk. Distant Dreams, (again from State Of The Nation) follows, and it is a stone cold hippie classic, like Hawkwind’s In Search Of Space line-up playing Led Zeppelin’s No Quarter! Finally, we get to the epic twelve minute title track, featuring the flute and sax talents of Mr Nik Turner, kicking off with an atmospheric section which sounds a little bit like his Axe Eugene Pink Floyd cover. The message of optimism conveyed by the lyrics may be naive, but it is nice to know that there are even still people out there who are willing to state their case for an alternative future.

Now obviously, there is a fair bit of material on Take Me To The Future which has been released on the two previous EPs. Having said that, the five new tracks are all great, and at least up to the standard of anything that has already come out, and Take Me To The Future serves as a great introduction to a hard working and straight up band who deserve to be heard. Buying it might not be enough to save the world, but it will definitely serve as a pretty cool soundtrack to whatever way the dice might fall.

For further information or to purchase the album, go to http://www,paradise9.net or http://paradise9.soundawesome.net