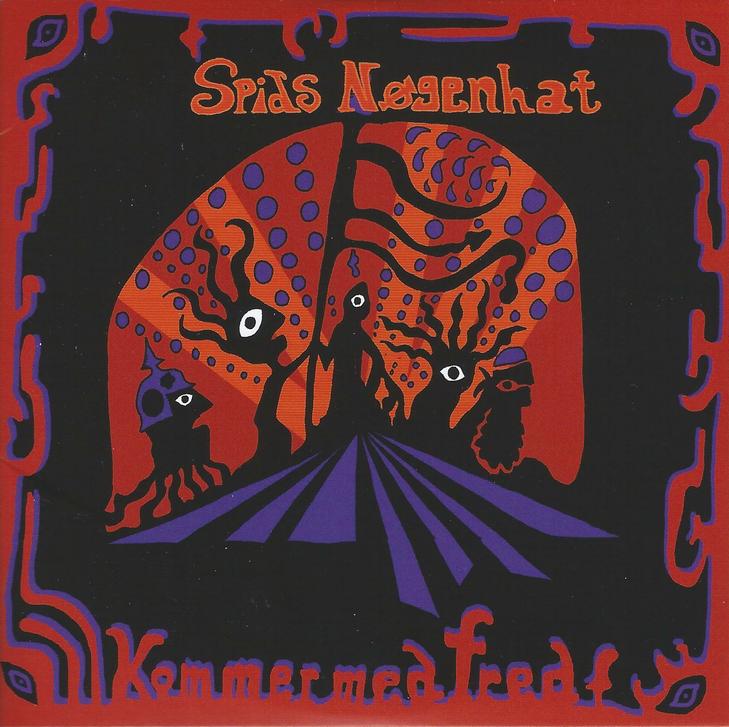 Spids Nogenhat (Danish term for magic mushrooms) originally formed from members of On Trial, a band that produced numerous offshoots, including Ghost Rocket, Black Beacon Orchestra, and, perhaps best known to Aural Innovations readers, Baby Woodrose and Dragontears. Twelve years after their 2001 debut, Spids Nogenhat release their second album, Kommer Med Fred (Danish for We Come In Peace). The album is 38 minutes long, with 7 original songs and one cover.

After a high intensity oscillators plus acoustic guitars blast off, Mere Lys launches into a catchy song that can only be described as a space rock version of Baby Woodrose. And the spirit of Baby Woodrose is very much in evidence throughout the album. Lever vi Nu? is an acoustic driven spaced out slab of psychedelic pop. The lyrics may be in Danish but damn, these are all such a catchy songs. Lolland Falster is an easy paced tune with a bit of a garage folk-psych feel, and has a cool combination of 60s west coast guitar, bubbling liquid psych guitar, and searing acidic licks. Vand, Brod Og Te is similar but without the acid licks. Spids Nogenhat I Graesset explores similar territory, being both steady paced and intense, and its warbled psych guitar leads have a sharp sting. Jorden Kalder is a trippy psychedelic magic carpet dream ride. Fred goes in a different direction, being a freeform freak flag waving pagan folk-psych trip that sounds like it would be at home on one of the first couple Spacious Mind albums. And then there’s Den Gennemsigtige Mand, a cover by a band I’ve never heard of called Furekaben. A little Googling reveals them to have been a Danish band that existed from the late 60s – early 70s. I couldn’t find this song but listened to a few others by them on YouTube and hear lo-fi and completely freaky acid-pagan folk. Spids Nogenhat make the song dreamy/trippy but also inject an anthem-like quality. Another great combination of guitars, with spacey fluttering patterns and gorgeously tasteful and ripping acid leads.

In summary, if you like Baby Woodrose you’re guaranteed to like this. It’s definitely on the spacier side. It also fits well with the Bad Afro label theme, and kudos to these guys for so consistently releasing such high quality psychedelic music.

For more information you can visit the Bad Afro Records web site at: http://www.badafro.dk
Visit Spids Nogenhat on Facebook at: https://www.facebook.com/spidsnogenhat