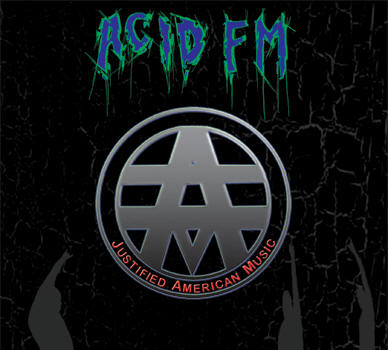 This Stoner//Detroit/Metal crossover Power trio who are called Acid FM hail from North Carolina and their main ringleader and possibly sole remaining founder is named Sparky Simmons. They have been around for nearly a decade already, lurking in the shadows of small labels and appearing on obscure local compilation releases. I think I saw even a mention on the first Spaceseed album with Nik Turner along with some other familiar names. Sparky should be known to some readers of Aural Innovations as the newly welcomed current guitarist for the international space-metal collective-project based in Moscow, and led by the ever talented and sultry Alisa Coral, the band we call the mighty “Space Mirrors”! Acid FM and Space Mirrors even put out a great split 7″ single on red transparent vinyl a couple of years back on Sparky’s own Monsterfuzz Records label, with Acid FM and Space Mirrors sharing each side of their own on the record, which in turn was housed in a nice Kevin Sommers sleeve, the artist who does all the jazzy photowork and eye candy for the current Space Mirrors releases, as well as all the art for ex-Hawkwind bass Assassin #2, Alan Davey’s various bands and solo projects, and, lest we forget, the ever chaotic festival spacerockers Pre-Med’s product as well, always being adorned with Kevin’s unmistakable “Golden touch”.

The latest incarnation of the Acid FM we find on these two CD releases consists of Sparky Simmons on vocals/guitars/synths, longstanding Doc Obergefell on bass/synths, and newest recruit Jeremiah Johnson on drums/percussion. The Justified American Music CD has 12 tracks, and the opener is called In The Blink Of An Eye and sets the tone throughout the CD, with monster thrashy riffs, solid songs, hard rockin’ right through to the closing piece, being a cover of Black Sabbath’s ur-classic War Pigs, which they pull off with more than a little amount of doom-delivered panache. The CD clocks in at just under 59 minutes and is a heavy testimony to blissed out stoned and heavy thrash influenced metallic rock’n’roll they crank up without getting noisy or droney or rubbish like alot of other “stoner” bands get (I mean, Electric Wizard are the reason I forgot doing any real drugs anymore). The format is basically metal measured by a lager of 4×4 liquid tonne oxygen tanks of explosive nitroglyserin aboard a rickety freight train about to derail at 300 mph. down a mountainside into the Great Wall of China. Sparky’s Monsterfuzz label has also been responsible for a limited and quite mindblowing admitted labour of love, an ever so tiny and poorly distributed Monster Magnet tribute CD called Kiss To The Right Side Of Your Brain, a release which I am glad I got hold of back then when it was out on mail order from Monsterfuzz Records’ website in 2011, as I am sure the run was pretty small, making it more than scarce by now, and it is really an effort for such a small label to come out of the blue with something dedicated like that, considering Monster Magnet are pretty corporate these days and probably shit on the small guys who are all trampled underfoot by them, for all we know, in their lumbering pot-addled Fascismo Warthog & The Exploited-fallout mastodon wake Wyndorf and his truncheon-henchmen parade the the pigsty of the Atomic Age record industry with these days, God’s Appointed Stoneage Drug Retards in Rehab, The Refurbished War Pigs of The Holy Roman Empire, so to speak.

So anyway, it was only last year on Facebook, that Sparky held an informal poll on what the name of the upcoming Acid FM album should be, and the best answer was, in the end, handpicked from many entries, and decided to be Justified American Music“. This first and latest Acid FM full length release, which comes in a nice digipack with lots of dodgy photos of the longhaired rocker-blokes in the band standing around brick walls and abandoned lots, looking mean, the silver disc carefully digitally encoded with sounds being very much in their hairy staple diet style of forefathers like Kyuss and Fu Manchu infused straight ahead, no-holds barred vein of pedal-hopping ‘revolution rockin’ stoner rock with a bit of fast thrashmetal and anarchic motor city Detroit chaos thrown in the mix, it culminates in what a Justified American hard rock power trio look and sound like. They do possess some great heavy riffs and never run dry on blitzkrieg fury and Motörhead infused energy, the JAM CD and the Electronic No. 3 CD are both very consistent records, hard and heavy and fast paced. Most of the songs are bursting with vitality to rock out to the max. Acid FM do indeed take their multivitamins every day.

Following hot on the heels of Justified American Music is a 2013 release housed in a jewel case, a 45 minute extended play spread across 9 songs, called Electric No. 3. It consists of a mix of live and studio tracks which further cement the band’s metallic stoner onslaught with more live Detroit-style hellraiser leanings. Some of the live tracks are different versions of songs on JAM, and there are a few new songs as well. Its really blistering stuff that can be described, as a mad-dog power trio out to conquer the heavier side of Spacerock-as-we-know-it, without the psychedelic trappings of the genre. Hawkwind and Monster Magnet are thus named as big influences, according to Sparky’s liner notes on the JAM album, though I would not class Acid FM in any way even overtly psychedelic, even though they DO blow minds, and not at all orchestral, definitely not pastoral, never mellow, not dreamy, in no way at all “prog” or peddling to the experimental, even, no it’s just straight ahead riff-O-rama hardrock, feet squarely planted in metal and stoner, no extended freakouts, no drug addled jamming, no bullshit, unless you count the nearly 8 minute long Black Sabbath cover, its as close to a jam as they get. In that sense they brutalize the listener much like the aforemented bands like Fu Manchu do when tha’Fu are at their best with Fu Man-numbers like Urethane or Hell On Wheels for example, in other words like a loaded jackhammer pummeling at your metal brain, making old men in the know, like Lemmy, very proud of the proceedings.

I am myself currently in the midst of negotiation over creating front cover art for the next Acid FM platter due out in 2014, so we shall see what time and ideas will bring forth on the graphic side once we “Trip the Switch” and “Brainstorm” on a dream dollar deal, and cater for the bands wishes and developments and needs on that end, reaching an end, seeing something coming into fruition. We have nearly settled on images of deep space and shadowy figures, maybe, we are still in the early stage of heady metal “metalmorphosis”. Time will tell for 2014 for these three dudes if they ever break into the mainstream. This band is the essence of skill, and obviously a hard working group at what they do, it really shows, you hear they are playing their damn instruments like no tomorrow. They might as well be superstars if they ever get a break from some bigshot label or big-name producer of some sort. They aim high and produce.

Check out the links below this review, as Sparky @ Monsterfuzz is offering limited $25 discount bundles with both the Justified American Music and Electric No. 3 CD’s with the split 7″ Space Mirrors/Acid FM vinyl, also including a bonus Acid FM poster, and you won’t regret it as the transparent red vinyl item will become quite collectible as of the near future… It’s all Approved by the Healthy Trip Advisor in your Head, they are giants, and they are hardcore! Born to win! They lay down the Law! Totally! Support these three Justified American 30-something hard rockin’ pasty looking stoned white chaps… NOW!