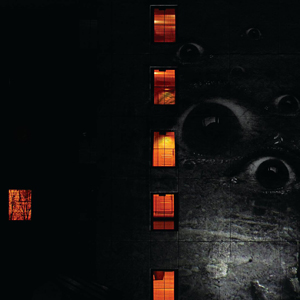 Spoke Of Shadows is an all instrumental collaboration between drummer Bill Bachman and multi-instrumentalist Mark Cook. I’ve been acquainted with Cook through his two albums with Herd Of Instinct and his Warr guitar contributions to some Djam Karet tracks. After the two Herd Of Instinct albums, Cook wanted to take his music into new directions. After some initial recordings, a meeting with Bachman and the discovery of shared musical passions led to the debut self-titled Spoke Of Shadows album. The CD consists of 12 tracks, with Bachman on drums, Cook on Warr guitar, ADG fretless bass, guitar and keyboards, plus guests on guitar, flute, piano, and Djam Karet’s Gayle Ellett on Mellotron and Rhodes.

King Crimson is a powerful influence, though Spoke Of Shadows take that inspiration in a variety of directions. Among the highlight tracks is Dominion, which creates an atmosphere of high intensity Doom-Prog, and within that context weaves a varied path that recalls Discipline-era King Crimson alongside Red-era riff rocking, plus intricate Warr guitar patterns and cosmic orchestral keys. King Crimson is at the forefront on Harbinger, but there’s much more going on, as in addition to Frippoid guitar we’ve got a monster rocking shred solo and some Jazz-Fusion guitar, plus a beautiful flute and Warr guitar duet for the finale. I like the doomy intensity of Tilting At Windmills and the way it alternates between Metal charged King Crimson attacks and orchestral-Prog breaks that can be both airy and quirky. And Dichotomy has a head spinning array of guitar and Warr guitar leads.

But there’s also a dreamier Ambient-Jazz and orchestral Prog side to Spoke Of Shadows. I love the cool Jazz and Mellotron combination on One Day, and the rocking guitar leads, fretless bass and flute solos against a flowing orchestral backdrop on Images. The Space-Ambient-Prog-Jazz, King Crimson-ish guitar and funky freaky effects are a treat on Persona. I love the flute, fretless bass and Mellotron combination on the ambient jazzy Splendid Sisters, wrapping up with a lovely sense of floating dreamy drift. Among my favorite tracks is Pain Map, which starts off with Ambient-Jazz and a cool rolling funky groove, plus a parade of varied sounds in the guitar solos and crunchy metallic bursts, eventually developing into a Metal infused slab of heavy but atmospheric and still grooving Prog jam, and then closing with a dark chamber ensemble and UFO efx’d finale. My other favorite is Drama Of Display, with its freaky synth work that brings to mind an Ambient-Jazz-Prog morphing of King Crimson and Ozric Tentacles.

Most of the songs are in the 2-5 minute range, though there is a lot happening in these brief statements. In both composition and execution the music is complex, but evolves such that it flows smoothly, and it’s not uncommon to feel like I had experienced multiple movements in a 4 minute piece. In the Prog world, turn-on-a-dime transitions can be mightily impressive in compositional and instrumental proficiency terms, but Spoke Of Shadows largely eschews abrupt transitions, making it all happen quickly but sleekly, so that I typically would simply become aware of theme shifts rather than swerving along hairpin curves. An impressive marriage of multiple musical worlds.