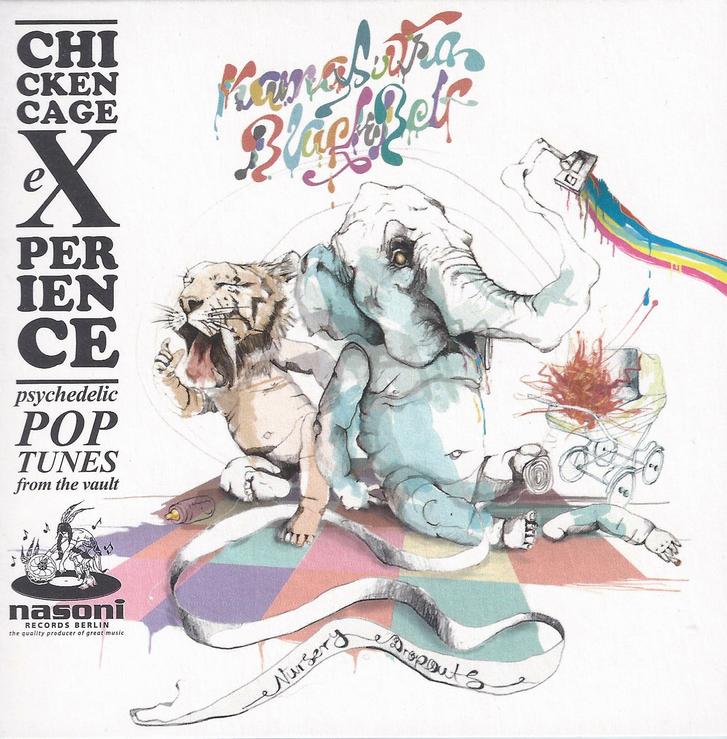 Chickencage Experience is a side project of the German band Polytoxicomane Philharmonie and KamaSutra BlackBelt is their second album. The first album, An Eggspoiltaton Movie, consisted of 6 tracks in the 10-17 minute range that developed from improvisations, and was accompanied by a DVD film of professionally shot images and narration. The new album is appropriately sub-titled “Psychedelic Pop Tunes from the Vault”, as 7 of the 10 tracks on this 47 minute set consist of structured songs in the 2-5 minute range.

One of the benefits of the tighter song focus is that vocalists H.M. Fishli and Michaela Flame really shine. Among the highlights is Mayday Sister Mayday, a trippy, spacey, jazzy, rocking song, with great guitar, sax and soulfully psychedelic vocals. Top Secret is similar and I like the deep space atmospheric carnival finale. I dig the dreamy yet rocking spacey psychedelic prog-jazz of Werküken. Shaken Not Stirred has a nice floating feel with its orchestral strings, though it soon breaks out into a heavier rocking song. At under two minutes, An Ocean Full Of Gold is the shortest song of the set but it packs a punch, being a cool and freaky grooving jazz song that conjures up images of a psychedelic lounge for Beats and hippies in tuxedos and gowns.

There are three songs that stretch out a bit more, each clocking in at the 8 minute mark. Thousand Miles features psychedelic pop-jazz with a drifting groove and great vocals. Still Flaky But Free starts off as a funky and flowing pop-jazz tune, with fuzz-wah guitar and cool horns. Then it takes off into a killer spacey prog-jazz instrumental workout and includes some of the most soulfully stirring vocals of the set. The album closes with Whitewash, a cool grooving instrumental space-jazz jam, with a great Rhodes keyboard sound and the most spaced out guitar leads of the set.

In summary, though KamaSutra BlackBelt is more structured and song focused, there are still plenty of genre bending mixes of music and a playfully joyful sense of fun pervades throughout. If you’re a Polytoxicomane Philharmonie fan who hasn’t yet tried the Chickencage Experience, it’s really not that musically far off.

For more information you can visit the Nasoni Records web site at: http://www.nasoni-records.com