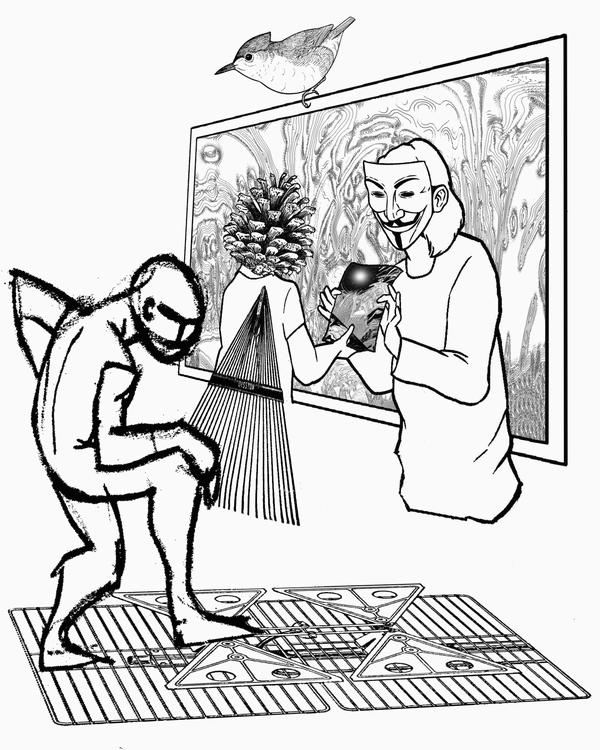 Caricature Masquerade is a collection of unreleased collaborative recordings among artists that have appeared previously on Taped Rugs Productions releases, as well as some who are new to the label. The common thread throughout is Taped Rugs founder and head honcho Charles Rice Goff III. I’ll borrow liberally from Goff’s explanations of the source of each piece.

There are four tracks that first appeared on Suite For Zero Gravity Ballet, a collaborative collection of interstellar space music released by Ecco Hollow in 2013 (CLICK HERE to check it out). Each track was mixed by Goff, who added sounds, applied effects, and made careful edits to recordings supplied by the artists. Circus Of The Stars, with David Fuglewicz, consists of an electronic pulsating throb, toy instrument melody (like a marimba), and all manner of clattering sounds. Later the electronics get even more interesting, blasting off into bleepy blurpy space and accompanied by what sounds like electro giggling. Ionic Pentameter, a collaboration with Brava Centauri, features odd rhythms, freaky electronics, spaced out voice samples, concert piano, and a fun efx’d pastiche of sounds and instruments. Lovely Lady Of LEDA 25177, with Darlington Pair, is a highlight, being a spaced out collage of Trance music and grooves, melodic soundscapes, ghostly howling chant vocals, and other fun effects. And Antarean Vocabulary Lesson, with Total E.T., is a head spinning glom of electronics.

We also have some collaborations between Michael LaGrega and Goff. Wyandotte Winter was recorded by the duo in 2010. Goff later created a psychedelic video of wintry scenes from Wyandotte Park in Kansas City, Kansas, which he embellished with this recording as its soundtrack. The video was released on a Taped Rugs collection entitled Don’t Drag Cords Around Corners. The music is a combination of intense electronic Psychedelic concerto and Residents styled soundtrack. Goff has done lots of very interesting video work and this is a fun collection. (CLICK HERE to check it out.) What It Means To Be Whole was recorded by LaGrega and Goff Kansas in 2011. There’s a lot happening in just three minutes, as the duo rifle through a parade of themes. It starts off with a light melody that sounds like an old organ demonstration combined with space electronics, but then abruptly switches gears to a tribal/playful/orchestral mix, followed by a Goff vocal piece, and then a cauldron of space electronics surrounding a narrative bit from an old movie. It’s impossible to adequately describe this piece but I’ll say it’s my hands down favorite track of this set. Subjective Matter was recorded by LaGrega and Goff in 2010, and the following year Goff created a Dadaist video to illustrate the recording for Justynn Tyme’s Dali Krab Holiday. The music includes cavernous atmospherics, an unsettling flittering electro pattern, church bells, string manipulations and sundry other sounds that make for a spacey, haunting and sometimes sinister feel. I enjoyed this for the purely oddball array of moods. The video was released on a Taped Rugs collection entitled Psych Pshow in 2012 (Another Goff video I recommend. CLICK HERE to view.)

There are two lengthy tracks that are outtakes from the collaboration between Big City Orchestra and Goff entitled Reflected Imprecations (CLICK HERE to check it out). dAS of Big City Orchestra added sounds, applied effects, and made careful edits to recordings supplied by Goff to create these tracks. Paregoric is like some kind of avant-space soundtrack, combining strangely rhythmic Trance music and DJ grooves with a collage of freaky sounds and voices, and trips along a pleasantly oddball alien path. Opium creates a haunting Gothic atmosphere and ominous alien presence, bringing to mind a spaced out Residents Mark Of The Mole soundtrack.

Finally, The Four Walls Of Tomorrow is an outtake from the collaboration between Justynn Tyme and Goff entitled Raydio Bradcasts – Mrs. Morris Goes To Mars. Tyme added pre-recorded materials, applied sound effects, and made careful edits to recordings supplied by Goff to create this track, and I highly recommend this to fans of old radio broadcasts. Tyme and Goff do a good job of creating a fun old time radio feel, which also includes spaced out soundscapes and experimental free improv music. It’s different. (CLICK HERE for the entire Raydio Bradcasts.)

Caricature Masquerade can be downloaded for free at: https://archive.org/details/CaricatureMasquerade
If you are interested in a CD, email Charles at: padukem@sbcglobal.net
For a mind boggling array of information and catalog of releases dating back over 30 years, visit the Taped Rugs Productions web site at: http://www.tapedrugs.com