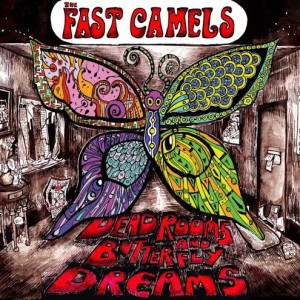 It took them a while but Glasgow based 60s influenced Psych combo The Fast Camels have finally followed up their 2007 debut album. Apparently the band experienced a membership shakeup, awkwardly prior to a scheduled appearance at the 40th anniversary Monterey Pop Festival. They regrouped with new members in 2010 and the result is the 12 song Dead Rooms and Butterfly Dreams.

I’m struck by the musical variety across these tracks, relative to the first album. One thing that hasn’t changed is that these guys can write a song, and someone knows how to craft it all in the studio. Bruisy Bedlock is a schizophrenic song that’s pure Syd-era Floyd in the first half, with its mass of freakout guitars surrounding a dark yet melodic tune. Then the band shift gears and launch into a funky thrashing Pop-Psych rocker that’s like the Hollies with Keith Moon on drums and an ever looming acid guitar. The spirit of Syd returns on the brief but satisfyingly strange Kelvin. Ditto for Camera Assassin, which has an Astronomy Domine vibe and rockets off into space. This is one of my favorites of the set. Another one of my favorites is Golden Greeter. It starts off as stoned garage Psych with Jim Morrison styled vocals, before switching to bouncy, power rocking Pop-Psych, while retaining the garage guitar and traversing a variety of surreal, freaky instrumental territory.

Other highlights include Cecilia Deal, with melodies and vocal harmonies that recall the Hollies, but with spaghetti Western guitar twang and Psychedelically snaking guitar licks. I like the bouncy tra-la-la Pop-Psych of Ken’s Sad Vice, which includes a cool 60s organ sound and trippy guitar. Penny Pinching Debt Collector begins as a light acoustic guitar and piano tune, before launching into a darkly cavernous Psych rocker with some nicely stoned instrumental segments. I enjoyed the orchestral Power-Pop of Park Day and My Little World. Cobbler Clarence is a standout, starting off with a blend of funky, soulful, theatrical swing, then later exploding into a Power-Pop rocker with passionate vocals and contrasting light harmonies. All Day Breakfast gets into some of the album’s darkest territory, mixing frantic Psychedelic Power-Pop with an acid-metal Goth vibe. And The Ballad Of Berty & Johan includes some of the set’s mellower moments, yet still jams and grooves.

In summary, The Fast Camels are, at their core, a 60s influenced Pop-Psych band, but they don’t restrict themselves to a simplistic verse-chorus-verse format. These guys incorporate lots of stylistic variety and Psychedelic freakout elements into their structured songs, and a sense of the surreal pervades throughout. A fun set of songs.