Get On Jolly – “Why Was Cupid A Boy” (Acoustic Desaster Records 2014, CD/LP/Download) 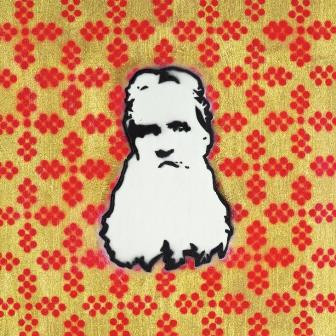 Get On Jolly are a Swiss 7 piece band, three of whose members are in Ad’Absurdum who also have a new album on the Acoustic Desaster label. The band employ a variety of instrumentation including guitar, bass, drums, piano, harmonium, organ, Rhodes, synthesizer, electronics, xylophone, and vocals. All the lyrics on Why Was Cupid A Boy are by the poet William Blake.

The set opens with the 11 minute Land Of Dreams, which starts off drudgingly stoned, but soon drifts off into droning, pulsating space. A lightly tinkling piano melody join in, soon followed by pensive, lilting vocals. The combination of atmospheric drones, piano and vocals are dreamily haunting, yet also feel like a mesmerizing Psychedelic lullaby. This quality is only enhanced by spacey effects and eventual descent into pure cosmic drone and angelic aura that leads us to the finale. Why Was Cupid A Boy is a wistfully dreamy acoustic song, nicely embellished by harmonium melody and bells. The Smile is a fuller band song with somber Rhodes leading the way. Plus we now we have a female singer, giving the music a kind of drugged Marissa Nadler feel. The Golden Net is next, and after an extended, mournfully atmospheric intro a guitar melody and dual male/female vocals open the song segment. I like the densely fuzzed wall of sound guitars, creating an Acid-Folk feel that incorporates traditional elements. But then the song portion ends and a pitch black cinematic mood building segment begins, dominated by acid-drone guitars and sparse percussion, floating gently but dangerously to the finale and transitioning smoothly into The Grey Monk, which for Get On Jolly is fairly uplifting and soulful, though still dreamily spacey. Finally, Introduction (Songs of Innocence) closes the set on an optimistic note, continuing the spirited mood but also morphing into hypnotic drone.

In summary, this might be one of most melancholy albums I’ve heard this year. Get On Jolly excel at creating a sense of Psychedelic despair, though it all feels like one big lysergic lullaby and something that can only happen in a dream. I love the vocals, both male and female, and the overall musical feel is a unique blend of Pagan, Wryd and whatever other brand of Folk-Psych you can imagine. Ultimately Get On Jolly just sound like themselves.