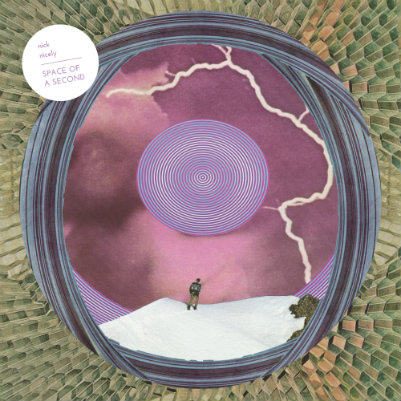 Nick Nicely is one of those Pop-Psych craftsmen who has yet to get his due, despite brushes with major labels and producers. His song Hilly Fields was released as a single in 1982 and is one of those instantly infectious tunes that immediately brings to mind The Beatles circa Magical Mystery Tour or XTC at their very best. I first became aware of Nick in 2012 when Hilly Fields was reissued in original and revisited forms as a Fruits de Mer Records single, and later that year with the song Rosemary’s Eyes on Fruits de Mer’s The League Of Psychedelic Gentlemen compilation.

In 2003, Tenth Planet Records released Nick’s debut album, Psychotropia, which collected recordings from 1978-2004, and in 2011, Burger Records released Lysergia, which I believe might have been cassette only. Interestingly, Lysergia isn’t mentioned in the promo sheet for Nick’s latest album, Space Of A Second, though most of the song titles are common to both albums.

The songs on Space Of A Second take Pop-Psych into deeply cosmic and surreally experimental territory, as if the spirits of Magical Mystery Tour, Revolution 9, Syd-era Floyd, and the most wigged out Krautrock all congealed to create melodically hook-laden songs. Tunes like Headwind Aheadwind take Pop-Psych into space, being a driving rocker that’s loaded with an infectious melody and wrapped in a hauntingly cosmic Pop-Psych meets Space-Prog wrapper. Rosemarys Eyes is here from the Fruits de Mer League Of Psychedelic Gentlemen comp, and it’s a steady paced rocker with propulsive drumming, acoustic and electric guitars, and bubbling alien keys that really make the song. Wrottersley Road is an oddly alluring blend of noise-drone and dreamy Prog-Psych, but within a larger melodic Pop-Psych song context.

It’s the banquet of effects and sense of spaced out Psychedelic surrealism that slingshots along with, as well as morphs and blends with the songs that I find so captivating. It was interesting to read the Shindig magazine review of the album which warned that fans of Hilly Fields “will be disappointed by Nicely’s current penchant for avant-garde, overindulgent electronics” and “way too many superfluous noises drowning out the actual song”. While I do feel that the sound quality is a bit too cavernous and would have benefitted from more clarity in the production and mix, I disagree that the effects drown out the song. This album strikes me as being about far more than just the core song. There’s a lot happening on these songs which begs an attentive ear and rewards the listener with new discoveries upon each new spin. Psychedelia is HOT these days and there are a lot of youngsters like Temples and a zillion other bands I could name that are doing a damn good job of it. I for one am starving for a little extra oomph and adventure in my Psych, and Nicely stands apart with his brand of freak flag fluttering, cosmic experimentalism enhanced song-craft. (Though I do think he can stop re-recording Hilly Fields.)