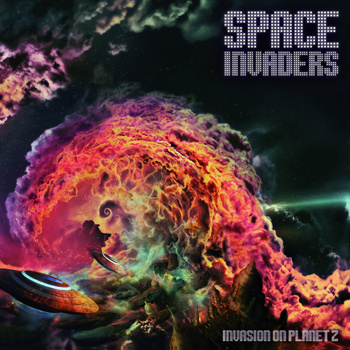 Space Invaders are a German improvisational quintet who formed in 2010 when they met and jammed at the Burg-Herzberg Festival. Consisting of Dirk Bittner on guitar and percussion, Dirk Jan Muller on synthesizer (both Dirks are from Electric Orange), Tipi Mike on guitar and talkbox, Paul Pott on bass, and Dennis Gockel on drums, the band have done sessions with Damo Suzuki, Mani Neumeier of Guru Guru, and, more recently, Nik Turner.

Their first album, Invasion On Planet Z, documents the band’s debut gig and consists of four jams in the 17-24 minute range. Invasion is all about cosmic mood and atmosphere. The drums maintain a slow but steady pace as the dual guitars trip along, playing gliss, space-bluesy, melodic Psychedelic and efx’d licks. As the music develops the vibe gets increasingly volcanic and darkly spaced out, creating a sense of impending interstellar eruption. I like the exploratory guitars and the way they create efx’d soundscapes but also rip off a variety of melodic solos and trippy licks. The explosion never comes, but instead winds down with floating space keys and Blues guitar which melts smoothly into the next track, Surrender, and this is where things start to liven up. The rhythm section picks up the pace, cosmic keys wash over in waves, and the guitars continue their Blues jam, bringing to mind a more spaced out take on Ash Ra Tempel during their more freeform jamming moments. Though it’s all got a funky and somewhat tribal quality, mood and atmosphere still seem to be the main goal, creating a sense of head boppin’ mind massage. But after the 10 minute mark the band veer into a heavier rocking jam with a cool combination of ripping rock solos amidst an atmosphere of grooving yet acidic Psychedelic-Funk.

Invasion and Surrender unfold like one piece but the band start fresh with Leaving the Ruins, which quickly settles into a steady rocking Psychedelic-Jazz jam, peppered with spacey synth flourishes. The groove is once again funky but far more energetic and intense as the music whips itself into a spaced out Psychedelic frenzy. The guitars work really well together. My favorite part is where one is soloing wildly while the other is bashing out cosmic wah’d chords. A killer 24 minutes of early 70s Kosmiche and, for a more contemporary analogy, like a blend of Space Debris and Oresund Space Collective. Finally, we’ve got Laboratory in Space which is like a blend of everything that came before, being variously Psychedelic-Jazz rocking, intensely Stoner-Drone jamming, and deep space meditative. A tasty cool grooving and dreamy jam. 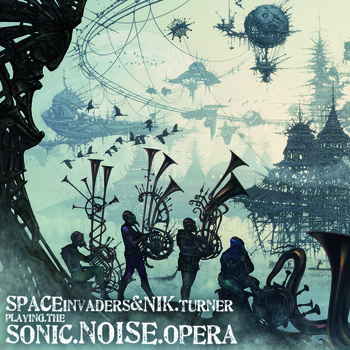 The second Space Invaders album is co-credited with Nik Turner and was recorded live at the 2013 Psychedelic Network Festival in Wurzburg, Germany. The set opens with two nods to Nik, starting with Sonic Attack, which is always a fun piece for musicians to create the freakiest effects they can conjure up. This is followed by the quirkily punky Inner City Unit song, Space Invaders. And it’s all improv from there.

Spicy Spiders is a lightly grooving Space Rock magic carpet ride led by Nik’s jamming sax and flute, tasteful guitar solos, and it’s all surrounded by a heavenly aura of synth magic. It winds down on an ambient wave of soundscapes, flute, gliss guitar, and percussion, and then the sax and an ambient drone wave lead into the next jam, Drum ‘n’ Space. The drums and sax quicken the pace, paralleled by a hypnotic drone, and soon we’re rocking hard like a saxophone led Ozric Tentacles. This is damn good and about the tightest and most composed feel I’ve heard yet on either of these albums. Stardust Part 1 is next and kicks off with fluttering flute and a throb rocking bass groove which leads to a hypnotic yet grooving and totally spaced out stoned vibe. These guys are good at rocking out while maintaining a sense of floating gently through space. Once again we’ve got really cool dual guitars, mind massage drone waves, doomy bass riffage, a comfortably propulsive rhythm, and Nik’s sailing melodic flute. Then in the second half the band gets increasingly more aggressive, culminating in an Acid-Stoner-Space furor. Can You? starts off with space ambience, drones, alien electronics, and a spoken word narrative I couldn’t make out. And once the band start to groove it has a Hawkwind feel at first and then goes into another of those Ozrics with a sax player styled Space Rock jams. But don’t get too hung up on the Ozric analogy. These guys cover a lot of ground, incorporating Jazz, Prog and interesting ethnic percussion elements. The music winds down with another transitional space ambient, noodling guitar and swingin’ sax segment, leading into the final jam, the 15+ minute Stardust Part 2. This is a potent brand of symphonic Space Rock, thundering along like warriors marching into galactic battle, and gradually picking up the pace to where they’re rocking hard and fast. This is a smoker and probably my favorite track from both albums.

In summary, I think these albums make a good pair. Planet Z is the one for loooong stretched out freeform jams, and the Nik set features the more tightly wound side of the band. I’ll look forward to whatever side of Space Invaders the band reveal next.