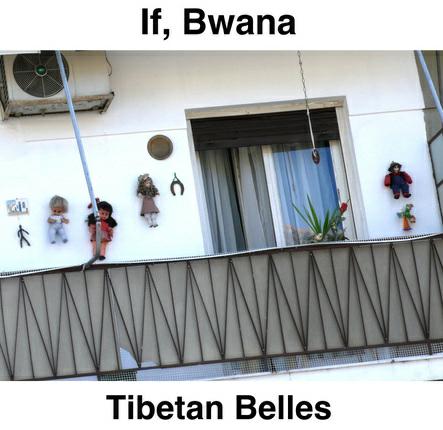 If, Bwana is the long lived project of Al Margolis, revered by many homemade musicians as the godfather of American cassette culture. Margolis’ Sound of Pig label (which later morphed into Pogus Productions) was a showcase for many experimental music artists throughout the 1980s-90s.

Tibetan Belles consists of 10 tracks, some recorded in the studio and some in various live performances. The 10 minute title track is a powerful opener, being a sparse yet compelling solo bells performance. The highlights are the extended fades after the bells are struck, as they ring, oscillate, and impose a hypnotically commanding presence in the listener’s brain. With the headphones on at low volume, the ringing of these bells are a simultaneously hypnotic and unsettling experience, being beautifully and effectively recorded. Margolis is equally spare with a Casio sound exploration, recalling an electronic experimentation from the 60s as he accentuates various bleeps, blurps and sundry sci-fi sounds. Ditto for the Roland Micro Composer piece which is like an old time electronic music demonstration, creating a grab bag of retro 50s movie soundtrack effects and alien sine waves which worked on my brain much as the bells did. This theme continues on the guitar synth and Moog Rogue tracks. I never would have guessed the instrument was a guitar synth, making the whirling, whistling and howling sci-fi sounds all the more entrancing, and conjuring up some Louis and Bebe Barron electronic master class, or late 60s World’s Fair World Of Tomorrow exhibit on the Rogue track. Margolis also manipulates conventional instruments, including noisily caressing violin and some interesting spluttering trumpet sounds.

What makes Tibetan Belles such a provocative listen is the recording quality, which is excellent and puts singular focus on the sounds, making the experience feel like being the sole audience member during a sensory deprivation tank performance. Even the Lodge track, which is clearly live, sounds good.

To purchase the CDR version of Tibetan Belles visit the information packed Haltapes web site at: http://www.haltapes.com
Stream and download at the Haltapes Bandcamp site at: http://halmcgee.bandcamp.com