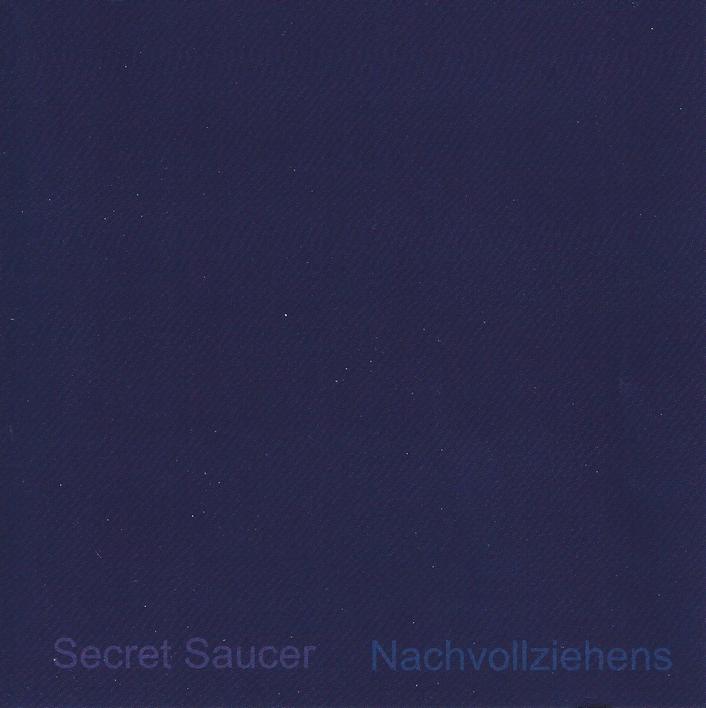 Secret Saucer have at various times included members of Quarkspace, Architectural Metaphor, Star Nation, Sun Machine and others, being a collective of musicians from some of best Space Rock bands in the northeastern U.S. Nachvollziehens is their latest album and compiles remixed tracks from earlier albums, live in the studio tracks, and a previously unreleased song.

Evade is the unreleased tune and is a smokin’ hot Space Rock ‘n Roller with punky guitar that brings to mind early Farflung. But it’s also got tense, high pitched keys that give the music a sci-fi TV theme feel. Mix in some President Obama and newscast samples and we’ve got us a shit kickin’ Politico Space Rock song. A Sublime Metaphor is one of the live in the studio tracks, being a steady paced jam with a Psychedelic soulful feel, and led by wailing, melodic, trippy angst guitar combined with lots of threatening alien electronic efx action. Liftoff is the other live tune and another song that has a catchy soundtrack styled melody, along with Prog keys, killer rocking guitar and an onslaught of effects. Lunar Pull is a remix of a track from the Four On The Floor album, with all new guitar from Steve Bemand, whose resume includes a brief stint with Hawkwind, Technicians Of Spaceship Hawkwind, The Starfighters, The Glissando Guitar Orchestra, and most recently The Timelords, who released the excellent Convergence album earlier this year. The keys inject a powerful early 80s Neo-Prog feel, but the rhythm guitar is all Hawkwind, though Bemand switches to melodic Prog mode for the beautifully tasty solo. And I think the heavily efx’d robot vocals provide a nice contrast.

The other four remix tracks include Steve Taylor, Greg Kozlowski from Architectural Metaphor, and Paul Williams and Jay Swanson from Quarkspace in the lineup. I’ve always loved Jay’s keyboards. I’d know his playing anywhere. On Light Years Away he provides the flowing, melodic Quarkspace feel and plays pied piper to the legion of electronics that scramble around him. We’ve also got dual guitars, one tripping out in space and the other ripping off killer rocking solos. I love the combination of meditative stream and genuine edge of your seat tension. Desert of Existence has a cosmically soaring Pink Floyd infused Architectural Metaphor feel. Greg’s guitar licks are like some kind of space shaman on Mind Mechanics, which sounds cool along with the frantically off-kilter synth pattern that soon eases into Jay’s jamming piano. Tension never felt so good as we groove along steadily in space. Finally, the 15+ minute Atom Smasher is fully double the length of the original version on the Element 115 album. It’s all atmosphere and journey through the cosmic countryside, with a strange but alluring combination of spaced out Pink Floyd Wish You Were Here drift and miscellaneous sounds, like machines, birds, and lots of carefully incorporated effects. Then after the 9 minute mark the band launch into a steady but power rocking jam that has a strong Quarkspace feel, embellished with ripping guitar solos and wildly swarming electronics.

In summary, Nachvollziehens is a potent set of (mostly) instrumental Space Rock. There’s enough that’s different here for those with the entire catalog to want to pick it up, and is the ideal place to start for newcomers.

Purchase the Nachvollziehens CD or digital version at: http://www.cdbaby.com/cd/secretsaucer4
Other Secret Saucer albums are available there as well.