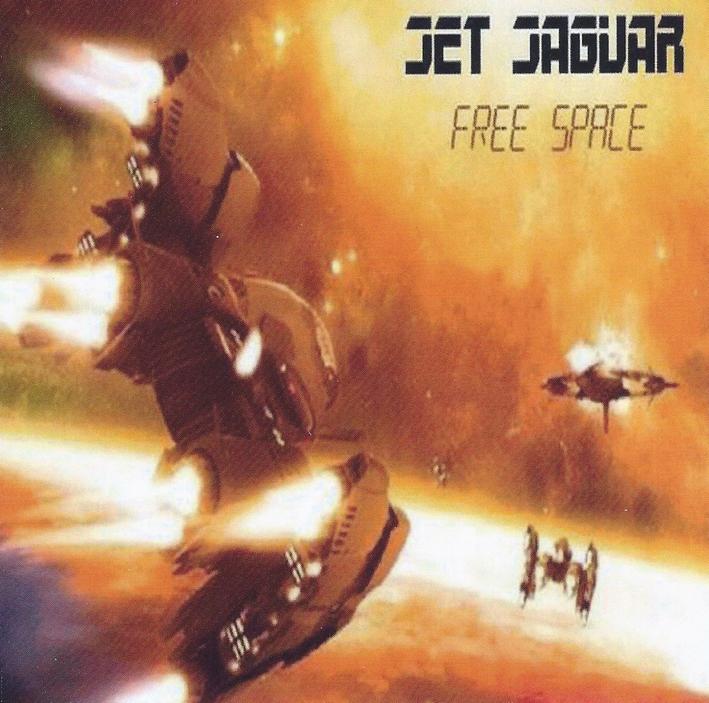 This is third edition of Jet Jaguar’s Free Space: The original 12 song set was released by Aktivator Records in 2002, followed by a 14 song remastered edition after the original 100 sold out, and now all these years later a newly remastered set with a slightly different setlist of 12 songs and vastly superior cover art.

I’ve described Jet Jaguar as the ultimate marriage of Hawkwind and Chrome, though I’ll add the tongue in cheek alien fun of Zolar X and the looming spirit of Robert Calvert. This is a fasten your seatbelts and hold on for dear life brand of Space Rock; the kind of sci-fi Rock ‘n Roll that instills a sense that the fate of the entire universe hangs in the balance and you couldn’t give a shit because the space station party is raging and nothing else seems to matter.

The songs are super fun, with a bouncy, chug-a-lug Punk-ish Rock ‘n Roll rhythmic pulse, typically clocking in at a punchy and to the point 3-4+ minute range. Yes, you can dance to it! The music is characterized by searing Helios Creed styled corrosion phasing between channels, which can be disorienting when listening with headphones. We’ve got relentlessly swirling and bubbling space synths, often augmented by soaring, melodic synths that border between Prog and 80s New Wave. The song titles speak volumes: Brain Stun, Autopilot, She’s An Alien, Beam Me To Mars, Shockwave Rider… you get the idea.

There are some moments of easing back from the assault. I like the efx’d voice narration and cosmic sci-fi ambience of The Emissary, which serves as an intro to the still rocking but more lightly paced I.C.U., with its cosmic angelic synths that give the music a Punky Hawkwind circa Palace Springs feel, mixed with more of that Prog meets 80s New Wave vibe. The Scanner, a song that wasn’t on either of the previous editions of Free Space, is like a sci-fi robotic take on 80s New Wave. And, finally, Shades Of Noir Descending is a dark, ambient, Space-Goth meets Psychedelic Doom-Drone tune that closes the set.

In summary, if you like heavy duty, no quarter, sci-fi Space Rock ‘n Roll then you are absolutely guaranteed to love Jet Jaguar. Did I say this is fun stuff? This reissue is a treat because the album hasn’t been available for a while. AND, best of all, the first new Jet Jaguar music in some years is on the way, hopefully in the coming months. Stay tuned…

The CD and download of Free Space and other Jet Jaguar albums are available from CDBaby: http://www.cdbaby.com/cd/jetjaguar1
It should also be available at Amazon and Forced Exposure