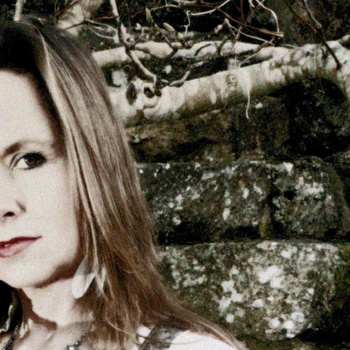 Crystal Jacqueline and cohort Icarus Peel have been on a roll since the debut Honey Pot album in 2012, chocking up a bevy of beautifully composed, executed and produced Psych/Folk/Pop/Prog songs and killer covers of both classic and obscure tunes. If you’ve read my past reviews you’ll know what a great job they do with the covers. But Peel has been flying high on my radar so I’m pleased to see a higher ratio of his originals on the latest Crystal Jacqueline outing – Rainflower.

The album opens with the Lullingly intense, Prog steeped, Pop-Psych song Siren, which takes a lighter bouncy turn near the end. The first part of the 10 minute Winter Deep / Dress Of White Lace is co-written by Peel and Mordecai Smyth, being a tenderly hypnotic, ethereally mind-bending Folk-Psych song with beautiful vocals, leading into a spaced out lysergic sound exploration passage before launching into the heavenly space-orchestral Dress Of White Lace. I floated along with the acoustic/electric guitar, organ, percussion and flute blend on Water Hyacinth. Daisy Chains is a heavy rocking blast of Psychedelic Pop. Mary Waiting consists of dreamily orchestrated Folk-Pop-Psych and lots of trippy jamming. I swooned to the darkly surreal and hauntingly seductive Strange Bloom, which is like a 60s Psychedelic take on the Torch song. The gently uplifting Rainflower is a gem. And Again… Dragonfly starts off with sparse, atmospheric instrumentation, the spotlight being on the vocals, before soaring into the cosmos for a blistering Psychedelic anthem finale.

Rounding out the set are two cover tunes: Jacqueline goes down ‘n dirty Psych-Blues rocking and injects freaked out efx into Status Quo’s In my Chair. And the spirit of the original is retained on Roger Waters’ Grantchester Meadows, though it’s imbued with a cool combination of acoustic drift and atmospheric intensity.

The production, also by Peel is stellar, giving the music an expansive and majestic back-in-the-day but with modern technology feel. This is like the best of Psychedelically orchestrated, craftily arranged and freakily efx’d 60s songs, but without feeling overly retro. And the vocals… Jacqueline is a wonderful singer but the way the harmonies and multi-tracking is handled brings a tear to the eye.

The album will be released on May 18th in CD and LP editions, both limited to 250 each, and of course there will be a download available as well.