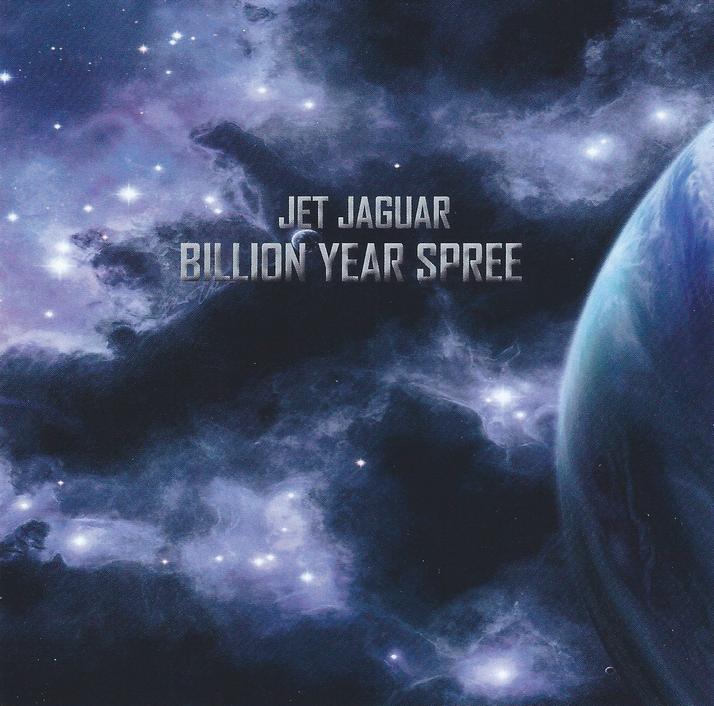 Hot on the heels of the reissue of 2002’s Free Space album, Jet Jaguar give new life to 2004’s Billion Year Spree, all of which is leading up to what for me is the much anticipated first NEW set of Jet Jaguar songs in some years.

The band blast off the launch pad with Nonstop, which epitomizes Jet Jaguar’s brand of phasers on kill, Warp 6, holy shit we’re all gonna die Space Rock ‘n’ Roll. The songs are mostly short and pack a firm boot to the gut, combining high intensity and dangerously corrosive Space Rock with a good time dance party Rock ‘n’ Roll vibe. Other highlights include Future Martyr On Supersonic Waves, with its wildly weaving phased effects, punky rhythmic pulse, and eerie spaced out keys. I really dig the swirling synths and electronics on the punked out Hawkwind infused Turbulent Mirrors. Wastelands of Canaveral recalls the spirit of Hawkwind’s Space Ritual with its sci-fi poetry and space effects blend. Marooned is a dreamy instrumental that tempers the storm. And on we go. The original Billion Year Spree had 15 songs and this reissue has 13. But it also has two that weren’t on the original. Chrononaut is like the synths and effects intro to a global meltdown. And Jet Jaguar’s powerhouse cover of Hawkwind’s Lord of Light originally appeared on the Daze of the Underground Hawkwind tribute, which goes nicely with the caustic Space-Punk cover of Robert Calvert’s Aerospace Age Inferno.

In summary, if you like relentlessly rocking, balls to the walls sci-fi Space Punk ‘n’ Roll, then Jet Jaguar are about the most fun you could hope to have. Highest recommendation!

The CD and download of Billion Year Spree and other Jet Jaguar albums are available from CDBaby: http://www.cdbaby.com/cd/jetjaguar12
It should also be available at Amazon and Forced Exposure