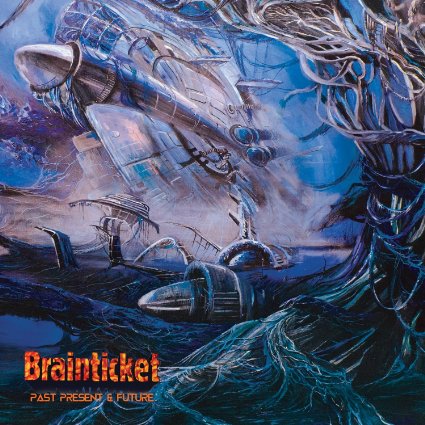 It’s been 15 years since the last new Brainticket album – Alchemic Universe, released in 2000. Fast forward to 2011 and Brainticket founder and ship commander Joel Vandroogenbroeck teamed up with members of Farflung and Pressurehed, plus Abby Travis on vocals to join the Cleopatra Records sponsored Space Rock Invasion tour that brought Brainticket, Nektar and a solo acoustic Huw Lloyd-Langton to the U.S. I caught the tour in Cleveland I am not exaggerating when I say that Joel and company put on one of the best live performances I have ever seen (CLICK HERE for some YouTube videos). I also had the opportunity to interview Joel, who indicated that he was hoping all the activity and visibility would result in an album of new material.

It took almost four years but it’s finally arrived. Vandroogenbroeck isn’t joined by the musicians who accompanied him on tour in 2011, but instead we have the excellent Hedersleben, the same band who backed Nik Turner on this past year’s U.S. tour: Nicky Garratt on guitar, Bryce Shelton on bass, Jason Willer on drums, Kyrsten Bean on guitar and vocals, and Kephera Moon on keyboards and vocals. Maybe this is Cleopatra Records new Space Rock house band? And of course we have Joel on organ, piano, synthesizers, sitar and flute.

Past, Present & Future includes 9 tracks and clocks in at 75 minutes of music. The album opens with the two part, 30 minute Dancing On A Volcano. The band lay down a funky rocking groove over which either Bean or Moon take on the Carole Muriel role reciting otherworldly spoken word narratives, which alternate with spaced out Prog-Kosmiche keys and bubbling synth effects. Near the end of part one we descend into a darkly contemplative passage with classic Prog and spacey keys, a beautiful flowing flute solo and trippy guitar. It’s like a combination of early 70s Brainticket, Meddle era Pink Floyd and even a wee bit of Genesis. Part two starts off with freeform jamming and sound exploration before launching into a reprise of the Funk-Rock that opened the set. But this time we’re in more overtly Prog infused Space Rock territory, with head boppin’ and hip shakin’ grooves that leave plenty of room for jamming exploration by the individual musicians. About halfway through we transition to a dreamily introspective theme, with flowing soundscape waves, heavenly keys, lulling atmospherics, and an Ambient-Jazz vibe. And when the flute takes the melodic lead it feels like the deep space Jazz soundtrack to some 60s film. Absolutely fantastic. If these 30 minutes were the entire album I’d be satisfied. But there’s more…

Joel’s magic sitar leads the way on the Psychedelic Space-Raga rocking Reality of Dreams. Proto Alchemy is a majestically plodding Space-Prog instrumental with a cool combination of doomy bassline and Jazz jamming keys. Riding the Comet starts off like the perfect theme song to an old sci-fi TV show, before morphing into a good time swinging slab of cosmic dancefloor fun. East Moon consists of grandiose, concert piano led symphonic rock. Singularity alternates between high intensity Space-Prog with alien efx’d spoken word and hypnotically dreamy melodic segments. Egyptian Gods Of The Night Sky has a Book of the Dead type narrative theme, with music that is both Psychedelically dreamy and hauntingly dissonant, making for an alluring blend of Kosmiche and Avant-Prog. Finally, Brainticket Blues is precisely that… sultry Blues with a jazzy cosmic edge.

In summary, Brainticket 2015 mines territory that will be familiar to fans of the 70s albums, but have not contented themselves with a mere retro experience. Vandroogenbroeck has collaborated with an ace ensemble of musicians to create music that draws on the past but is heavily informed by many of years of experience since. I think its damn good.

For more information visit the Cleopatra Records web site at: http://cleorecs.com
The CD is also available from Amazon.com 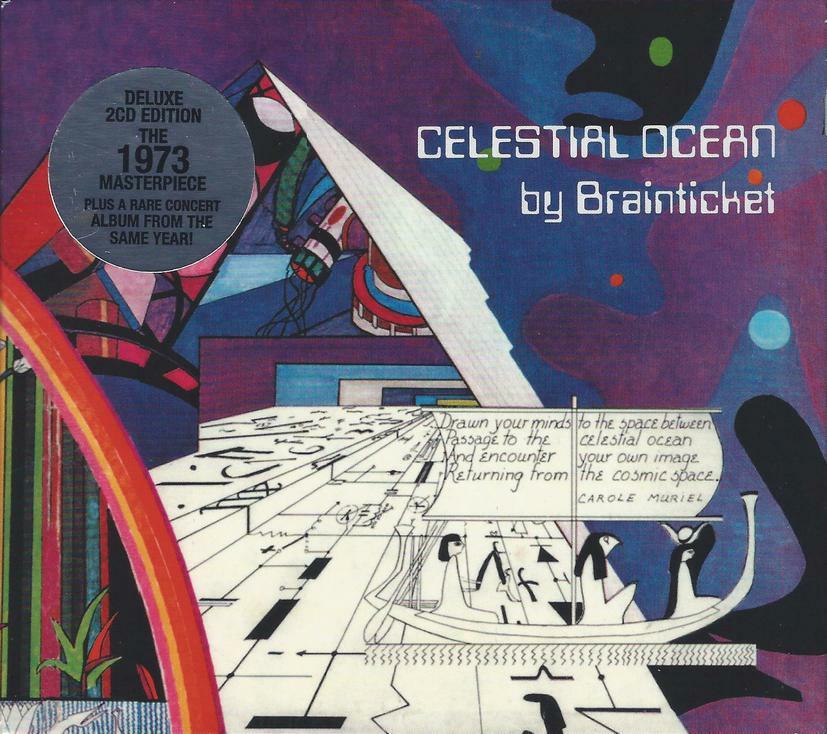 The first three Brainticket albums – Cottonwoodhill (1971), Psychonaut (1972), and Celestial Ocean (1973) – are classics of early 70s experimental Progressive/Psychedelic/Kosmiche music. Headed up by Joel Vandroogenbroeck, a Belgian based in Switzerland, Brainticket have sometimes been lumped in with the Krautrock bands. Though this is incorrect from a nationality standpoint, Brainticket did share in common with the pioneering Germans of the era a distinctive identity, creating music that was simultaneously experimental and accessible… introspective and transcendent.

Cleopatra Records first reissued these albums on CD some years ago, and in 2011 released an outstanding box set that included not only the original trio but also the 1971 Drum Circus album that Vandroogenbroeck participated in; Biomechanoid from 1980, which was inspired by the paintings of H.R. Giger and was one of the recordings Vandroogenbroeck made for the Coloursound Library label; tracks from the 1980s Brainticket albums Voyage and Adventure; a live Brainticket concert from 1973; and various tracks from pre-Brainticket bands Vandroogenbroeck was in, some going back as far as 1959.

I’ll assume these keep selling, which is fantastic, because Cleopatra has reissued Celestial Ocean again, this time in a 2-CD package with the 1973 live in Rome set as a bonus disc. The live set is a treat, with tracks from Celestial Ocean interspersed with improvisational bits. The sound is decent bootleg quality and very listenable, all the more so given the dearth of known live Brainticket recordings from that era.

Based on the Egyptian Book of the Dead, Celestial Ocean is just as much an adventure in sound as it is a set of experimental Prog-Psych. Egyptian Kings utilizes flute, organ and other keyboards, various sounds and effects, plus male and female narration to create a Psychedelically soaring blend of Progressive Rock, avant chamber ensemble and Jazz. This melts seamlessly into the lushly lysergic and tripped out string and sitar parade that is Jardins, which includes more cosmic poetry from American vocalist Carole Muriel. The brief but intense Rainbow and Era of Technology are chaotically spaced out combinations of alien effects and poetry, like a Beat generation take on Hawkind’s Space Ritual. These serve as a lead in to the tribal, poetic, and wildly space electronic To Another Universe, which is like a Teutonic Kosmiche meeting of Sun Ra and Soft Machine. The Space Between is a quirkily grooving and strangely meditative combination of tribalism and floating space electronica, with narration in English and French. The aptly titled Cosmic Wind comes across like a Psychedelic New Age mantra, with flowing strings and pied piper flutes amidst an aura of deep space atmospherics. And Visions is like a celestial piano concerto and reprise of earlier themes that brings the set to a close. ESSENTIAL listening for fans of the early 70s Prog/Kosmiche pioneers!

For more information visit the Cleopatra Records web site at: http://cleorecs.com
The CD is also available from Amazon.com