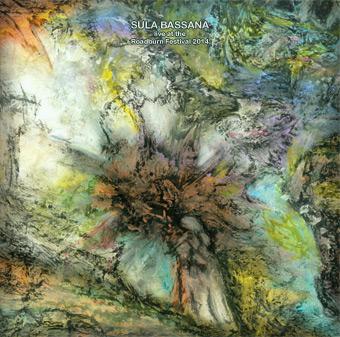 Dave Schmidt rarely performs live as Sula Bassana but for last year’s Roadburn Festival he assembled a quartet that consisted of the Electric Moon trio (Dave/Sula on guitar, synths FX; Komet Lulu on bass, FX and Marcus Schnitzler on drums), plus Rainer Neeff from Zone Six and The Pancakes on guitar and FX. In fact, Sula and Lulu also played at the fest in a live version of the Papir meets Electric Moon lineup that released The Papermoon Sessions album in 2013 and their performance is yet another new album on Sulatron. (CLICK HERE for my review)

The four tracks on the album include the complete concert. Rainstorm is a chunky grooving rocker that gets increasingly fuzz dense and psychedelically demonic. I love the dual guitar action bashing out acid-fuzz chords, caustically cranium burning licks and freakout effects while Lulu and Marcus hold down the plodding yet determined rhythmic pulse. The only thing tempering the aggression comes in the form of a pleasant synth melody near the end, which is soon overpowered by the guitars for a volcanic acid-doom finale. Killer jamming spaced out Psychedelia. D-Light gives the listener a little break, opening with freeform trippy guitar, electronic effects and a sailing synth melody. The two guitars explore, being both melodic and atmospheric as acidic tension slowly builds. A faster rocking pace gradually picks up, feeling like an explosion could come at any moment, yet despite the tension and acidic aggression the band somehow maintain a spaced out flowing feel throughout. At 18 minutes, Dark Days is twice the length of the track from the 2012 album of the same name. I love how it alternates between heavy duty Psychedelic acid jam and space symphonic Prog-Psych, the latter bits consisting of anthem-like orchestration that sounds really cool alongside the molten lava guitars and pounding rhythmic pulse. Another killer jam that rocks hard in acid drenched and Prog sprinkled space. Finally, Alienfuzz is a relatively short but high energy Space Rocker with a Farflung edge that closes the set.

For freeform jamming Space-Psych Rock this is monstrous stuff. A great companion to this album would be the Papir meets Electric Moon live at Roadburn set, also released by Sulatron.

Note that the CD is available at the time of this posting and the vinyl is scheduled for May 8th.