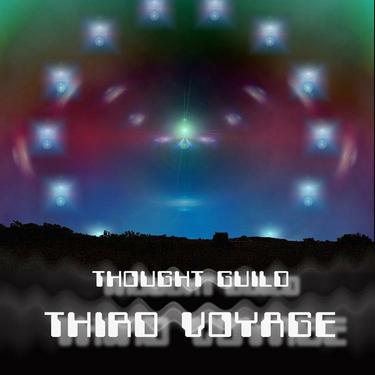 Thought Guild was the duo of Gregory Kyryluk and Christopher Cameron, the latter of whom sadly passed away in 2011. Third Voyage is the final chapter in a trilogy of albums originally intended for release in 2006 but not unleashed until 2012, and then only in a limited edition of 50 CDs. Kyryluk has finally made the album more widely available in both CD and download formats.

The Ebbing Universe opens the set with floating space electronica that melds Berlin school and New Age with a symphonic Progressive Rock sensibility and a spellbinding song-like quality. I love the tinkling sequenced and cosmic whale song melodies on Iridescent Resonance that contrast with one another but glide along in tandem, soon joined by a classic Prog keyboard melody, and all surrounded by a heavenly orchestral atmospheric aura. Last Train To Lyon is a seamless synthesis of multiple elements, sounding in part like a deep space take on 80s synth-pop, but also having an accessible Prog-light feel and cosmic noir quality, plus lots of fun freaky alien effects. The full blown Space-Prog rocking Retropolis has a cinematic edge that could have put these guys in the sci-fi soundtrack business. And speaking of soundtracks, Moon Blossom Meditation has a Goblin/Suspiria character, but is angelic and mystical rather than horror driven. VCO vs. DCO is another slab of deep space Prog with a classic sequenced Tangerine Dream drive. Titanium Ashram is a soundscapes, ambience and effects mash with a playful rhythmic patter that’s like a light skip through the outer edges of the atmosphere. Celestial Glossolalia is pure heart wrenching space symphony. And Ki is a “Bonus Live Improv” from 2004 that was added for this reissue and sounds in part like something from a live Klaus Schulze performance. Overall a very enjoyable set of Space-Prog and floating electronic driven space excursions.