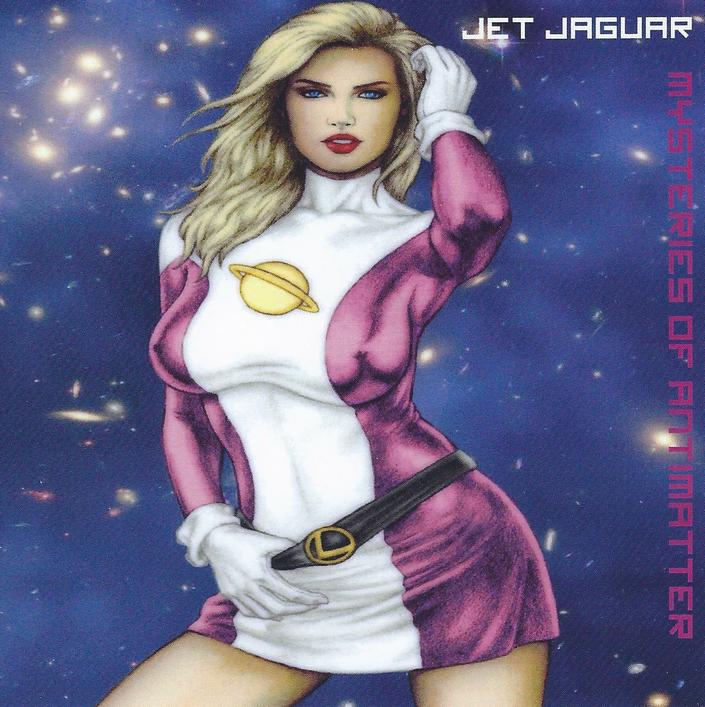 The last new Jet Jaguar music was heard on the 2008 split with Guild Navigators, so it’s been a while. Recent months have seen reissues of the earlier Free Space and Billion Year Spree albums, which may very well have been new finds for many listeners. But for those of us who have been following the band, the 14 new songs on the just released Mysteries Of Antimatter is cause for Space Rock celebration.

There are no long jams here. Jet Jaguar’s songs are typically in the 2-4 minute range, blasting full bore off the launching pad and running ramshod over the listener for the duration. The music is characterized by blistering Helios Creed inspired guitar that weaves a path of phased, corrosive destruction, hyper-kinetic drumming and meteor shower electronic effects. The keyboards range from eerie old time sci-soundtrack to classic Prog. Some songs feature quirkily metered Space-Punk, like some kind of Chrome meets Devo summit. Others are like a speed freak Space Rock ‘n’ Roll party at the Star Wars cantina. We’ve got Motorik Acid-Metal, Space-Industrial with a Louis and Bebe Barron backdrop, scorchingly steroidal Hard Rock, and lots of cosmic Goth influences. This is the kind of Space Rock that kicks the ever luvin’ shit out of you but is fun fun FUN! And no Jet Jaguar album would be complete without at least one cover, and here we’ve got a totally evil, steamroller freakout rendition of Helios Creed’s Superior Catholic Finger. The song titles and themes scream sci-fi: Planet Of The Vampires, Rocket Boy Meets Saturn Girl, The Ghost Of Buck Rogers, Workin’ In The Asteroid Mines, Destroy All Planets… you get the idea.

In summary, this could very well be the Space-Punk-Rock sci-fi event of the year. Highest recommendation!

The CD and download of Billion Year Spree and other Jet Jaguar albums are available from CDBaby: http://www.cdbaby.com/cd/jetjaguar13
It should also be available at Amazon and Forced Exposure 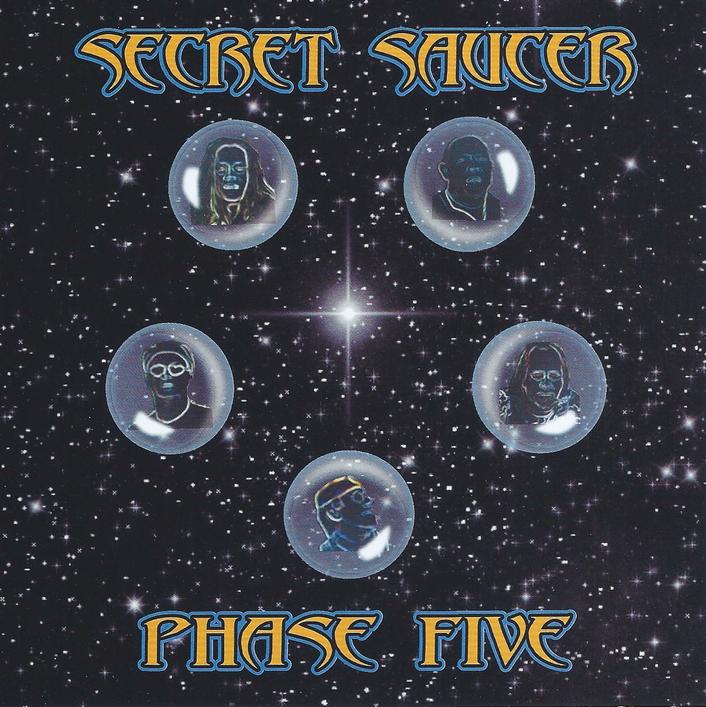 Secret Saucer are a collective of musicians whose origins are rooted in the Strange Daze Space Rock festivals which were held first in western New York and then Ohio from 1997-2001. Their membership has at various times included members of Quarkspace, Architectural Metaphor, Star Nation, Sun Machine and others. Last year’s Nachvollziehens album compiled remixed tracks from earlier albums, live in the studio tracks, and a previously unreleased song, and now Phase Five offers up the first brand new set of Secret Saucer music since 2011’s Four On The Floor.

Secret Saucer have come a long way since the improvisational jams that characterized their first albums, and some of the music on Phase Five took me by surprise. There’s a lot of variety here. After the electro-tribal introductory Blue Star the band blast off with Spin Drift, a good time Space Rock ‘n’ Roller that reminds me of Alan Davey’s Chaos Delight album which paid tribute to sci-fi soundtracks and TV themes. The punchy fuzzed out bass certainly conjures up Alan, the keys scream 60s sci-fi, and it’s got a tasty catchy melody. Great tune. Visible Light starts off sounding like Hawkwind at their most electro-grooving, with guest Tom Brehm contributing some cool fiddle parts. But then the music does a 360 and transitions to a spacey melodic keyboard dominated Prog theme, and later Brehm joins in with some soaring fiddle licks and the freaky synths bring us to an extra-terrestrial finale. The band rock out again on The Alderson Point, which zig zags from intricate instrumental gymnastics that remind me of the Prog band IQ, to heavy rocking Hawkwind, and has some killer guitar from guest John Pack of Spaceseed. This is probably the most compositionally complex song I’ve ever heard from Secret Saucer. We shift to Space-Doom mode for Three Days of Darkness, which is an onslaught of alien effects and ripping guitar leads from guest Steve Bemand, all occurring amidst an aura of stoned cosmic doom. Imagine lava pouring out of a black hole and sludgily oozing through your cranium. Secret Saucer shift gears yet again for the quirkily Motorik yet heavenly Space-Prog vibe of The Quencher, which also has a bit of a Hawkwind D-Rider feel. This bleeds seamlessly into Space Walking, which is dreamy and flowing but with a steady rhythmic pulse and a cool combination of Proggy keyboard melody and spaced out synths. Mr. Natural is an intense sound effects and electro rhythms exploration that reminds me of parts from Hawkwind’s Palace Springs. Then past the halfway mark the music transitions to a jazzy, drifting yet grooving theme with pleasant flute solos from guest Greg Klucher. And the set concludes on a heavy note with Nova Star, a stoned Space Rock dirge with another mighty guitar lead from Steve Bemand.

Well… hot damn! After several spins this past week I have to say that Secret Saucer have outdone themselves with this one. Great compositions, awesome playing from everyone and lots of fun and interesting variety throughout. Recommended!

Lizards Exist are a guitar, bass, keyboards, synths, melloton, and drums instrumental quartet from Croatia who play a spaced out blend of Prog, Jazz and Blues.

Bamija opens with a jazzy bass and drums groove as spacey Bluesy guitar and keyboard leads trip along. After a buildup the band launch into a full blown Space-Jazz-Fusion jam, with the guitar and keys rushing through a variety of intense leads. I like the intermittent rushing oscillation wave and the mellotron that chimes in near the end adds a bit of spacey Prog-Jazz spice. The piece segues seamlessly into Ljetni Hit, another cosmic Blues rocker with some cool saucy and sometimes freaky Blues guitar leads. Add in some brief Rick Wright sounding keys and it takes on a Pink Floyd feel, though Lizards Exist are way more in Space-Jazz-Blues Fusion territory than the Floyd. Later the keys later take on swirling Ozrics gone Prog style that sounds great, and this all leads to a smokin’ organ and manic wah guitar led jam finale. There’s barely a moment before the band slingshot into the next track, simply titled the number 58. The groove and guitar remind me a bit of Hidria Space Folk at first, though Lizards Exist are Prog style turn-on-a-dime zipping all over the place, veering though bursts of blazing rock, Space-Blues and Prog-Jazz-Fusion. There’s a cool Latin tinged organ and guitar section that sounds great, and the intensely bubbling and swirling alien synths and gliss guitar are nice touches indeed. Tightly played and SMOKIN’ hot rocking! Finally, Anunnaki Dance is the 17 minute epic of the set, though really this album has flowed continuously from the start. The music grooves along at a cosmically atmospheric, slowly but steadily flowing pace, exuding a spaced out sassy attitude and featuring lots of great guitar and organ sounds and leads. Then about halfway through the band transition to a freaky effects laden soundscape section that’s part Hawkwind Space Ritual and part alien haunted house. This goes on for a while before the tension starts to build and soon bursts back into a high intensity Space-Prog-Fusion jam.

In summary, these guys can PLAY. I really dig their Space-Prog-Blues-Jazz hybrid, which frequently draws on 70s sounds and styles but doesn’t sound retro. This is a kick ass set of free-wheeling instrumental music.

To stream, download and purchase the CD visit: http://lizardsexist.bandcamp.com