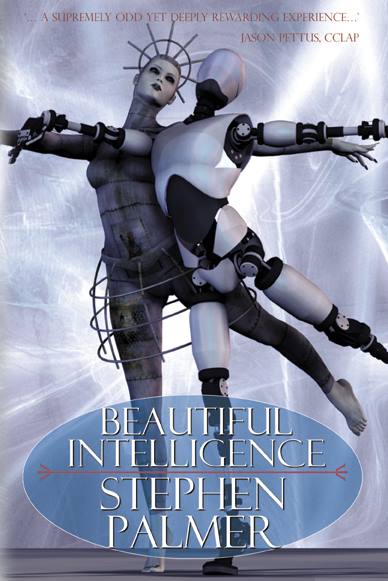 Having read eight previous Stephen Palmer novels the first question that comes to mind with new stories is what kind of world will he create? Palmer has told several tales depicting environmental devastation and last year covered the whole of London in hair. Palmer begins to answer the question in the novel’s opening line reference to a “post-oil world”, leading into what is in ways like and unlike previous books.

Beautiful Intelligence is both philosophical inquiry and action packed thriller. The year is 2092 and a dominant presence is the nexus, a complete model of the real world “created by Pacific Rim programmers to supersede the internet”. Internet social networking had led to an “inexorable erosion of the concept of privacy” (gee, what a surprise), and the nexus is “the internet’s social media taken to its logical extreme”. The nexus knows where everybody is all the time. In fact, for those under the age of 14 without knowledge of a pre-nexus world, the nexus is their life.

The central (human) characters are several research scientists who worked for and have now escaped from Ichikawa laboratories and its controlling head honcho Aritomo Ichikawa. The researchers form two schools of Artificial Intelligence thought that are the core of the book’s food for thought focus. There is the AI team, who create a single artificial intelligence, and the BI team, who create what started out as a connected consciousness of nine, which are then separated to form a social group of individuals.

What does it mean to be human? What is the importance of the solitary experience relative to our experience of one another?

The AI team has Zeug, who is described as humanoid in appearance. The researchers want to create what they call a true artificial intelligence – It has consciousness and communicates through language. “He cannot become conscious unless he speaks, unless he thinks”.

Zeug at first speaks in a way that sounds robotic. Yet we sense his stress as he runs with the team during a chase. Zeug can experience distrust and dislike. He can experience anger and lash out violently, and is even at one point smug at the knowledge of his worth to the group. When the group is attacked, Zeug lashes out. Zeug is even capable of murder.

What is conscious for Zeug? At one point a team member asks if they are building the best computer in the world or conscious artificial intelligence? Can there be consciousness without social interaction? Zeug is the only one of his kind. As Aritomo says, “Zeug’s problem is that he lacks others like himself to interact with”.

The BI team has the nine ‘bis’, which one team member describes as, “Half a metre tall, deep blue and rubbery, it looks like an exotic toy Nippandroid”. Despite the sharp contrast to Zeug’s appearance, these are no toys. The team’s hope is for the bis to become conscious; to have ‘subjective experiences’, emotions and a method of communication. Each of the bis slowly start to take on identities… displaying “nuances of behavior”. And they are clearly learning.

Early on we realize that they are alert, aware, and watching each other. Most important, they are taking on distinct personalities and levels of comprehension. And they are communicating with one another. When the team is threatened by an old man with a rifle, the bis team up wordlessly to lure him into a trap so the security expert can defend everyone. As one researcher describes, “They are growing up. It’s the beginnings of consciousness – and it means they can work together as a team… as a “society”.

But just as Zeug struggles on his own, learning to interact among others presents its own challenges. The bis care for one another after a violent encounter. But they also kill one of their own. Are they like little kids who have learned faster than they can learn morals? One of them eventually reveals the ability to describe the characteristics and abilities of the others, and even makes an argument for wanting to be found by Aritomo.

While immersed in Beautiful Intelligence I also happened to read a review essay of a new book called Machines Of Loving Grace, by New York Times technology reporter John Markoff, which includes a history of AI developments. Markoff tells of early 1960s research at Stanford University where they were attempting to build machines that mimicked human capabilities. Markoff describes how this early research focused on the ability of machines to act like humans.

Whether machines are (merely) copying humans or actually learning is crucial and addressed by Palmer. At one point in Beautiful Intelligence the BI team members are debating the bis humanity as they find themselves treating them like children and ask, are they part human if they mimic us? Similarly, with Zeug, after a violent encounter when the entire AI team is recovering, one member wonders if Zeug really experienced fear, or did a loop of copied emotions cycle through his brain “to then be written on his bioplastic face”.

Markoff also tells of another team at the same Stanford institute who focused on using computer technologies… “employing an array of ever more powerful software tools to organize their activities and create a ‘collective IQ’ that outstripped the capabilities of any single individual”. And he goes on to say that even today there exists two rival engineering communities: One of these communities has relentlessly pursued the automation of the human experience – Artificial Intelligence (AI). The other, human-computer interaction, or Intelligence Augmentation (IA), has concerned itself with ‘man-machine symbiosis’.

Palmer’s tale of the future is not far off from the very real present. It’s both fascinating and frightening how AI is developing and Palmer provides us with much to think about while keeping the entertainment level high, having created a colorful group of characters who contribute to the action as everyone stays on the run from Aritomo and his agents. Palmer has spun one of his most simultaneously fun and often hair raising adventures, but also one that is as ominous and thought provoking as any of his previous novels.

For more information visit the Infinity Plus Books web site at: http://infinityplus.co.uk
Paperback and Kindle editions are available at Amazon