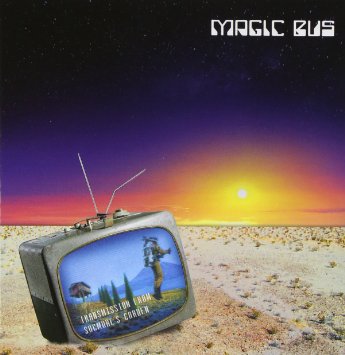 Magic Bus are a UK based dual guitar, bass, keyboards, flute, recorder, drums, vocals sextet who play a 1970s Canterbury and Folk inspired brand of Progressive Rock, with bits of Psychedelia and an Earth/Space lyrical focus.

The 8-song album opens with Sunflower, which is a bouncy, uplifting Sunshine-Pop-Prog dittie with lyrics that traverse flower filled meadows, cosmic little planets and our brains, and includes a beautiful flute solo, rocking guitar and fuzzed out organ. But that’s just the warm up. Magic Bus go into full blown compositionally and thematically complex Prog mode on the Ballad Of Lord Sogmore, which explores Canterbury, Folk, Classic Prog, and Eastern influenced Psychedelic realms. I like the medieval and Jazz infused Cosmic Rays Of Dawn, which features Folk and extra-terrestrial inspired lyrics about living in a tree on bread and tea, but also pointing to Pluto way out in space. Three Days entreats us to climb aboard the bus and then launches into instrumental passages that take us through a beautiful Canterbury and Soft Machine Jazz wonderland, with luscious keys, flutes and guitars, and a tightly grooving rhythmic drive. Jupiter 3am puts a deep space spin on the Prog stylings Magic Bus have adopted. And I guess they would. Because… well… they’re building a “future craft” and planning a new world on red Mars. I love it. And we’ve got a killer instrumental explosion that rocks harder than anything I’ve heard yet on the album, but does so in the gentlest magic carpet floating way. Seven Wonders was my introduction to Magic Bus and the song that left me yearning for more, having heard it recently on the band’s new Fruits de Mer label single (it’s being released right about the time this review is posted, along with a very cool cover of The Byrds’ Eight Miles High). Morning Mantra injects a bit of Grateful Dead West Coast Psych flavor to the Magic Bus Canterbury Folk-Prog sound. And, finally, Earthpod is a Folk/Jazz-Prog and symphonic crooner that pines for a simpler life of space, time and cosmic floating. Don’t we all.

In summary, Magic Bus are a paean to the 70s, though they put a fresh enough spin on those sounds to transcend the retro tag. The compositions and arrangements are pure craftsmanship, with impeccable performances and thematic development that evoke the best of 70s Progressive Rock. Lyrically the band are in a class all their own, with their heads and hearts equally in the most pastoral parts of Earth and the furthest reaches of space. In short, Magic Bus are pure magic. Recommended.