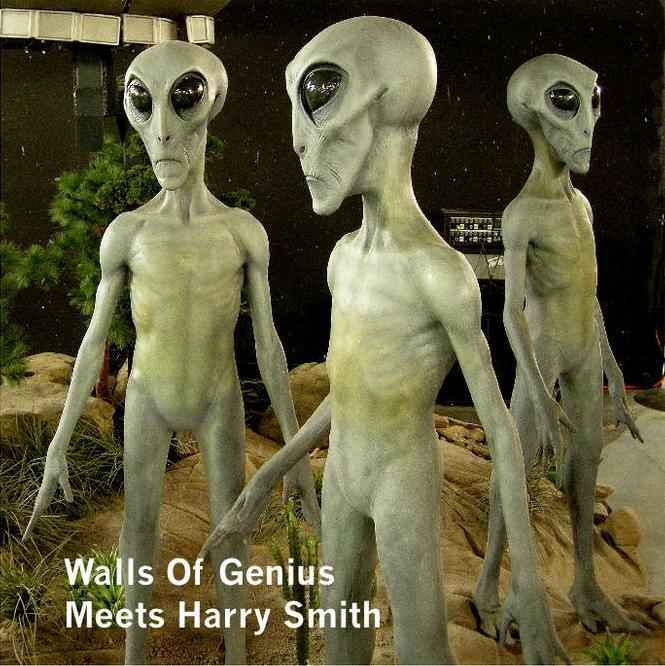 From 1982-86 Walls Of Genius (WOG) were active in the homemade music underground and released numerous cassette albums, and then disbanded until Spring 2014 when they released the Now Not Then reunion album by the original WOG trio of Ed Fowler, Evan Cantor and Little Fyodor. Absence apparently does make the creative heart grow fonder because the guys have been on something of a tear since then.

I’ll quote from the album notes to describe the background to their latest album, Walls Of Genius Meets Harry Smith: This album was originally proposed by Hal McGee of haltapes.com, that Walls of Genius would take on the material from Harry Smith’s Anthology of American Folk Music, originally released in 1952. Smith’s anthology was a collection of folk songs culled from vintage 78-rpm recordings and was highly influential in the folk music boom of the late 50’s and early 60’s. Walls of Genius accepted the challenge!

Peg and Awl is a down on the bayou banjo pickin’ bit of Americana with drawly Leon Redbone type vocals. But offsetting the trad vibe is waves of spaced out soundscapes and drones plus flittering electronic weirdness. The Old Lady & The Devil is a hee-haw’in hoedown barn stomper with trademark whacky WOG vocals and dirty rockin’ guitar and a brief stoned Hendrix solo. John Johanna is a similar WOG vocal number but more instrumentally stripped down. This one will make you either plan your next vacation in Arkansas or steer clear of the place forever. The Titanic is 12+ tasty minutes of whimiscal and strangely soulful Psych rock. WOG lay down a cool groove with an accompanying fuzzed/electro rhythmic pattern and free-wheeling wah’d and wigged out guitar soloing. The guitar has been a highlight on all the new millennium WOG recordings. The vocals tell the story of the Titanic sinking and have an ever so slight phased effect tacked on which makes a cool combination with the jamming guitar and oddball electro grooving pattern. Really killer spaced out Psych guitar which sounds so cool and strange along with the off-kilter yet cool grooving rhythmic pulse and soulfully robotic vocals. Drunkard’s Special features more rippin’ and rockin’ Psych guitar. A slide whistle jams along with the guitar which adds a quirky Punch and Judy dimension and certainly lightens the intensity. And when the theatrical vocals start getting crazy the freeform Psych jamming, slide whistle and vocals trio make for a wild acid rocking electro shock therapy jam. The fun continues with Crash & Burn Medley which starts off like a spin-off from Hendrix’s Star Spangled Banner. The guitar goes total freakout and when it fades we launch into a country fried bit of Americana song, before morphing into a combo of freaked out trip guitar, frenzied pulsating radio wave electronics and some kind of Area 51 type spoken word narrative, and eventually closing with an acoustic guitar and slide whistle Country-Folk song. Wow. Hairy is a down ‘n’ dirty heavy Psych rock jam with killer dual guitars and is probably the most straight-forward piece of music on the album. Not a smidgen of strangeness. Which sounds…. strange? But not as strange as Dynamite Joe, which is a damn good banjo and vocal number that permits itself to be a serious rendition of what Harry Smith must have been about. I don’t think I’ve EVER heard such “normal” (EEEEEK!!!) vocals on a WOG song. Surprise surprise…

In summary, WOG excel at being creatively off the beaten path, which may sound to the uninitiated like downright whackiness at times. But for me it’s all a really cool, good fun and distinctly WOG brand of loony bin Psychedelia and oddball songs that throw a much welcome art damaged wrench in the works.

Stream and download Walls Of Genius Meets Harry Smith and other WOG albums at: https://wallsofgenius.bandcamp.com
For an amazingly detailed Walls Of Genius history, including streaming of all their 1980s cassette albums, visit the Haltapes web site at: http://www.haltapes.com (and click the Walls Of Genius link at the top)