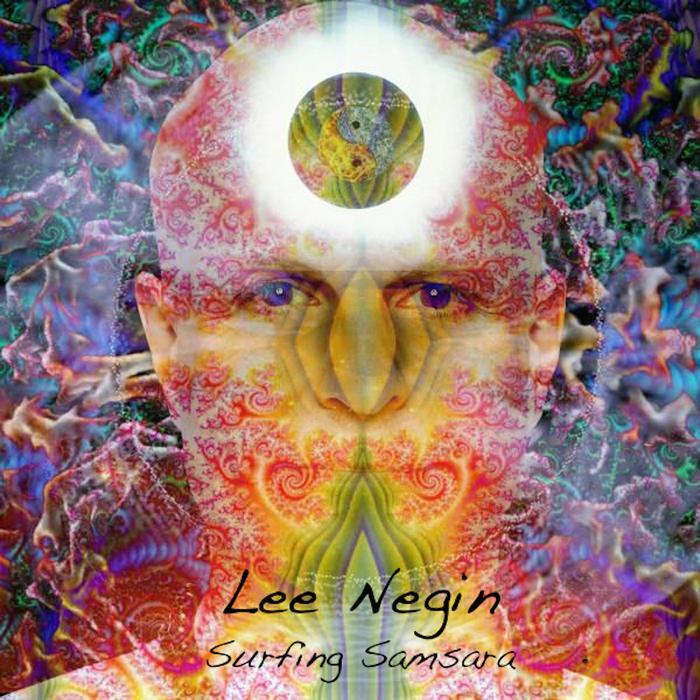 Though Lee Negin has been recording since the early 80s, he was a new discovery for me in 2014, starting with the tongue-in-cheek sci-fi “Technopera” Cheeze Chronicles, followed by the electronic freakiness and cerebral mind massage of Groundless, and then earlier this year he released Terminus, a 20+ minute EP described as a collection of 4 extended dreamscapes: The soundtrack for the 5D movie that “…takes place in the space between your ears.”

Negin’s latest is Surfing Samsara, a compilation of 11 tracks that are ‘singles’ from previous albums. We’ve got four songs from The Cheeze Chronicles: Volume V album. Loan Me a Paradigm is a mind-bending combination of Berlin school electronica and Space-Prog, with fun and freaky voice sample narratives. (Let’s Join) The Twit Parade is a robotic space-dance song that’s just as quirky as it is catchy. Just Saying is similar but more intense and spaced out, with cool New Wave cum Prog keys, soulful backing vocals and a lightshow of alien effects and voice samples. And The Cheeze Spreadz is a Techno-Funk with a Kraftwerk twist single that wasn’t on the original album.

We’ve also got an array of songs from various other albums. Masks is a masterful blend of quirkily pulsating Space-Dance, Gothic vibe, Oriental inflected orchestral elements and hauntingly weirded out voices and atmospherics. And as is so characteristic of Negin’s music there’s a wild glom of effects that are craftily mixed into the whole to ensure order among the chaos. Sterne Drek auf der Autobahn is a cosmic rug cutter that’s part Kraftwerk for the Rave set and part electro tribal dance groover. The Saga Of Cheeze is a get down with your bad alien self Soul-Funk number with raspy vocals and wild lyrics that make for a cool and strange contrast with the ripping robot Psychedelia, electro Space-Funk and multiple layers of soundscapes and effects. George Clinton and James Brown would love this. Jimi Plays Lhasa is a disorienting concoction of tribal drones, ambient waves and effects. The Dance has a cool tripped out morphing of ethnic stringed instruments, trip-hop grooves, symphonics, and (of course!) loads of fun effects. Mandala 1 features more freaky ethnic influences. I like the way Negin brings together ambient and hardcore rhythmic elements. And Piercing The Veil is similar, with cool Indian sitar and tablas and a ripping electro synth solo jamming to a pounding space-rave pulse.

With Negin’s music it’s all about the many parts and pieces and how they are stitched together, with rhythm, melody and Psychedelic/Surreal/Trip-Hop collage all playing equally important roles. Even the most danceable tunes have so much happening at once that surrendering your undivided attention and marveling at the details is your best bet.