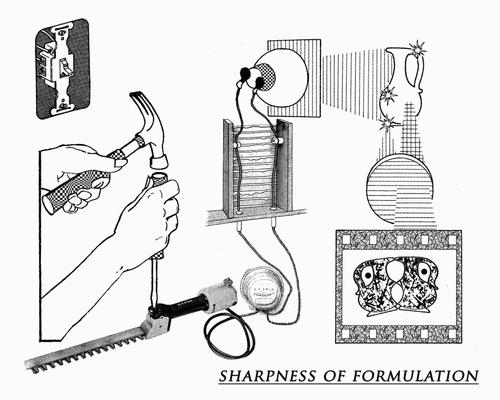 Charles Rice Goff III and Michael LaGrega follow up last year’s Organic Matter in the Midst of Space with a set of 6 experimental sound collage space explorations. The duo utilize an arsenal of synths, keys, electronics, effects, violin, bass and other devices to create excursions that are simultaneously mind-bending and chaotically disorienting.

The fun starts with Annulment Of Suspension, an intense combination of space symphonics, alien insect analyses and percussion. Whirring and buzzing electronics pepper the proceedings as space waves and drones variously rush and flow, punctuated by percussive blasts and blows. The Machine Economy consists of a contrasting blend of heavenly space symphonics and machine-like electronica, noise and percussion patterns, which soon develops into a chaotic but strangely rhythmic and melodic dance song, bringing to mind a Vangelis/Kraftwerk/Hip-Hop mashup. Goff created a very cool video for this piece, which you can CLICK HERE to view or get it in the download package listed below. Do yourself a favor and view it on your computer, iPad or some similar device. You will NOT get the full lysergic effect on your little phone.

Goff and LaGrega have more fun crafting dissimilar elements on the 17+ minute Amid That Which Is. Ambience, freaky alien electronics and a parade of instruments and sounds converge to create a dreamily intense symphony of controlled chaos. The intensity level gets kicked up a notch when the percussion blasts are introduced along with wildly swarming electronic patterns, though it’s all tempered by the underlying drifting ambience. The whole is a creatively perplexing glom of components that, once again, are brought together into a turbulent but craftily cohesive whole. Next we go into full blown cosmic orchestra mode on Plasticity Nullifies Vividness, which sounds like some kind of interstellar Leonard Bernstein. Analysis Of Being-In features more art damaged space-ambience and symphonics blended with various sounds, electronics and effects to create an intense avant-garde sci-fi soundtrack feel. Finally, The Manual Doorlock Buttons Of Perception is a multi-layered ambient/soundscape excursion with a 50s sci-fi soundtrack edge and a wee bit of zaniness that brings the set to an ultra-cosmic close.

In summary, Goff and LaGrega have a flair for bringing seemingly dissimilar elements together in creatively disorienting ways. Check out Sharpness Of Formulation for a deep space adventure that is both challenging and fun.

For LOADS of information visit the Taped Rugs Productions web site at: http://tapedrugs.com
Download Sharpness Of Formulation for free at: https://archive.org/details/SharpnessOfFormulation
Email Charles Rice Goff III at padukem@sbcglobal.net if you would like a CDR copy