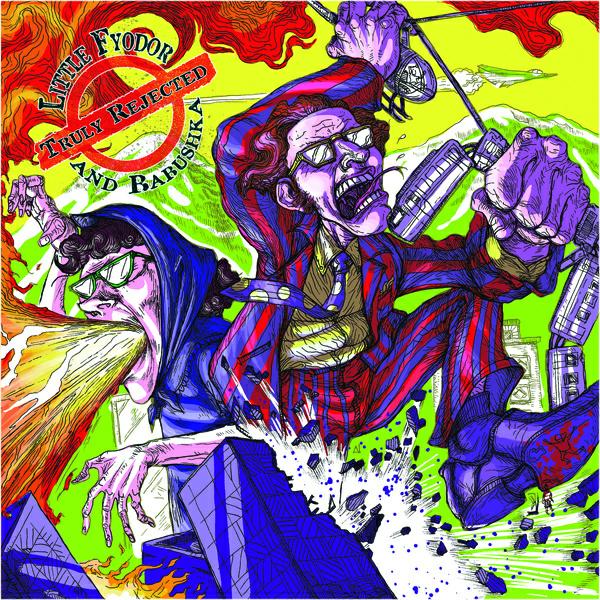 Little Fyodor is one the world’s truly fun and talented characters. He was one of the Godfathers of the American homemade music/cassette culture underground in the 1980s with his band Walls of Genius, who kicked started their activities in 2014 after a 30 year hiatus and have since demonstrated that they’ve still got it in a big way. Fyodor has been at it all these years under his own name too and after having covered the recent Walls of Genius recordings he sent me a care package with this latest single plus a couple from past years that I’d missed.

The latest from Little Fyodor is an 8-song 7″ vinyl single that showcases the current Little Fyodor & Babushka live lineup. Fyodor and Babushka share vocals on the Truly Rejected title tune, an organ and punchy guitar punky whacky rocker that revels in outcast loser rejection. The title is named in honor of Truly Rejected Magazine which looks to be a Denver, Colorado based arts mag. It Changes has a Punk meets 60s Garage-Psych vibe with super cool trip guitar leads from Amadeus Tonguefingers. Dave Willey’s guest keys on Bar Bar add an Etron Fou LeLoublon flavor to this fun punky tune. I got a kick out of the zany but sincere and impressively constructed Broadway show tune feel of Done That, Do This.

Since his earliest days with Walls of Genius cover tunes have been a staple of any Little Fyodor album and he has an unmatched flair for imaginatively demolishing classics of all styles and genres. I don’t have the words to effectively articulate the whacked out rocking whimsy that Babushka does to Rodgers & Hammerstein’s Girl Who Cain’t Say No (from Oklahoma). Gimme Gimme Shock Treatment is very much in the spirit of the The Ramones original though with Fyodor’s inimitable vocal imprint and Babushka’s lusciously cheesy organ adds a weirded out 60s flavor. And The Beatles’ I’m Down gets totally Fyodorized as a good time kinetic dance party rocker. 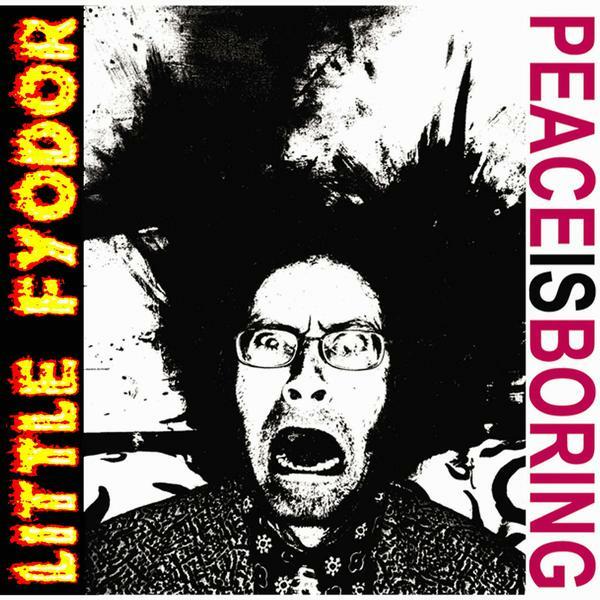 Little Fyodor’s 2009 released Peace Is Boring is a 14 song set of cleverly crafted madcap fun. I love the Barnum and Baily circus band Punk-Psychedelic tight-as-a-knot sublime insanity of songs like That Was A Mistake, Spider Dream, and You Don’t Know. The cover tunes, as usual, are all over the map. Death Sides Now takes Joni Mitchell’s Both Sides Now and totally Fyodorizes the lyrics. Fyodor and Babushka treat the 50s classic Open Up Your Heart (and Let the Sunshine In) like they’re contributing to a Punk Rock children’s compilation. Babushka does her best Nancy Sinatra on Lee Hazelwood’s Boots. Well… actually she’s just being Babushka. Dig that banjo and Garage Rock backing.

Similar to Truly Rejected, songs like All My Clothes Are Uncomfortable showcase the loser as less alienated and tragic than he might seem and more down to Earth comical. Cruising (Bummer Scene) is a little different, being a darkly chunky rocker with spacey horror show effects, whimsical bell percussion and a cool Country-Blues guitar solo. I lile the Jazz-Scat gibberish of Everybody’s Sick. Babushka goes into angst mode on the Country fun The God Gripe Song, another tune that if you ignore the lyrics sounds like it would be ideal for a children’s record. I really dig the ominous whack job Zappa-Prog-Psych of Peace Is Boring. Fyodor goes Post-Punk Reggae on The Natural Progression Of Life. Death Wish is part Fyodor does Spinal Tab and part filthy dirty screaming Grunge-Psychedelia. Finally, Fuck-a-duck-a-luck-a-luck-a-ding-dong is a merry semantics be damned whackadoodle dandy of a closing number.

As whacky as it all might seem on the surface, Little Fyodor’s songs are tightly and imaginatively arranged, and he’s got the assistance of solid musicians. A splendid time is guaranteed for all. 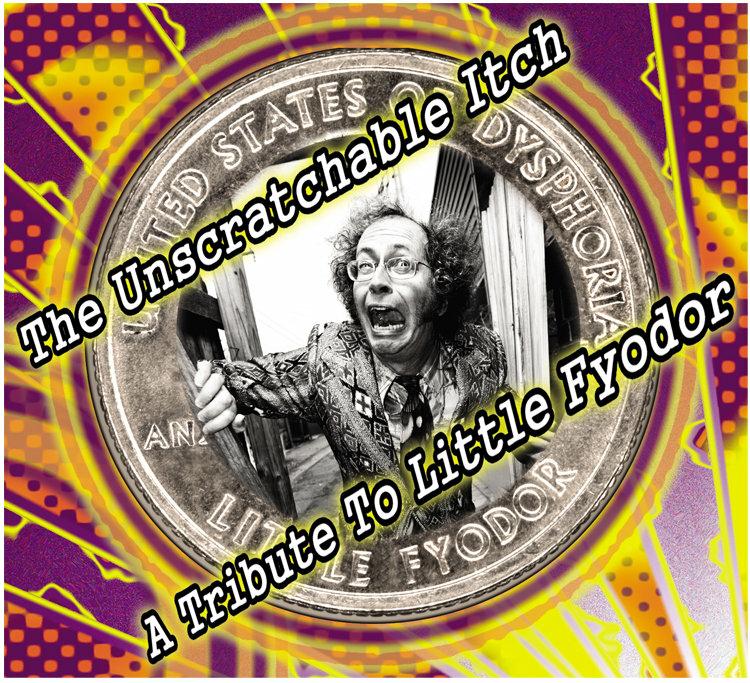 I’ve got to hand it to Little Fyodor. Nobody sounds like him. Hell, he even rates a tribute album. The Unscratchable Itch: A Tribute to Little Fyodor consists of 21 artists doing their own renditions of Little Fyodor songs. The interpretations run the gamut from “relatively” normal, to attempts to go Fyodor style, to doing precisely what I always hope will occur when someone does a cover song which is to make it completely their own.

All the contributors do a good job but I’ll give you a flavor of what for me are the standouts: The Voodoo Organist does a nasty 60s Garage-Psych rocking take on Get Out Of My Head. I love Dan Susnara’s lounge crooner take on You Give Me Hard On, nicely colored by incessant vinyl scratching and goofy effects. The Inactivists take the same song in a different direction, giving it a sultry Psychedelic-Jazz spin. Nobody but Amy Denio could make a Little Fyodor song sound lovely like she does with her Avant-Pop version of The God Gripe Song. Brian M. Clark is totally demonic with his sludgy Psychedelic-Doom rendition of Happy People. Diablo Montalban does a very cool and wildly chaotic cheesy keyboard and Throbbing Gristle Industrial version of Cruising (Bummer Scene). Gort vs. Goom do a very cool tripped out cover of I Don’t Know What To Do that’s like The Residents and Renaldo and the Loaf backing a singer, though it’s also got a tasty guitar solo. Fyodor’s brother moron in Walls of Genius Evan Cantor does a cool swinging lounge-Blues version of I Wanna Be The Buddha. Swami Loopynanda (Charles Rice Goff III) goes lysergic mind-fucked Psychedelic with his wigged out Residents gone Space Rock interpretation of Red Meat/Throbbing Earthworm. Darren Douglas Danahy is nicely spaced out too with his funky freaky electro-grooving cover of No Relief In Sight. The spaced out whack job vibes continue with Reverend Leadpipe and the Evil Do’ers doing an ultra-frenetic and rhythmically disorienting You Will Die. Blood Rhythms do what is probably the most challenging to recognize cover of a Little Fyodor song with Won’t Somebody Fill The Void. No surprise given that it was recorded live at the 2012 Denver Noise Fest. Lasse Jensen (who also curated this compilation) does a goofily rollicking cover of Everybody’s Fucking. And Nervesandgel do a nifty rhythmic Residents and darkly electro freaked out rendition of Doomed.

Well… If you’ve read this far than I’ve apparently got your attention. Much fun awaits you at the following links…

To stream, download and purchase these and other Little Fyodor albums visit: http://littlefyodor.bandcamp.com
Visit the Little Fyodor web site at: http://www.littlefyodor.com
There’s lots of interview and live performance segments with Little Fyodor in the just released Great American Cassette Masters DVD documentary that I highly recommend. Check it out at: http://www.talkstoryfilms.net. You haven’t lived until you’ve seen Little Fyodor performing with a birdcage on his head.