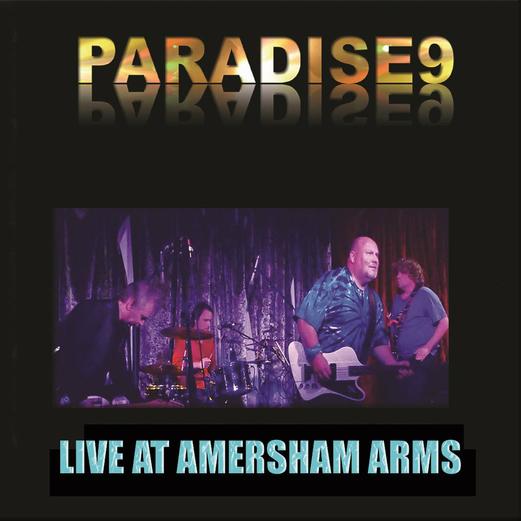 The latest from Paradise 9 is a smokin’ set of music from the band’s November 30, 2014 performance at The Amersham Arms SheepDog Bash2, which was a Sheepdog Records and promotion bash.

I recognize most of the songs from the past few Paradise 9 albums and EPs. The set opens with the Punk infused and spirited Rock ‘n’ Roll of Nothing For Tomorrow, which includes cool spacey/psychy guitar. The Space Rock flag flies high on Into The Ether, with its combination of searing acid-ambient and melodic guitars, alien synths and wailing horn. Hawkwind fans will dig this. Paradise 9 switch gears again with the bouncy melodic and 80s Pop imbued Broken Promises. Damn good catchy song. The catchy melodic hooks continue on the lightly Space/Psych colored Distant Dreams, which plays like a 70s inspired anthem. Were bodies swaying at the Amersham Arms during this one? Ditto for the dreamily flowing and meditatively melodic Crystalized Moments, which has a potent Pink Floyd vibe.

The 15 minute Points Of View/Take Me To The Future is the epic of the set, starting off as bouncy grooving rocker. I like the combination of punky edged Rock ‘n’ Roll, trippy soloing flute and Psych guitar leads. After several minutes the music seamlessly shifts to a Hawkwind/Space Rock and still high energy rock ‘n’ rolling jam, with wailing cosmic horn, spaced out guitar, synths and effects. After a while we soar into a thunderously soundscape and efx’d transition before launching into the edge-of-your-seat tension-laden space rocking Take Me To The Future segment, which includes the best deep space instrumental segments of the set. File under absolutely fucking AWESOME! Finally, we’ve got the short and to the point State Of The Nation, which begins with a shout of, “Any Punk rockers out there!!!?”, and we’re off and Space-Punk-Jam ROCKIN’. Killer set. What a great live band.

Visit the Paradise 9 web site at: http://www.paradise9.net
You can also stream, download and purchase at: http://paradise9.bandcamp.com