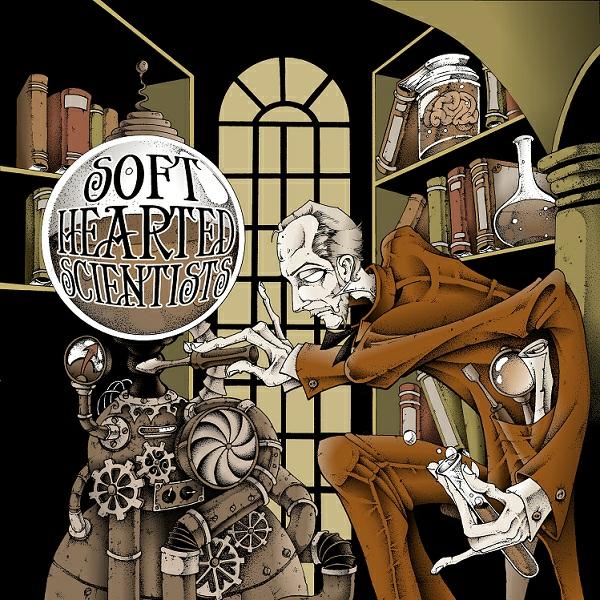 It’s unusual for Fruits de Mer Records to release a full LP of a band doing all original music so when they do it’s gotta be good, and this sucker is a 2-LP + 7″ package. Soft Hearted Scientists are the Welsh quartet of Nathan Hall, Dylan Line, Paul Jones and Michael Bailey. They formed in Cardiff in 2001 as the duo of Hall and Line, making cassette demos in Hall’s house, and have been releasing albums since 2005. Whatever Happened To The Soft Hearted Scientists compiles Fruits de Mer’s favorites from the band’s CDs, plus a title track exclusive to this set, songs from their soon to be released new album, and a 7″ consisting of previously unreleased demos. We’ve got a total of 23 songs here so I’ll give you the skinny on some of my favorites that should provide a good feel for what the band are about.

Soft Hearted Scientists cover a fair range of territory. The music is heavily 60s influenced and mostly folk-psych and pop-psych based, though the band incorporate traditional influences, progressive rock, and much more. Mount Palomar is a seductively dreamy folk-pop tune with a 60s vibe and spacey alien effects. I love how it starts off acoustic driven and then blasts off into a lush and uplifting chorus. The space effects are front and center on the haunting yet melodic Wendigo. The tale of the The Yongy Bongy Bo combines traditional folklore elements with a pagan folk feel. The acoustic guitars and vocals are enchanting on Siberia, and the looped effects and keyboard lines add multiple layers that keep things continually interesting on this beautifully flowing song. Rockford’s Return is a fun, quirky, spacey acid-psych-pop song. Eyes has a stick-in-yer-craw melody that sounds straight out of 60s pop-psych, but incorporates the fun freaky space effects that the Scientists seem to like so much. Most of the songs are in the 3-6 minute range, but The Caterpillar Song is a 10 minute epic. It starts off as a spaced out folk infused pop-psych song and eventually builds into full blown progressive rock, with BIG keyboards, a ripping tripped out guitar solo, and oscillating UFO effects. Wow! Road To Rhayader consists of mesmerizing psychedelia, with its hypnotic melody and vocals, interweaving acoustic and electric guitars and marching rhythmic pace, and all-around beautiful instrumental arrangements. The Scientists show their flair for foot stomping music-hall fun and whimsy on Halloween People. And the four songs on the 7″ may be billed as “demos”, but they’re as good as anything on the LPs, my favorite being Newest Things, a stellar example of immaculately produced 60s influenced pop-psych.

In summary, this is a thoroughly captivating set of music, with outstanding compositions, arrangements, and excellent production. I agree with the folks at Fruits de Mer… this is a special band.