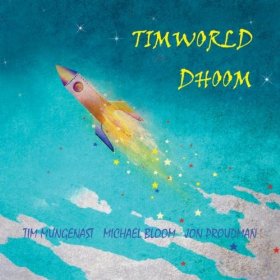 At Aural Innovations we were first introduced to Massachusetts based singer-songwriter Tim Mungenast’s work through his 1999 Birth Of Monsters and 2002 The Un-Stable boy albums, both sets of psychedelic pop and quirky rock songs. On his 2008 Steam-Powered Mars Lander album, Tim explored very different territory with some avant-garde and psychedelic improvisational instrumentals.

Timworld is the trio of Mungenast on guitar and vocals, Michael Bloom on bass, and Jon Proudman on drums. Many readers will know Bloom and Proudman from the band Cul de Sac, and if you don’t then look them up in the AI alpha index and you’ll see loads of reviews and an excellent profile/interview that Jeff Fitzgerald did in AI #20.

Dhoom consists of live performances from 2006 and 2010, including both short tunes and lengthy explorations. And while there are some vocals, the album is dominated by the trio’s brand of jazz-rock fusion and spaced out psychedelia, with healthy infusions of Beefheart, Hendrix, and more. The CD opens with the 9 minute title track, a jam rocking instrumental with a late 60s San Francisco psychedelic vibe, though the rhythm section has a jazz-rock Cream-like groove. Tim’s leads conjure up thoughts of Neil Young as the guitarist on Trout Mask Replica, if you can imagine that. This leads directly into the twisted avant-psych rocking Space Goat, “a song about a goat that fights crime in outer space”. How can you NOT love that?!!

Cerulean is a short instrumental with lulling melodic guitar leads. Making Scary New Gods Out of Corn Husks features a cool combination of fuzz bass, soundscape guitar and guest (Karen Langlie (aka Wisteriax) on cello adding to the atmospherics. Spinach is one of the vocal numbers and a song from Tim’s Birth Of Monsters album and includes additional harmonies from Kelly Godshall. I dig the warbling surf-Blues guitar and Tim launches into a bit of raunchy acid rock for the finale. Karen Lost In Middle Earth (Mist and Boulders) is an 11 minute avant-space-jazz-soundscape jam. The cello is back, creating much of the strange scratchy atmospherics. And there’s some really cool and creative bass and guitar interplay, with the bass taking on a wild aquatic sound, like a fretless being played underwater. Moon Tropism is an instrumental jam with a powerhouse jazz-rocking rhythm section and spaced out snake-like guitar leads.

Penned by Jon Proudman, Turok, the Goatherder is, not surprisingly, a percussion driven instrumental. The drumming is relentless high powered jazz-rock, augmented by spacey soundscapes, jazzy bass leads and freaky cavernous guitar leads. Very cool. Dreampipe is a jamming acidic jazz-rock instrumental with a cool grooving rhythmic pulse against which the guitar explores, creating psychedelic jazz solos, whimsical melodic bits, carefully drawn out efx’d licks, and gets a bit into Beefheart territory. Finally, Mersault’s Blues, a 3 minute song on Tim’s Birth Of Monsters album, is an 11 minute combination of melodic rock vocal number and psychedelic-jazz-Beefheartian improvisational fun. Lots of cool tripped out guitar explorations and some of Tim’s most manic soloing of the set.

In summary, this is psychedelia with a twist. Or maybe I should say twisted psychedelia. Whatever you want to call it, the Mungenast/Bloom/Proudman trio are drawing on a variety of influences to make creatively unique music. I can’t emphasize enough the importance of the Bloom/Proudman rhythm section, which could hold their own with the best jazz-rock musicians. Along with Tim’s guitar, we’re treated to a set of freaky psychedelic fun that stands well outside the box.

For more information you can visit http://www.timmungenast.com