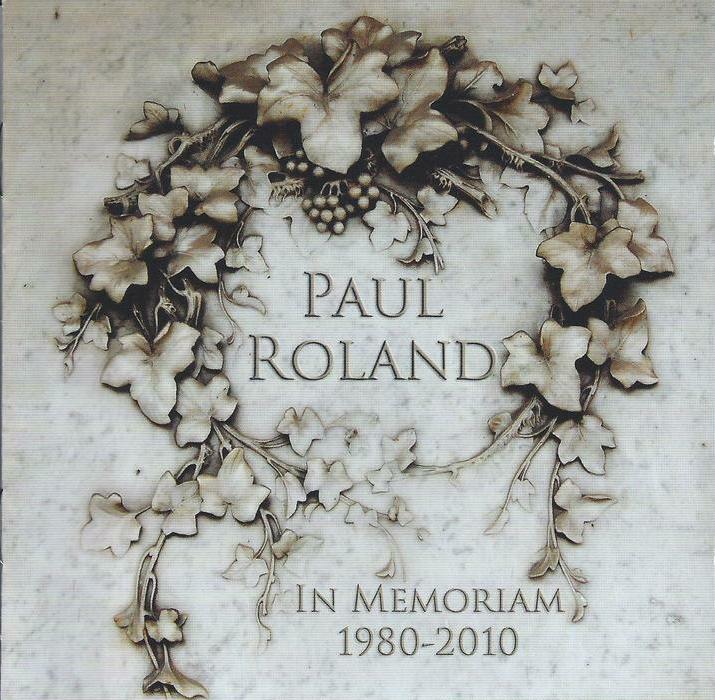 British singer, song-writer, musician and author Paul Roland has released over 15 albums since 1980, covering a range of Psychedelic-Pop, Gothic-Psych-Baroque, Gothic-Prog, Prog-Psych, Dark-Folk, and every imaginable cross-section of these styles. I’ve heard scatterings of Paul’s music over the years but the 2-CD compilation, In Memoriam: 1980-2010, is my first immersion into what his music is about.

He’s a pretty fascinating guy, as I learned from reading the many interviews at paulroland.de. Paul’s first real captivation with music came after discovering Marc Bolan, and was even managed by Marc’s widow June Bolan in the early 80s. Paul was also a music journalist in the 80s, writing articles, reviews and interviews for Kerrang and other UK music and film publications. I got a kick out of the sizable list of subjects Paul interviewed, which included a range of artists including Lemmy, John Lee Hooker, The Velvet Undergound, Slade, Yo Yo Ma, and… get this… Hammer horror icon Peter Cushing! Pretty cool, huh? Paul has also written many non-fiction books on such topics as reincarnation, angels, ghosts, meditation, the Nuremburg trials, murderers, a Marc Bolan biography, and more.

Paul has divided the In Memoriam compilation into two parts. The first CD consists of 17 full band songs. Among the highlights is Blades Of Battenburg, a powerful Prog infused rocker with a symphonic edge. I love the eerie wailing keyboard on the simultaneously dreamy and whimsical The Puppet Master. The acoustic Goth-Prog Requiem is a standout, with its beautiful flute and violin passages. Dr Strange, Gabrielle, and Nosferatu all bring to mind Power-Pop for Goths. High intensity organs are common on many of these songs. As you might expect from the title, In The Opium Den is a mind-bending, atmospheric tune, and just as much of an excursion as it is a structured song. Dig that trippy sitar. Paul invites us to “take a magic carpet ride” and “join my desert caravan” on A Thousand And One Nights, another standout song, being a cool grooving psych rocker that’s nicely acidic and even a little Celtic. Ditto for Cthullu, with its orchestral melloton-ish keys and winding psych guitar trading licks with violin. We’re also treated to plenty of chunky kick-ass ROCK on songs like Witchfinder General, Aleistair Crowley, Gargoyles, and Come To The Sabbat, the latter of which veers off into a killer dueling percussion and violin segment.

The second CD has 19 songs which Paul describes as the baroque chamber pop and Edwardian folk tracks. I like that description, and to my ears the songs fall roughly into two general categories. We have acoustic Pop-Psych with orchestral embellishments and a 60s vibe. Standout tracks that I’ll mention include the beautiful Great Edwardian Air-Raid. Alice’s House stands among the best of 60s orchestrated Pop-Psych, and especially resonated with me as I recently finished reading Lewis Carroll’s Alice stories for the upteenth time. Ditto for the heavily orchestrated folk based Poets And The Painters. And Captain Nemo is a stunningly beautiful song, being a spaced out Prog-Pop-Psych journey to dreamland.

Then we’ve got several Folk-Psych songs with gently flowing strings, flutes, and keys. Lon Chaney, Wyndham Hill, The Ratcatcher’s Daughter, and Moriarty all grabbed me on the first listen. The horn melody on Journey To The Pole brought to mind the old Alfred Hitchcock Presents TV theme run through a Renaissance Fair grinder. Lots happening on this 4 minute song. The Sea Captain is a somber song that conjures up powerful images of the crusty old captain telling his tale. The strings on this song will bring tears to your eyes. Dice With The Devil is an upbeat song that’s far more rocking than most of the tracks on disc 2, but one that I envisioned being sung by the same sea captain of the earlier track. Voodoo Doll has a cool beat, yet is dreamily drifting and even a wee bit sultry. And Abramelin is another stunning beauty, with heavenly keys and choral vocals.

Paul is an excellent songwriter and lyricist and has a somewhat unique voice; the only analogy I can think of is Edward Ka-Spel of the Legendary Pink Dots. And while he is singing, he has a sort of narrative delivery style on a lot of the songs that I like and helps give him his own distinctive character. The production is outstanding, with top notch musicians, and music that is complex yet thoroughly accessible. Guest musicians that have contributed to Paul’s albums include Robyn Hitchcock, Bevis Frond, Nick Nicely, Knox of the Vibrators and Andy Ellison (of John’s Children), and I’ll say that Hitchcock and Nicely fans are sure to enjoy Paul’s music. Oh, and I should emphasize that despite the In Memoriam title and the wreath on the cover, Paul is very much alive and has released two new albums since this compilation came out in 2010.