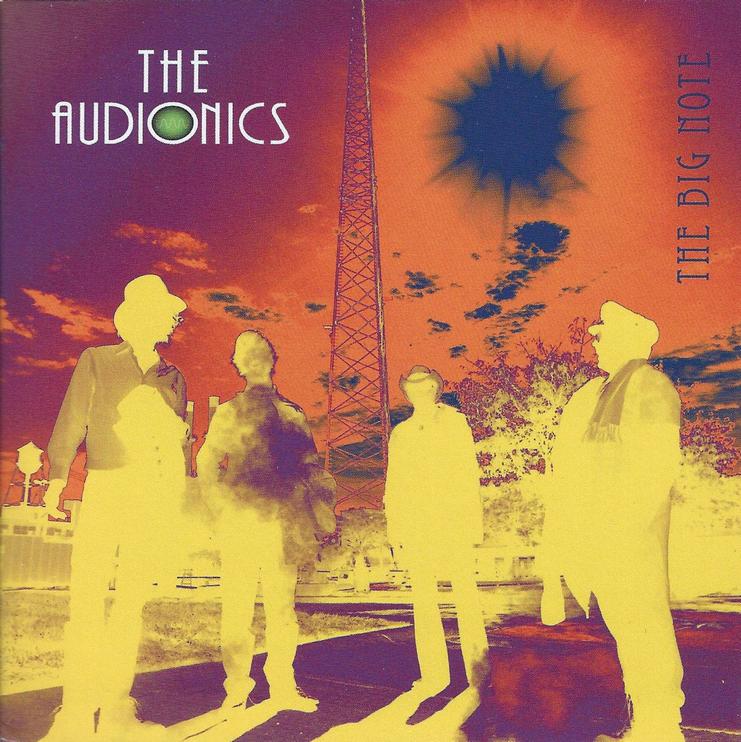 The Big Note is the debut release from Michigan based Audionics (which means “the science of audible electricity”). The band are the quartet of Leo Gillis II on vocals, Sheldon Santamaria on saxophone, Djeto Juncaj on guitar and santoor (an Indian hammered dulcimer), and Kerry Gluckman on drums and percussion. I’ll get Aural Innovations readers attention by mentioning that Gluckman was in THTX, though The Audionics are far and away from the space rock that THTX played.

The CD consists of 9 tracks in a relatively brief 36 minutes, but The Audionics make their point clearly and concisely in that timeframe. The album opens with Three Minute Opera, the first half of which is kind of country-punky, then shifts to a more angular, off-kilter rocking segment, and the saxophone has a droney yet melodic sound that I liked. Things really start getting interesting with Poison Ring, on which each musician, including Gillis’ vocals, seem to be operating in their own space, like a free-form Beefheartian rock and jazz jam that comes together as a song. The sax, guitar and drums work together nicely in terms of cooperative contrast, while Gillis sounds like he could be free versing the vocals. The promo sheet references Van der Graaf Generator and on Six Months To Live I hear bits of them during the heavier guitar and sax moments, but I hear just as much of the whimsy of Etron Fou LeLoublon as well, which is one hell of a wild and whooly combo. The jam moments are brief but killer on this track. The title track is like a doomy metallic blend of Van der Graaf Generator and 80s King Crimson, and Gillis’ vocals even sound a bit like Adrian Belew during the chorus, though his style of delivery is otherwise largely his own. Minimime is a heavy, chunky rocking jam, with the guitar and sax chugging along together, taking multiple compositional twists and turns on this less than 3 minute song.

In an email exchange, Kerry Gluckman pointed out that the tracks were organized with a vinyl release in mind (which they hope to do), where side one starts with the more aggressive songs and morphs into eclecticism as it progresses onward into side two. I’m guessing The Madness Of Vincent Van Gogh is where side two would begin as we’re getting into different territory with Juncaj pulling out his santoor. The dulcimer and Indian vibes make for a unique and interesting sound combined with the sax and Gillis’ vocal style. It’s melodic and has a nice groove, but also takes some strange and fun detours, partly into what sounds like an avant-garde children’s song, and I like the freaky spaced out finale. Ex Angel 13 is melodic and flowing, yet at the same time has that angular, off-kilter feel. Hold Your Breath is dark and moody, like a spacier take on the earliest jazzier King Crimson. Think Cat Food covered by Soft Machine. And Black Grapes reminds me of The Muffins, a band who took the old Canterbury-Prog sound into new dimensions in the 80s. This track has the most traditional saxophone sound I’ve heard on the album and Santamaria takes the lead with some beautiful soloing. It really sounds like there’s a bass on this song. I should mention that the promo sheet describes how the band compensate for the lack of a bassist by playing the sax through an octave divider and Gluckman modified his kick drum and wide-open floor tom to create a bass sound. It must have worked because I didn’t even think about it until this last track when I thought I was really hearing a bass.

The songs are mostly in the 3-4 minutes range (a couple reach 6 minutes) and these guys accomplish a lot of compact compositional complexity in that time. They also knock out a lot of music with just guitar, sax and drums, though, to his credit, Gillis has a vocal style that is very much a fourth instrument. Analogies are really tough with these guys and ultimately only reference points. I heard elements of the so-called New York City downtown sound that bands like Material, Bill Laswell, and Mofungo were creating in the 80s, though Van der Graaf Generator, King Crimson, and Captain Beefheart are present as well. Lots to recognize but ultimate quite different. A fun and creative effort that steps off the beaten path.