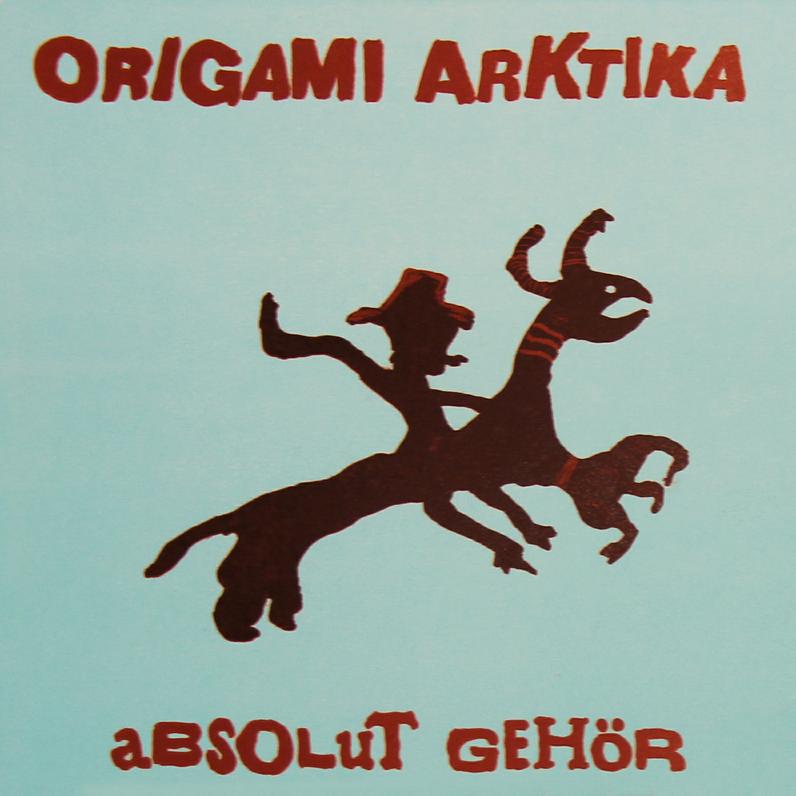 From Norway, Origami Arktika play traditional Norwegian folk music mixed with psychedelic and a variety of experimental/avant-garde influences. There’s a lot of variety across the eight tracks on their new album, Absolut Gehör.

Most of the pieces are Origami Arktika’s interpretation of traditional songs, with the exception being the opening track, Ro og hamle, which was improvised in the studio by 8 musicians. A spacey soundscape organ serves as the foundation for the freeform manipulation of stringed and percussive instruments. The organ creates an eerie sense of foreboding, punctuated by a rhythmic thrum, while the other instruments seems to gel and glide along smoothly, despite the clatter, as if controlled and propelled by the organ. Bryggja te jol is an avant-noise/drone/folk/psychedelic tale of love and loss with vocals in Norwegian. It starts to rock out in its own strange way with the bass and drums creating a dark intensity. The screechy drones and what sounds like might be an efx’d harmonica inject a psychedelically bewitching vibe. Based on a 12th century Old Norse epic poem, Hattalykill consists of the same experimental feel and instrumental manipulation heard on Ro og hamle but adds vocals, making for an interesting combination of avant-garde free-improv and traditional Norwegian folk song. Folkestadvisa a short tune that sings of lost love against an ambient minimal drone backdrop. Tora Liti tells the tale of a young girl betrothed to a prince of England but ends up dead because of the doings of an angel in the shape of a dove. Pretty wild stuff this traditional Norwegian music. The psychedelic-folk music is enchanting but also grooves in its slow subtle way. It feels like sitting around a tribal campfire stoned on the local ceremonial brew. Det syng for Storegut is very different, sounding like an outtake from a mid-90s album by the Finnish band Circle, though I detect bits of Korai Orom as well. It’s got that awesome off-kilter but hip-shaking groove that characterized Circle, along with haunting atmospherics and demonic rumbling and howling spaced out noise-drone guitars. Skonde deg du jente closes the set and is a short song based on lokk, a calling of the livestock, and sings of a girl called to hurry up and bring milk to her illegitimate daughter. Ya gotta love that.

In summary, Absolut Gehör is an intriguing album that took me several listens to really tune into. Origami Arktika excel at incorporating avant-garde elements to create music that is challenging but ultimately accessible. These guys are different and they do it well. 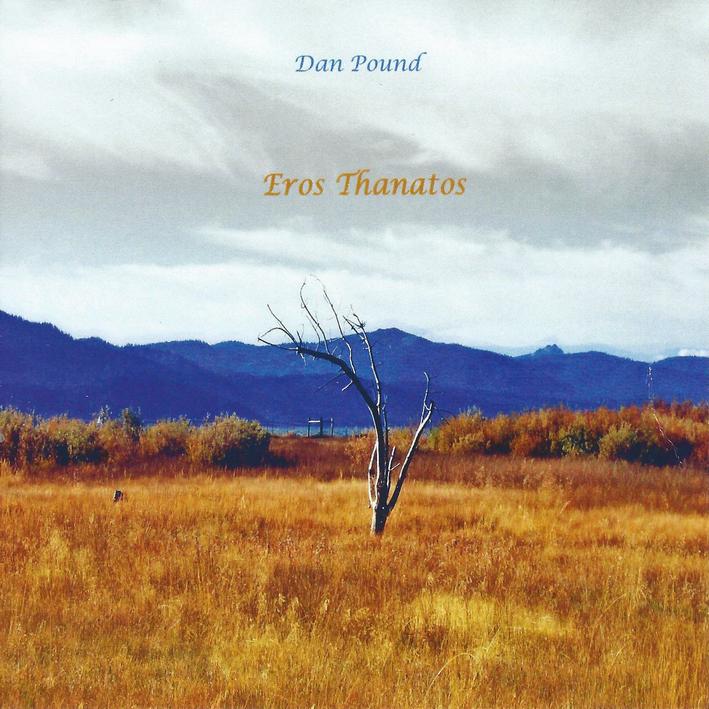 Prolific ambient electronic space musician Dan Pound is back with his latest album, Eros Thanatos (Greek for Love and Death). Dan explains on his web site that though analog and digital synths are prominent, the music on this album is based mostly on guitar soundscapes. “After trying on some newly acquired guitar effects, I decided to do a whole album dedicated to these guitar sound worlds I was discovering. Using different guitars, effects, techniques and ideas, I was able to extrapolate a myriad of tonal timbres that resembled other instruments like organ, strings, oboes, bassoons and even human voices.”

The result is 70 minutes of Space-Ambient bliss. From Love And Grace opens the set and is representative of what the album is about. The music washes over you in luscious waves of sound that are the sonic equivalent of a full body massage. I like the blend of space-orchestral and drone waves, and Dan later introduces syncopated patterns that hop up the energy level a tad. Listening with headphones the mix was ideal; the drones humming steadily and meditatively in the center of my brain, the lively patterns dancing above, and heavenly aura encasing it all. Finding Beauty is similar but with a heavier symphonic edge and cool effects that inject an aquatic vibe. Between Breaths brings in additional elements with slowly grooving percussion and mind-bending slide guitar. Incarnate is more purely ambient and sound exploratory, with a variety of effects that created images in my mind of life in some alien rainforest. Shadow In The Dark starts off quietly ambient but gets increasingly intense as it evolves and has a soundtrack feel, though the wind instrument and chanting vocals add a contrasting Eastern feel. Eros Thanatos shifts to a more light-hearted mode, with keys that give the music a New Age Space-Prog feel. Towards The Light starts out dominated by intensely cavernous drones, which are tempered, and eventually overcome by heavenly space-waves and lightly dancing synth patterns. Both this and the next track, From Beyond, have the most “normal” sounding guitar I’ve heard yet. From Beyond closes the set on a gorgeously cloud floating note, though the symphonic waves get intensely spiritual, and I like the combination of guitar and mind massage waves. Nice one Dan. 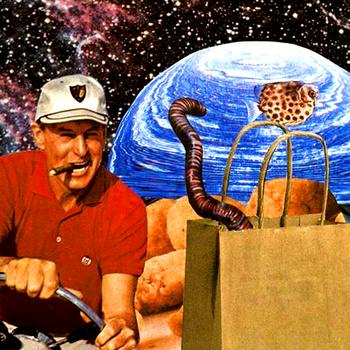 Unus Mundus was formed in Athens, Georgia in 2001 as a solo vehicle for musician Steve Fitzpatrick. He released several of what were essentially solo albums before turning the project into a band. His latest effort – Type V Civilization – was recorded by a quartet, though Steve reports that Unus Mundus is once again largely just him. (CLICK HERE if you want to know what a Type V Civilization is.)

Unus Mundus music is characterized by the kind of experimental, punk and industrial fueled Space Rock that drove bands like F/i and ST 37. Fitzpatrick’s influences range from Hawkind, Pink Floyd and Amon Düül II on the one hand, to Throbbing Gristle, The Cramps, Captain Beefheart and beyond. And it shows throughout this album, though Space Rock and Psychedelia are ultimately the core of what Type V Civilization is about.

The album opens with Intergalactic Consumer Zombies, a good time Psychedelic Rock ‘n Roll tune with a dirty garage edge. Make Hollywood is a drugged, droning Psychedelic jam that’s like a cross between the instrumental portion of The Doors’ The End and early Amon Düül II played at half speed. I like how it trips along at an off-kilter pace, freeform jamming and throwing oddball effects in the listener’s path as it conjures up images of some late 60s freakout night at Berlin’s Zodiak club. The tripped out jamming continues on Ozymandias, a darkly intense spaced out dirge with squonky wailing saxophone, a Teutonic rhythm section, eerie keys, and dissonant guitars that make the whole thing Psychedelically noisy, with a punky air of violence about it. This one reminds me of ST 37. I like the free-wheeling Psychedelic-Blues peppered with alien electronics on The $2.00 Wine Superdeluxe. The Strange Case of Nehemiah Wade is a strange piece, with a mind-fucked jam that lays the foundation for a parade of samples and a non-stop obscenity laced rant by a decidedly pissed off black male. Try to ignore the tirade and you’ll hear a killer instrumental that’s totally dirty and noisy but does a real number on the brain. File under Experimental Industrial Space Rock. Finally we’ve got Mute Witness / Stuporjam, a cool jam that takes the best of 1980s F/i styled noisy, experimental Psychedelic Space Rock and makes it a 17 minute brain frying endurance test.

If you like your Space Rock lo-fi, noisy, freeform jamming, and with a punky experimental attitude, then you’ll dig Unus Mundus.