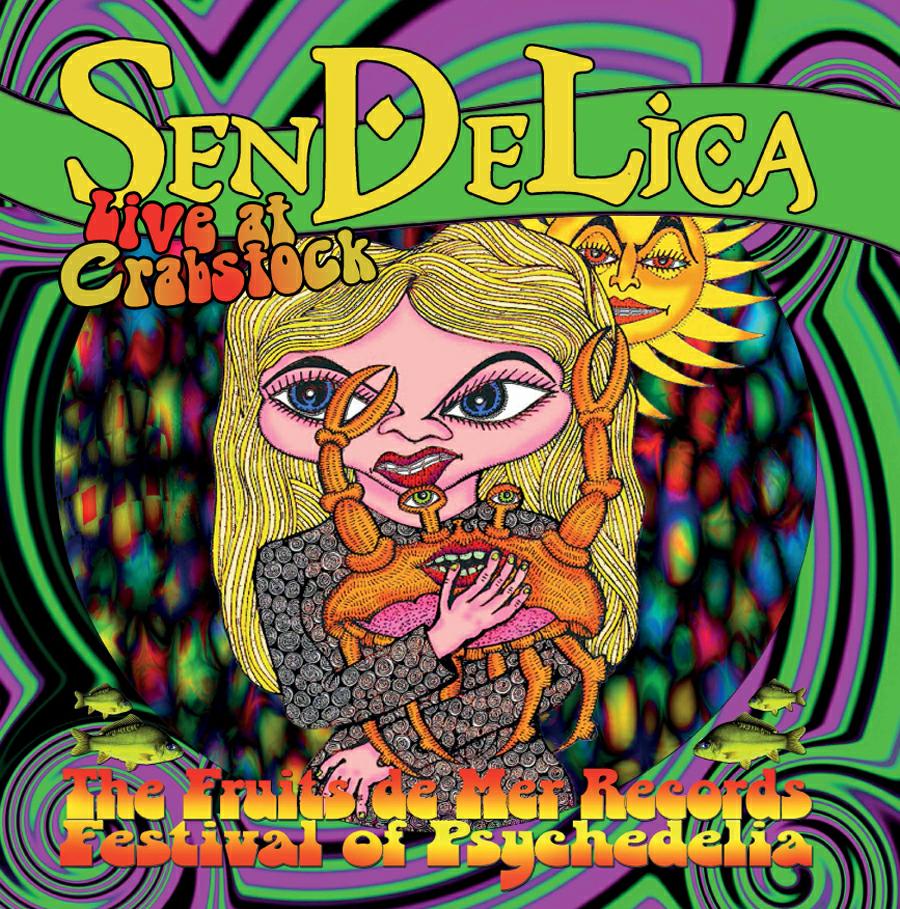 Held on April 26 of this year at the UFO Club, Cellar Bar in Cardigan, Wales, Crabstock was a gathering of bands that have recorded for the Fruits de Mer label. In addition to Sendelica the lineup included Earthling Society, Crystal Jacqueline, and Jack Ellister (I think that was all). Live at Crabstock Wales 2014 documents Sendelica’s performance, and what a smoker it is.

Sendelica come roaring out of the starting gate with a brief heavy intro, before launching into a monstrously Space-Acid-Metal rocking 16 minute version of Manhole Of The Universe, which at times recalls Guru Guru at their most cosmic, incorporates spaced out 70s Hard Rock, and I always dig that wailing jazzy Sendelica sax. The band eases the pace, if not the intensity with the next tune, Set The Controls For The Heart Of The Buddha. The sax leads the way, soon joined by guitar and synths, and it’s all propelled by a chunky driving rhythmic pulse. After a few minutes the guitar and sax launch into the main riff from Set The Controls For The Heart Of The Sun, sounding like a Space-Metal version of Gong covering the Pink Floyd classic. Motorik Jam is a blazing but swinging rocker played against a… you guessed it… Motorik pulse. Screaming And Streaming Into The Starlit Nite is a Space-Rock/Lounge-Jazz jam that rocks hard but is also a swoon inducing crooner. The Return Of The Maggot Brain is Sendelica’s cover of Funkadelic’s Maggot Brain, originally released on a Fruits de Mer single (backed with Venus in Furs) and performed here live for the first time. Sendelica are faithful to the spirit of the original, but amp up the acid guitar and add fun electronic effects. And closing the set is the stoned, jamming, acidic space rocking Spaceman Bubblegum.

God damn, I wish I was there. I’ve been following Sendelica for years and they deliver the goods live. The album is available in LP, CD and download editions, and if you visit their Bandcamp site you’ll see various configurations, including a box set.

To stream and order visit the Sendelica web site at: http://sendelica.bandcamp.com