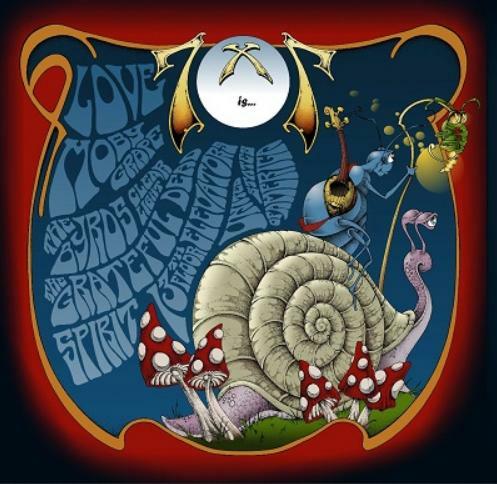 7 and 7 is is a box set from Fruits de Mer Records containing 7 vinyl singles featuring 8 contemporary artists covering songs by 1960s US psych bands. Here’s the run down on all…

The Bevis Frond Salomonize two songs from Clear Light’s sole 1967 LP. We’re treated to monster guitar on both Night Sounds Loud and Sand, and Nick amps up the originals with some powerhouse organ.

The Higher State take the 13th Floor Elevators’ Wait For My Love and give it an even more energetic jangly but rockin’ pop-psych feel, while the guitar remains tastily acid-fuzzed. And their cover of You Don’t Know has a dead ringer 60s feel.

The title of this boxed set is a song from Love’s Da Capo album, but The Chemistry Set’s single covers two from Love’s 1967 Forever Changes. A House Is Not A Motel starts off similar to the original in acoustic driven Folk-Rock style and then blasts off into a killer psych jam. Nice touch on the acoustic finale. Ditto for Live and Let Live, which is faithful in spirit to the original and has lovely acoustic instrumentation and an explosive finale.

The United States of America has long been recognized for their use of avant-garde electronics in rock music and Sendelica tackle two from their 1968 LP. Sendelica’s cover of Hard Coming Love has, not surprisingly, some ultra-monster rocking psych guitar, but also inject fun freaky electronic effects. Going in a completely different direction, Sendelica take the gently pastoral Love Song For The Dead Che and make it even more 60s orchestral and electronically strange than the original. Very cool.

King Penguin similarly orchestrate The Byrds’ She Don’t Care About Time, though the trademark Byrds guitars are there as well as some psychedelically surreal solos. Nice. But they really go into the stratosphere with 5D (Fifth Dimension), with a swirling droning sitar and ethnic percussion Indian vibe, while never straying from the spirit of the original. This is one of my favorite covers of the entire set.

The Gathering Grey take two by Moby Grape into interesting directions. I Am Not Willing has a surreal, drugged feel, embellished with alien electronic effects and a nifty Beatles-like backward guitar solo. Ditto on the freaky factor with Sitting By The Window. The core song is faithful to the original, and quite beautifully played and arranged, though augmented by fun spaced out effects.

The boxset will be available late September, and as usual this is vinyl ONLY, no CDs or downloads. If interested you better hurry because Fruits de Mer releases sell out QUICK!