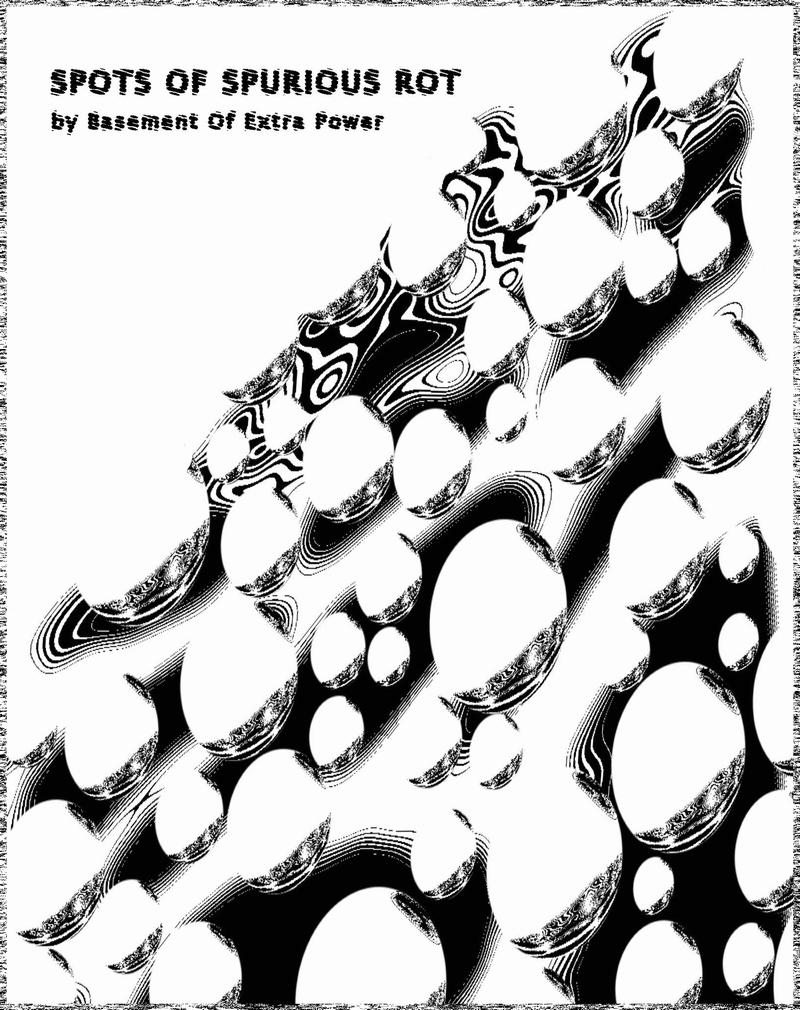 Basement Of Extra Power is the trio of Michael LaGrega, Allan McGinty, and Charles Rice Goff III, whose first self-titled effort was released last year (CLICK HERE to read my comments). Between them they play guitar, bass, synths, keyboards, and a variety of samples, loops, effects, preparations and toys, all of which get a sweaty workout on these recordings made July 10, 2014 at Michael LaGrega’s studio in Leawood, Kansas

Spots Of Spurious Rot consists of two tracks and nearly 50 minutes. The electronics and effects run riot right out of the chute on Blind Spot In Your Mind, like the Forbidden Planet soundtrack merged with an alien circus band. The bass jams along ploddingly, providing a doped rhythmic pulse, as various effects flitter and buzz about, and a computerized voice crops up with bits of narration. This is busy stuff, with multiple elements running parallel. There are floating space electronics that remind me of early Alien Planetscapes, simultaneously accompanied by a Jazzy keyboard, but then an almost symphonic, spaced out Proggy keyboard. The bass gets pretty wild at times and nicely distorted as it continues to anchor and propel the flow of the music. The effects and voice samples come fast and furious, and along with the underlying musical drift it all conjures up some freakishly surreal imagery, all of it not of this world.

Defenestration continues in the same spirit, but at seemingly higher volume and intensity. I like the powerful heavenly symphonic space keys, fractured noise blasts, and on-going parade of voices and effects. The bass continues to lead the way and gets downright groove rocking, and the overall sensation is of a 50s sci-fi avant-arthouse alien insane asylum theme. That’s the effect (on my brain anyway) of bringing together so much at once and somehow making it all work. Like the previous Basement Of Extra Power album this is a fun listen, though full attention is required to appreciate what these guys have stitched together.

Spots Of Spurious Rot can be downloaded for free at: https://archive.org/details/SpotsOfSpuriousRot
If you are interested in a CD, email Charles at: padukem@sbcglobal.net
For a mind boggling array of information and catalog of releases dating back over 30 years, visit the Taped Rugs Productions web site at: http://www.tapedrugs.com