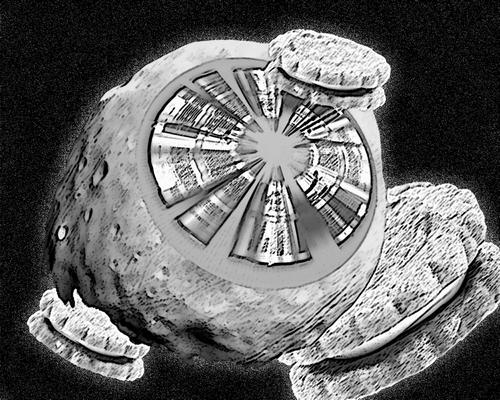 Organic Matter in the Midst of Space is an EP consisting of two space excursions by the duo of Charles Rice Goff III and Michael LaGrega, recorded at LaGrega’s studio in Leawood, Kansas on June 5, 2014. I just reviewed the latest from the Basement Of Extra Power trio of Goff, LaGrega and Allan McGinty, recorded just one month later.

Goff and LaGrega’s space journeys aren’t quite as freaky and surreal Basement Of Extra Power, but there’s nothing run of the mill about this as the duo pack their creations with plenty of strange sounds and a varied assortment occurring at once. The first track, 129 To Nall, features an underlying, gradually phased drone over which a banquet of alien sounds flitter, shimmer and float, including some cool Frippoid soundscape guitar. The Book Of Toluene combines a Tangerine Dreamy sequenced pattern with howling and swelling cavernous atmospherics and shooting star electronics. There’s a symphonic segment I liked with an orchestral melody that played alongside the soundscapes and effects, later joined by what sounded like a spaced out saxophone and some haunting voice samples, making for a cool and strange brew. Maybe a good soundtrack to a story of the lone survivor in the bowels of a space station experiencing the onset of madness. Good fun image inducing space treks.

Organic Matter in the Midst of Space can be downloaded for free at: https://archive.org/details/OrganicMatterInTheMidstOfSpace
If you are interested in a CD, email Charles at: padukem@sbcglobal.net
For a mind boggling array of information and catalog of releases dating back over 30 years, visit the Taped Rugs Productions web site at: http://www.tapedrugs.com