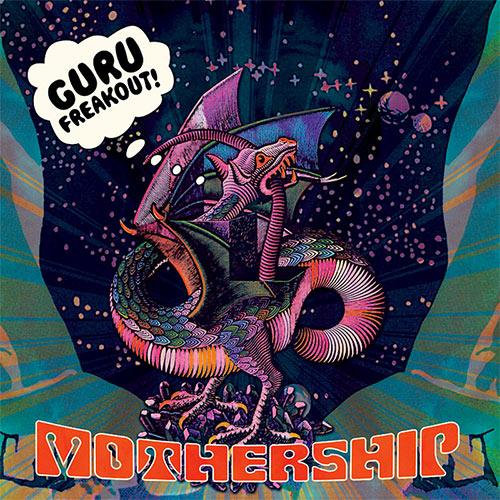 Here’s the backstory: Jurgen Engler of the German industrial band Die Krupps, and who was participated in Nik Turner’s Space Gypsy album, is friends with Krautrock legend Mani Neumeier, drummer and founding member of Guru Guru. Engler apparently resides in Austin, Texas and is also friends with Scott Telles of ST 37. In late 2012 Mani came to Austin to record and play a show Engler had organized. Telles asked Engler if he could meet Mani and next thing you know they’re jamming and recording and the result is the Mothership album.

As you can imagine this is all about classic Kosmiche Krautrock jamming. Notre Dame (Mothership) goes immediately into space, with acid laced wailing and whining guitar. The rhythmic pace starts off slow but steady but soon starts to rock out harder, with Mani’s drums having a jazzy rocking quality and Telles laying down trademark ST 37 grooving bass riffage. Engler’s guitar explores non-stop, tripping out wildly in space, cranking out solos and creating cosmic soundscapes, and throughout sounding like he’s possessed alternately by the spirits of Ax Genrich and Manual Gottsching. A whacking 31 minutes of cosmic jamming bliss. In email communication with Telles I learned that this was the only track on the album recorded in the studio. With the exception of one live track the rest of the album was recorded in Telles’ rehearsal space with a handheld Tascam DR-1 digital recorder, though, as Telles says, “Jurgen doctored it up so well it sounds sonically comparable to the studio piece!” And sure enough, as the nearly 14 minute The Snows of Mt. Bonnell jams away I can’t detect any sound quality differences. This jam continues in similar spirit but gets much more intensely rocking at times and Engler cranks out some incredibly mind-blowing solos.

The remaining three tracks are listed as bonuses, available on the CD only, which I don’t really understand because they are also available on the download and I see no evidence (yet) of an LP edition. A Little Bit Spacier seems an odd title because I can’t imagine these guys going any further into space than they already have. But then I hear Mani’s voice at the beginning asking if they can do precisely that, which is accomplished with the addition of some fun bubbling synth action on this slowly grooving melodic jam. And then we have two versions of Elektrolurch – Mutation, which is a play on the classic Guru Guru track Der Elektrolurch. The first was recorded in Telles’ rehearsal space and the second during a live performance at the Salvage Vanguard in Austin. I chuckled when at the beginning of the live version Mani says this is probably the 957th variation of the song. Of the two versions on the album I definitely like the live one best as its way more spirited and intense and has some crazy electronics.

Overall this is like Guru Guru at their most spaced out, with bits of Ash Ra Tempel at their most freeform jamming, the most effects laden portions of Hawkwind’s Space Ritual, and the Punk pulse of ST 37. Guru FREAKOUT indeed!

For more information and to order the CD or download editions visit http://cleorecs.com, or CLICK HERE to go directly to the Guru Freakout page.