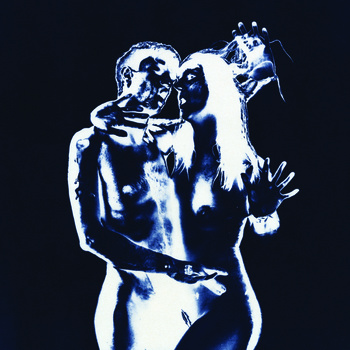 Though the band is new to me, Ultimum Photon A Sole is the seventh album on the Captcha label from Chicago based quintet onYou.

The album consists of 4 tracks and around 35 minutes. The set opens with A Grift, a nearly 12 minute song that’s jam packed with variety. It’s spacey, with a bit of a Motorik pulse. There are Krautrock elements in a Can meets Neu! way. The keyboards are space-symphonic at times, giving the music a Prog edge, but also can be whimsically alien. There are also atmospheric and sometimes freaky Psychedelic segments, as well as an overall accessible Pop feel. If these descriptions sound a bit all over the place it’s not; everything flows quite seamlessly on this Space-Kraut-Pop tune.

Finding the Wronskien is next and is a powerhouse rocker that brings to mind a meeting of early Korai Orom and Circle. The bass and drums are firmly at the helm, propelling the music, as the spaced out and often manic soloing guitar and electronics add color and character and contribute to the fury. I like the bouncy, grooving tribal finale which ends abruptly but immediately launches into The Wronskien, which is really a continuation of the previous track though varying on the theme. It’s a wild rocker with killer, relentlessly soloing guitar, but also an overall tribal feel due to the chant-like vocals. These two tracks together are real SMOKERS!

Adrift On The Wind consists of spacey heavy rocking Prog, and the only track with actual vocals/lyrics. It’s got a high energy drive that’s similar to A Grift, and communicates a white knuckled intensity that kept me on the edge of my seat until reeling in and transitioning to a more ambient but still rocking mode with a grooving but complex and interesting interplay between the guitars and keys. Great stuff. I really need to backtrack and check out these guys previous works.