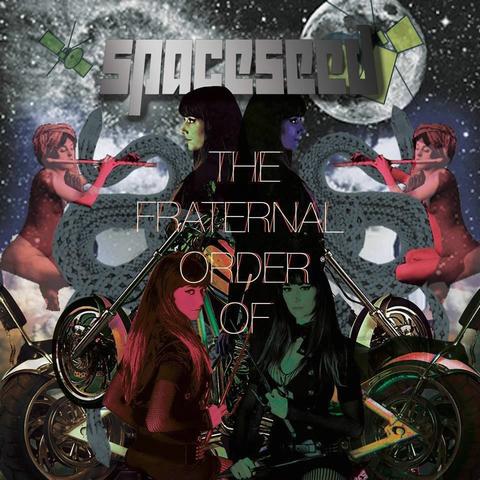 It’s been 5 years since the last Spaceseed album, Architects of Twilight, and the Georgia based good ‘ol boys of Space Rock have reemerged with a stunner. Things got pretty exciting for the band this summer when they jetted across the pond to play the Sonic Rock Solstice festival in the UK, and now the new album, The Fraternal Order Of. Check out the stellar list of guests that help make it all come together – Bridget Wishart, Alan Davey, Alisa Coral, Cyndee Lee Rule, Steve Hayes, and Astro Al contributing some of the lyrics.

The album opens with the full bore Metal assault of Driving Force, which includes a Space Rock jamming mid-section. What They Need Me To Be goes in a different direction, being a tense deep space soundscape and effects excursion with hypnotic narration by Bridget and Cyndee’s screaming Viper violin. They Laughed At The Academy is one of the highlight songs, consisting of heavy driving Hawkwind inspired Space Rock, including vocals by Bridget and Alan on bass. It’s got oodles of freaky electronic effects and voices, all quite craftily incorporated to feel multi-layered and intense but not overdone. Hanger 6 is a short soundscapes, drones and effects interlude that leads into the chunky yet swinging space rock ‘n rolling, and later Metallic rocking Werewolves Of Cascade. Killer guitars! The Empire Of Night is a reworked version of a song from the 2007 Spaceseed album of the same name. The core riff is a monster, and the combination of Astro Al’s lyrics and Radio Ray’s intensely narrative vocals give it a Robert Calvert/Space Ritual vibe on this Space-Metal heavy rocker. The Fraternal Order is a spaced out Punk-Industrial rock ‘n roller that sounds like something from an early Chrome album. Capsule is a high intensity cinematic soundscapes and effects parade that serves as a transition to The Future, which is a reworked and extended version of a song from the 2004 Spaceseed album Future Cities Of The Past Pt. 1. It’s a good time swingin’ Space Rock ‘n Roller that feels like a dance party in the cosmos, and then detours into a Tangerine Dreamy sequenced section with flittering alien effects and whispery narrative from Bridget. Finally, The Last Laugh starts off as pastoral Space-Folk, with beautiful flowing acoustic guitars, dreamy effects and light touch vocals by Bridget, before launching into a hot ‘n heavy Space Rock dirge that brings us to the conclusion.

In summary, this is hands down the best effort from Spaceseed yet. Great songs and instrumentals and outstanding use of effects. Very well constructed and produced. A shoe-in for my Best of 2014 list.

The CD is currently available through Ebay UK. CLICK HERE to order.
A U.S. release is in the works and this space will be updated as soon as it is.