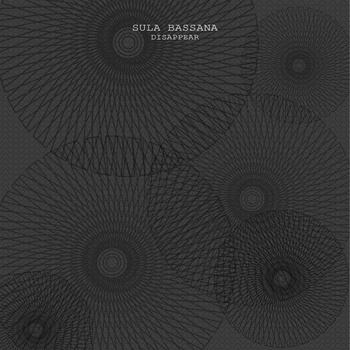 Sula Bassana is Dave Schmidt, who is also in Electric Moon, Krautzone, and a zillion other bands in addition to running the Sulatron Records label. For his side of this split LP we’ve got three tracks, one at 10+ minutes and two shorter tunes. Disappear is the longer piece, which lays down a Kraftwerk vibe with one of the synths, but another that creates whooshing soundscapes, and also adds space guitar licks to the mix. I like the blend of bouncy melodic and trippy Psychedelic elements. Dave adds brief pastoral vocals just past the halfway mark and at this point the pace starts to pick up and becomes more rockin’ liquid Psychedelic, while retaining the underlying Kraftwerk feel. Grong features a mixture of Casio beats, simple organ melody, and guitar that is both atmospheric and intensely, Psychedelically strained. Like Disappear, it’s an interesting blend of the electronic and Psychedelic realms. Finally, Smoof consists of hauntingly orchestral, cinematic Psychedelia with a Spaghetti Western meets atmospheric drones vibe.

3AM is a guitar, loops, drones and vocals solo project from Chino Burga, who is guitarist in the great Peruvian Space/Psych/Stoner band La Ira de Dios. Speedway to Heaven features a frantically and assertively rockin’ beat that leads the way for an ensemble of noise-Psych crashing guitars. The beats aren’t as frantic but are head throbbing insistent on Moonrise, as they provide the oddly robotic rhythmic pulse for this otherwise raw Psych rocker, with blazing guitars that recall La Ira de Dios. Run Through The Jungle is a sinister, dirty Psych rocking cover of the Creedence Clearwater Revival hit. Wrapping up 3AM’s set is the 10+ minute Waves, which is the most minimal/drone oriented of Chino’s four tracks, consisting of a gradually evolving stroll of repetitive phased guitar and atmospheric noise/Psych swells.