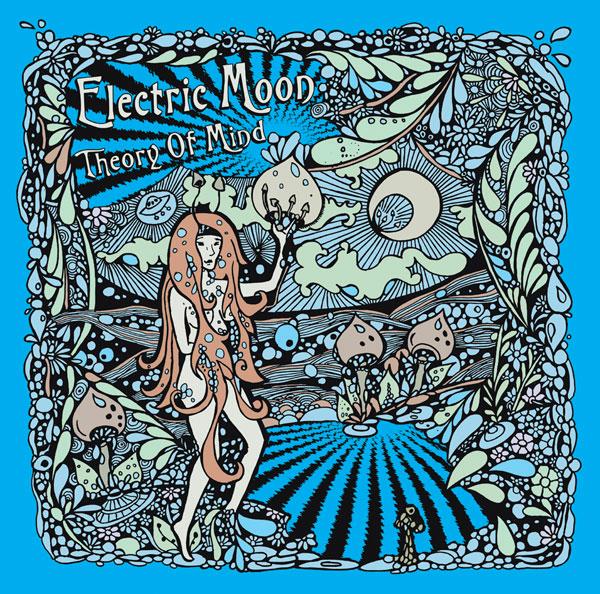 I love the line from the promo sheet for German trio Electric Moon’s new album which says of the music – “It carries the listener in a pulsating and hypnotic manner to the place where the moon sprays it’s electric sparks: Into the endless cosmos of psychedelic music”. Hell freakin’ YEAH it does! I’m on a bit of a high with these musicians right now because I just got done reviewing the new Zone Six album, their first full new one in 11 years and two-thirds of Electric Moon (Sula and Lulu) are in that band too. So covering two Space-Psych monsters chock full of long killer jams in a row has got me feeling a bit giddy.

Recorded in February 2014 at the Kosmodrom in Heidelberg, Theory Of Mind consists of 4 side long jams ranging from 14-19 minutes each. The fun starts with Hypnotika, a pulsating and bubbling cauldron of gradually building cosmic rock that despite its edge-of-your-seat tension still manages to live up to its title. The guitar and synths wash over me in pulsating and droning waves, creating a powerhouse spaced out acid-fuzz vibe, as the rhythm section maintains a stoned, doomy groove. The title track is next and consists of the most loosely dripping liquid Psychedelia imaginable. Imagine Dali’s melting clocks against surreal landscape paintings as an extended Space-Psych jam and you’d get something like this. It’s nicely grooving and melodic too. But be on guard because when it explodes the corrosive acid-space waves and oscillating fireball effects will burn you to a cinder. The Picture starts right out of the chute as a sludgy, crushing Stoner-Doom dirge, and cruises increasingly deeper into space as it progresses to create music that is beautifully cosmic yet mercilessly brutal. Aerosoul is a relief after the exhausting assault of The Picture, starting off with some of the most lightly atmospheric music of the set. But there’s an intermittent bass punch that indicates the mood is about to change. And sure enough, once the acid guitar blasts kick in the intensity level starts to build while holding steady in spacey trance-drone mode.

The characteristic of Electric Moon’s music that I find most magical is their ability to push the limits of stoned, doomy Psychedelic intensity, yet somehow manage to be hypnotic, mesmerizing, trance-inducing, cranium massaging, and any other pick-your-cliché that you care to throw in the pot. But there’s also a Hawkwind Space Rock Blanga element to the music as well, with its relentlessly punishing rhythmic drive and blast into the stratosphere use of effects. Time we left this world today folks…