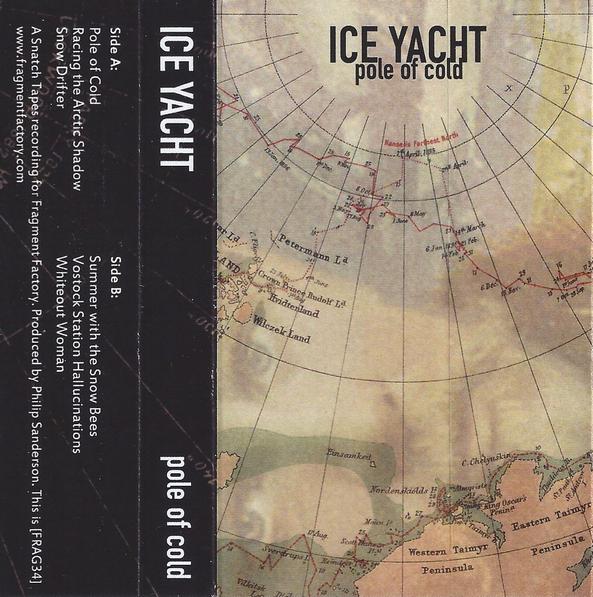 UK based homemade music/cassette culture veteran Philip Sanderson’s Snatch Tapes label released the last of their Snatch DIY compilations in 1981. Snatch 3 included a track by Ice Yacht, who apparently had recorded a full length album though this never materialized back in the day. I’ll quote directly from the promo sheet for the new Pole Of Cold cassette because this is where things get interesting:

Rumour had it that Ice Yacht had embarked on an ill-fated trip to the North Pole attempting to retrace a journey made by the Norwegian explorer Fridtjof Nansen in 1888. This story was given credence when last year a research group uncovered a cassette tape in a vacuum-sealed case in the permafrost. The tape was marked simply Ice Yacht – Pole of Cold. After letting the tape thaw out it was then baked in an oven allowing the transfer of the recordings. Pole of Cold contains six tracks of analogue electronics seemingly mapping an arctic exploration to the coldest place on the planet though exactly when and where they were recorded is unknown.

Is that fun or what? Whether this is genuine mystery music or the latest by Philip Sanderson I couldn’t tell you, because even though Sanderson sent me the tape I chose not to spoil any intentional fun by asking for clarification. So let’s just dive into the music shall we?

The title track opens Side A with an intensely rhythmic rush of analogue electronics. There’s a spaced out symphonic feel, and with the arctic theme in mind the music is conjuring up images of being in a seriously perilous situation at the frozen pole. The outlook seems less dire with Racing The Arctic Shadow, which lays down a robotic yet cool grooving pace that propels us far more into alien than arctic territory. Snow Drifter returns to a more intense mood, sounding like some kind of March Of The Alien Eskimos Space-Industrial dirge that feels like a cross between The Residents and Chrome.

Side B kicks off with Summer With The Snow Bees (cool title). The music brings to mind a space harpsichord playing a pleasantly diddly melody which is augmented by eerie synths while trudging through a pebble strewn landscape. I like how it descends into off-kilter dissonance for the finale before moving into Vostock Station Hallucinations (even cooler title!). This features a hypnotic blend of tribal Jazz percussion, sweeping atmospherics, and hallucinatory melodies that seem to continuously flow and melt into one another. The tape closes with what might be the most wildly freaked out music of the set: Whiteout Women sets a frantically intense pace, as multiple blasts of swirling, bleeping and blaring electronic effects are hurled in and from every direction. But there is order amidst the chaos as the assault is clearly determined and even choreographed in its direction.

In summary, analogue electronics indeed! Fans of experimental/minimal/soundscape and all kinds of old time DIY electronica will really dig these sounds and effects. And musically there is a lot of enjoyable and intriguing variety. Cool stuff. But you better hurry because there are only 100 numbered copies of this “replica”.